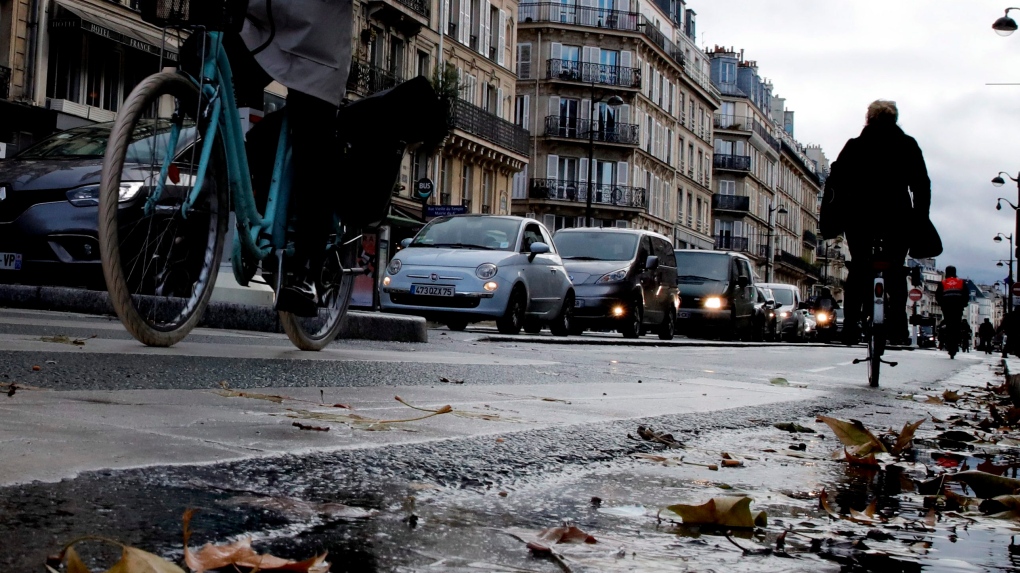 A new law in France will force car companies to place messages in their ads that encourage people to consider greener methods of transportation.

Much like the "Please enjoy responsibly" disclaimers on ads for alcoholic beverages, or health warnings on cigarette packaging, car commercials will be required to display messages that encourage walking, cycling, carpooling or public transit.

These messages include "For short trips, choose to walk or cycle," "Think about carpooling," and "Take public transit daily."

"Decarbonizing transportation is not only switching to electric vehicles. It's also using, when possible, public transit or bicycles," tweeted Barbara Pompili, France's Minister for Ecological Transition.

The new regulations were passed on Tuesday and take effect on March 1. They will apply to ads on TV, in movie theatres, on billboards, in print, online and over radio.

The messages must be written in an "easily identifiable and distinct" space on screen, followed by the hashtag #SeDéplacerMoinsPolluer, which translates to "Move without pollution." For radio ads, the messages must be spoken immediately after the advertisement.

The French government has recently been cracking down on automobile emissions. Private cars account for 15 per cent of France's greenhouse gas emissions and 50 per cent of the emissions related to transportation in the country.

Last year, France passed a weight tax on cars targeting gas-guzzling SUVs. Cars weighing more than 1,800 kilograms or 4,000 pounds would be taxed at a rate of 10 euros per kilogram.

France also passed sweeping new climate regulations last summer that would ban certain cars from dense city centres, require automobile manufacturers to disclose the climate impact of their products in their ads and eventually phase out the sale of diesel and gasoline vehicles by 2040.

The results of the recent coroner's inquest into the police killing of an Indigenous woman in New Brunswick demonstrate the urgent need for an Indigenous-led inquiry into systemic racism, according to the six chiefs of the Wolastoqey Nation.

A 12-year-old Ottawa boy is sharing his story after a magnet fishing trip turned up an unexpected find.

The cooling housing market has left some buyers with mortgages that can't cover the full cost of their home following an appraisal. Toronto-based mortgage broker Mary Sialtsis discusses what options these buyers have.

Why Canada is banning Huawei from participating in Canada's 5G network

The federal government is banning China's Huawei Technologies from involvement in Canada's 5G wireless network. Huawei and the Chinese government have vigorously denied accusations around the danger of spying, saying that the company poses no security threat.

'Buy now, pay later' plans are growing in popularity among Gen Z consumers, driven by influencers on TikTok and Instagram promoting these services. But one personal finance expert says these services can carry serious financial risks for young people.

Foreign Minister Melanie Joly announced a fresh wave of sanctions against Vladimir Putin's regime on Friday including a ban on importing Russian vodka, caviar and diamonds. The ban on the import of certain luxury goods from Russia will tighten the net on the country's elite and covers alcoholic drinks, fish and seafood.