Florida is ditching palm trees to fight the climate crisis 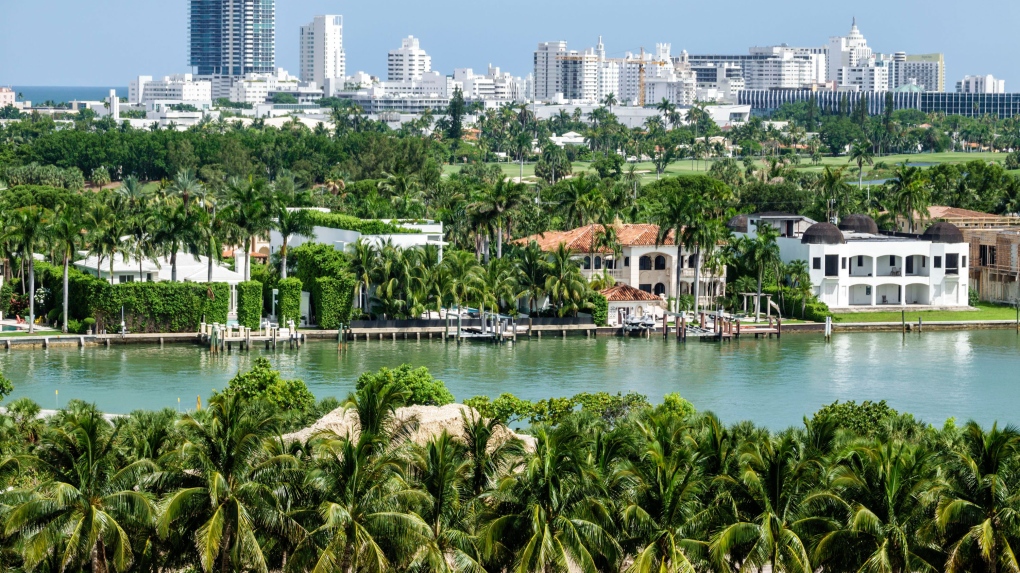 When you think of Florida, beaches and palm trees come to mind. But what if those palm trees were slowly replaced with other trees? That could happen over time because of climate change, and communities in South Florida are trying to save the world from the climate crisis, one tree at a time.

"Palm trees do not sequester carbon at the same rate as our native canopy trees and do not provide shade, cool down streets and sidewalks to help counter the urban heat island effect that canopy trees do," said Penni Redford, the Resilience and Climate Change Manager for West Palm Beach.

With atmospheric carbon dioxide levels today higher than at any point in at least the past 800,000 years, according to the National Oceanic and Atmospheric Administration (NOAA), the Earth needs to remove it or humans have to stop adding it. In fact, the last time carbon dioxide concentration was this high was more than 3 million years ago.

Scientists are working on solutions to capture and safely contain atmospheric carbon. One approach is called "terrestrial sequestration" -- which is essentially planting trees. A tree absorbs carbon during photosynthesis and stores it for the life of the tree.

But Florida's beloved palms are the least effective at carbon sequestration. The average palm in southern Florida only absorbs 5 pounds of CO2 per year.

Compared to other trees -- oaks, mahogany, pines, and cedars -- that can sequester more than 3,000 pounds of CO2 over their lifetime, it may be best to exclude palms in favor of more broadleaf trees or conifers.

The concern is that a standard passenger vehicle emits about 10,000 pounds (4.6 metric tons) of CO2 per year, which means we need a lot of trees to combat the amount of vehicles on the roads.

Even though palms may not be great at carbon sequestration, chopping them down isn't the answer. Instead, programs in both West Palm Beach and Miami Beach, Florida, are taking the initiative to plant trees more adept at handling changing climate conditions.

"Palms, while an iconic part of Miami Beach's landscape, have moved from being an accent plant to a major component of the city's urban forest," it says in Miami Beach's program outline.

Having that many palms will not allow for these cities to handle carbon sequestration nearly as well as they would have with other tree varieties. By 2050, Miami Beach's palms should make up no more than 25% of the public tree population, according to Miami Beach's Rising Above plan.

"Southern Live oak, Quercus Virginiana -- large canopy trees, can withstand occasional floods and hurricanes and are resistant to salt spray, provide habitat for birds and a variety of moss and bromeliads in south Florida," Redford said.

Even without considering logging and deforestation, Mother Nature brings down a lot of trees. As Earth continues to warm rapidly, tree loss from hurricanes and flooding will become even bigger concerns in the future.

However, in the case of palms, the best solution may not be to simply replace them with more palms. Instead, they should be replaced with trees that are better at mitigating the climate crisis.

But we can't blame palm trees alone, since the type of tree is only one piece of the puzzle.

"Yes, tree species matter, some grow faster than others and so their response to elevated CO2 may differ, too," Crous said. "But it is important to distinguish between responses from younger trees compared to older trees."

Scientists set out to study whether you really can teach old trees new tricks to help them adapt to a changing climate.

Young trees and mature trees do not adapt to changes equally. So "just plant more trees" as an effort to combat climate change is not a universal remedy.

Climate change is making hurricanes stronger, knocking down mature trees, and even entire forests, which are needed most to ease climate change.

A joint research study from the University of Birmingham, Western Sydney University, Australian EucFACE , and BIFoR FACE is being done across the globe to study how trees adapt to the increase of carbon dioxide in the atmosphere.

"We aimed specifically to quantify the photosynthetic response (carbon uptake) of these trees to future levels of atmospheric CO2," Anna Gardner said.

It's great news from a carbon mitigation standpoint. We still need to reduce human emissions of greenhouse gases, but knowing that some species of trees are able to adapt to increased levels of CO2 is encouraging.

"Planting trees will certainly help reducing CO2 levels," Crous said. "But as trees take a long time to mature it will be a delayed effect, and we really need to bring emissions down now by including other measures too."

The study looked at a variety of things such as tree age and type to how much sunlight was available.

"The type of tree most certainly matters in this regard. But more so, our climate models are using data from seedlings and young trees to diagnose how old forests will absorb future increases in CO2 in the air," said David Ellsworth, Professor of Tree Physiology at the University of Western Sydney.

That is why it is so important that we save the landscapes and forests with very dense older and mature trees.

"Our CO2 in the atmosphere and its impacts on climate would be far worse if we didn't have these old forests, and that these old forests can adjust and increase CO2 uptake into the future," Ellsworth said.

The study notes that the amount of forest carbon-uptake in the future, and subsequent carbon sequestration, "will be crucial determinants of future atmospheric CO2 concentrations. So, quantifying the photosynthetic response under elevated CO2, especially for mature trees, is critical to understanding the carbon uptake of forests under changing atmospheric composition."

Trees alone will not solve the climate crisis, but they can help if we know how to use them properly.

"We have an active tree planting program," Redford explains about the program they are using in West Palm Beach. The goal is to help Floridians not only beautify their surroundings, but also to better prepare them for a future of global warming. In order to do that, Redford said, you have to be selective.

"We do not use our canopy tree fund to plant palms," Redford said.

Miami is also joining the initiative to shift planting priority to a variety of trees -- just not palms. Miami Beach's Rising Above program to combat the climate crisis includes an urban forestry master plan which details the environmental benefits of planting shade trees, including species such as oak, ash, elm and sycamore, in place of palms.

"It may seem simple to select trees, but it requires thought and planning to have the right tree in the right place -- one that can provide maximum benefits with minimal maintenance and does not contribute to other concerns like fertilizer run off and higher costs for water and maintenance," Redford said.

There's also a plan for when construction leads to the removal of trees. Redford said that if a developer needs to remove trees and cannot replace them, they can pay into a fund for trees to be planted elsewhere.

"Of course, we try first to save the trees or replant on that location," Redford said. "But if it's not possible, we look to plant trees where they are most needed."

Planting trees to remove carbon dioxide from the atmosphere is a critical component of climate change mitigation, experts say. But it's important to be smart about which trees we plant, and to put more focus on saving the older trees we already have.