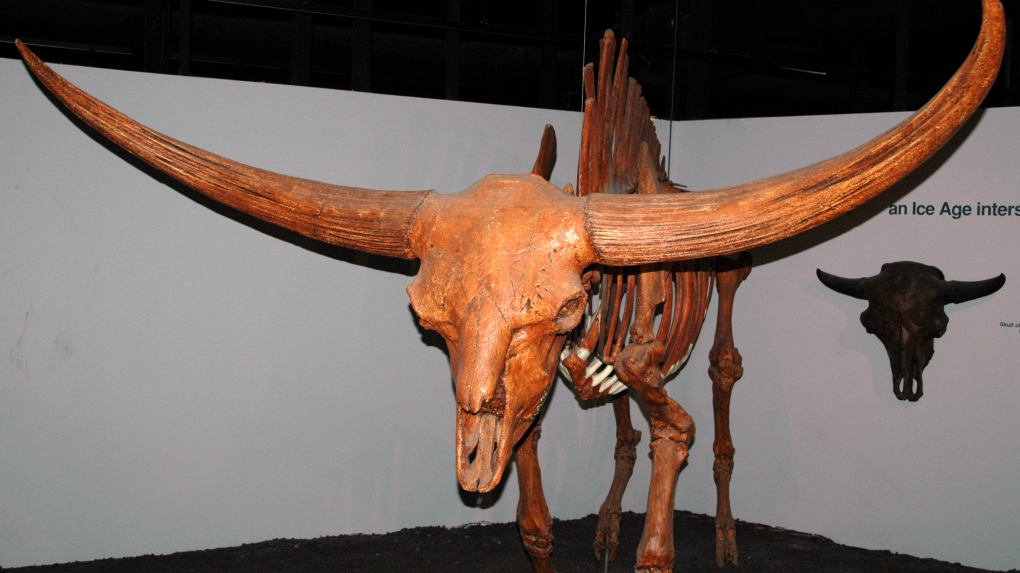 A fossil of a giant bison is seen in a museum. The giant bison is one of several grassland grazers that went extinct during the late Quaternary era. (James St. John/Flickr/CC BY 2.0)

TORONTO -- Thousands of years ago, iconic ancient herbivores, such as the woolly mammoth, giant bison and ancient horses roamed the earth and played an important role for the world's grassland ecosystems. Now, a new study has found that the extinction of these animals may have contributed to an increase in grassland wildfires worldwide.

The study, led by researchers from Yale University and the Utah Natural History Museum, looked at the effects of the late Quaternary extinction, which occurred 50,000 to 6,000 years ago. They published their findings in the journal Science on Thursday.

“These extinctions led to a cascade of consequences,” said corresponding author Allison Karp in a news release. “Studying these effects helps us understand how herbivores shape global ecology today.”

In South America, 83 per cent of the large herbivore species went extinct, the most out of all the continents. North America saw 68 per cent of its species go extinct, while the losses in Australia and Africa were 44 per cent and 22 per cent, respectively.

The researchers set out to see if the extinction of these grazing species could have led to more fires in grassy areas. They believed that a buildup of grass in these ecosystems due to a lack of animals eating the grass could have fuelled an increase in grass fires.

They examined charcoal data from lake sediments taken from 410 sites around the world, which offer evidence of historic fire data. They then compared this data to the percentage of large herbivores that went extinct.

However, the extinction of species that feed on bushes and trees, such as mastodons and giant slots, had little effect on fires in wooded areas.

The authors say their research underscores the important role that grazing livestock and herbivore species play when it comes to mitigating wildfires, as extreme weather events continue to intensify due to climate change.

“This work really highlights how important grazers may be for shaping fire activity,” senior author Carla Staver said in a news release. “We need to pay close attention to these interactions if we want to accurately predict the future of fires.”