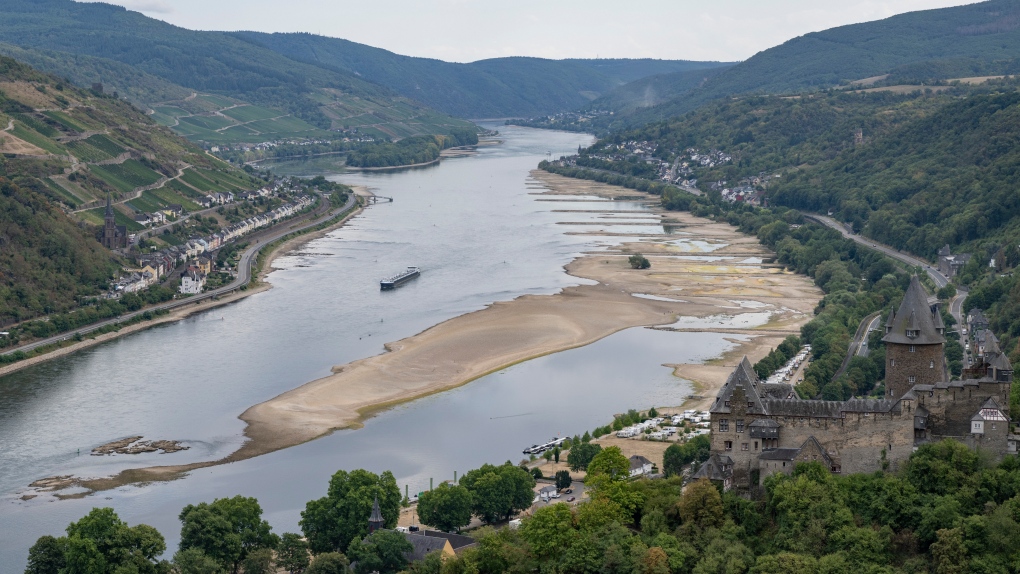 Germany's main industry lobby group warned Tuesday that factories may have to throttle production or halt it completely because plunging water levels on the Rhine River are making it harder to transport cargo.

The Rhine's level at Emmerich, near the Dutch border, dropped by a further four centimetres (1.6 inches) in 24 hours, hitting zero on the depth gauge.

Authorities say the shipping lane itself still has a depth of almost 200 centimetres (six feet, six inches), but the record low measurement Tuesday morning highlights the extreme lack of water caused by months of drought affecting much of Europe.

Loesch said shifting cargo from river to train or transport was difficult because of limited rail capacity and a lack of drivers.

"It's only a question of time before facilities in the chemical and steel industry have to be switched off, petroleum and construction materials won't reach their destination, and high-capacity and heavy-goods transports can't be carried out anymore," he said, adding that this could lead to supply bottlenecks and short-time work might result.

Loesch warned that energy supplies could also be further strained as ships carrying coal and gasoline along the Rhine are affected.

Drivers in southern Germany already have to pay considerably more for fuel than those further north, according to Germany's biggest motor club. The ADAC said diesel was being sold for under 1.82 euros (US$1.84) per liter in Hamburg, while in the southwestern state of Baden-Wuerttemberg it cost on average 1.97 euros.

The BDI said droughts such as that seen this year could become more frequent in the future, and urged the government to help closely monitor water levels and react early to potential transportation problems on Germany's waterways.

Germany's weather service has forecast heavy rain toward the end of the week that could provide some relief to river shipping companies.

'Unheard of': Tens of thousands of salmon found dead in B.C. creek as drought conditions persist

B.C.'s sunny, dry weather is leading to major drought conditions in parts of the province, causing devastating impacts for some wildlife.

More than 16,000 customers are still without electricity 12 days after post-tropical storm Fiona hit the Maritimes on Sept. 23.