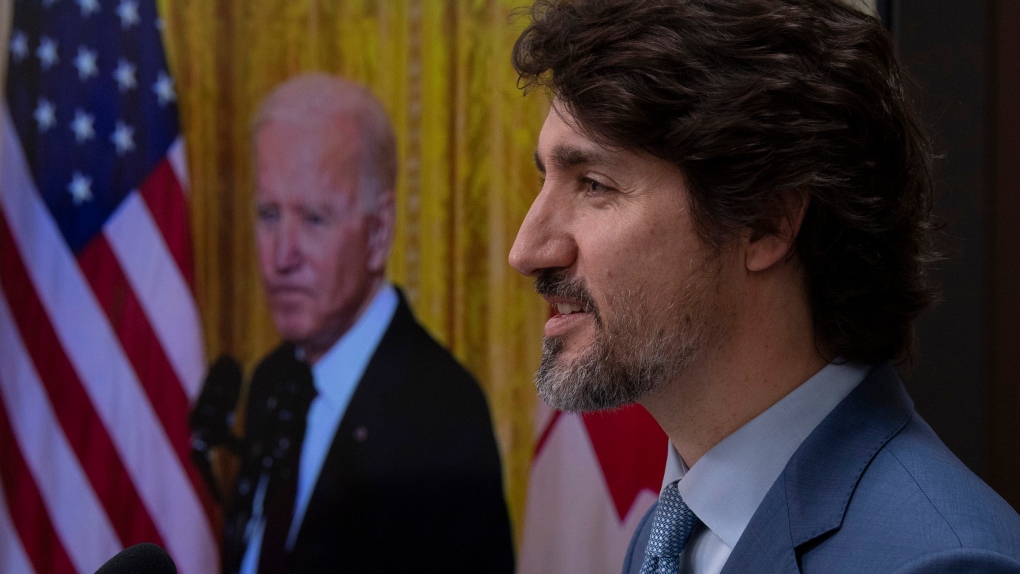 OTTAWA, CANADA -- U.S. President Joe Biden must show he is serious and committed about re-engagement on climate change, Canadian Prime Minister Justin Trudeau said in an interview with AFP ahead of a virtual climate summit opening this week.

Highlighting Washington's return to the front lines of the fight against man-made climate change, the two-day summit starting Thursday will be the first big event on the environment of his presidency, and comes ahead of two other major climate meetings later in the year.

"The commitment that the U.S. has shown after a few years away from the climate table is something that people will be looking to ensure that it is serious, that it is committed," Trudeau told AFP.

"There's no question that we need a country of the scale of the United States to be part of the solution, not part of the problem, if we're going to make it as a planet," he said.

Another big polluter, China, was invited to the summit, but hasn't formally accepted yet.

China, now the world's second-largest economy, and the West have grown increasing at odds over a wide array of issues, from trade and intellectual property to Beijing's crackdown on Hong Kong and Xinjiang.

On Friday, as Trudeau was speaking to AFP, U.S. climate envoy John Kerry visited China, signalling hopes the two sides could work together on climate.

Trudeau acknowledged that China has shown it is "taking seriously the need to reduce their pollution," noting its massive investments, for example, in solar power, electric vehicles and battery technologies.

The West, he said, must step up or risk falling behind.

"I know that Canada and developed countries like us around the world are very interested in ensuring that we're competing with China successfully on new technologies," Trudeau said.

"I'm not going to let China take all the innovations and all the economic growth that's going to come from going greener," he said.

"There are lots of areas in which we disagree with China, but if we can all create a similar momentum on an issue that touches every corner of this planet, then I think that's a good thing."

A PLAN FOR THE FUTURE

"Certainly, as we have said for a long time, you can't have a plan for the future of the economy without having a plan for the environment and for fighting climate change," Trudeau said.

He said the COVID-19 pandemic has changed how people do business and live their lives, "has led us to think differently about telework or travel."

It has also shown, he said, "to what point people can change their behavior, adjust (in) a crisis."

Trudeau didn't point to specific lessons to be drawn from the pandemic and applied to the climate problem, but said "to be ambitious for a better future, everyone agrees these days on that."

It's a message he's shared with other world leaders whom he said have been "very interested in the fact that not only had I brought in a carbon tax, a price on pollution, but I won elections with that at the heart of our campaign."

Trudeau's Liberals, campaigning on strong climate actions, went from third ranked party in parliament to winning a majority in the 2015 general election.

Four years later, his party, tainted by scandals, was returned to office with a minority. But with another election looming in the coming months, Trudeau looks set to regain his majority, according to polls, vowing even stronger climate measures.

Canada pledged under the Paris Agreement to the cut its CO2 emission by 30 percent below 2005 levels by 2030.

Last December, Trudeau announced an accelerated incremental hike of his country's carbon tax on fossil fuels from $50 per tonne in 2022 to $170 per tonne by 2030 -- enough, according to officials, to increase the price of gasoline by nearly 28 cents a litre.

EACH COUNTRY, 'ITS OWN CONTEXT’

The European Union is considering bringing in a carbon levy while the United States has so far resisted imposing one.

On Friday, Trudeau echoed economists' view that a market-based mechanism such as carbon pricing "is a very effective way to reduce emissions."

"When there will be elections, (Canada's carbon tax) will be part of our ambitious plan," he said, "but obviously it does not take just that, it also takes investments in new technologies, it takes support for households to be able to pay for this transition."

"I think the important thing it is to recognize that each country has its own challenges, has its own context," he said. "For us, the price on pollution was absolutely the right thing to do. For other countries it may be more regulations or more investment."

He said "the important thing is that everyone does their part in an ambitious way, not only to protect the planet but to ensure that they have the benefits of this shift that we are in the process of making as a society, as a civilization."

"I look forward," he concluded, "to continuing to have conversations with U.S. President Biden, with European leaders and those around the world to stress that the more ambitious you can be in putting a price on pollution, the better we will be able to generate growth and wealth and jobs for our citizens."