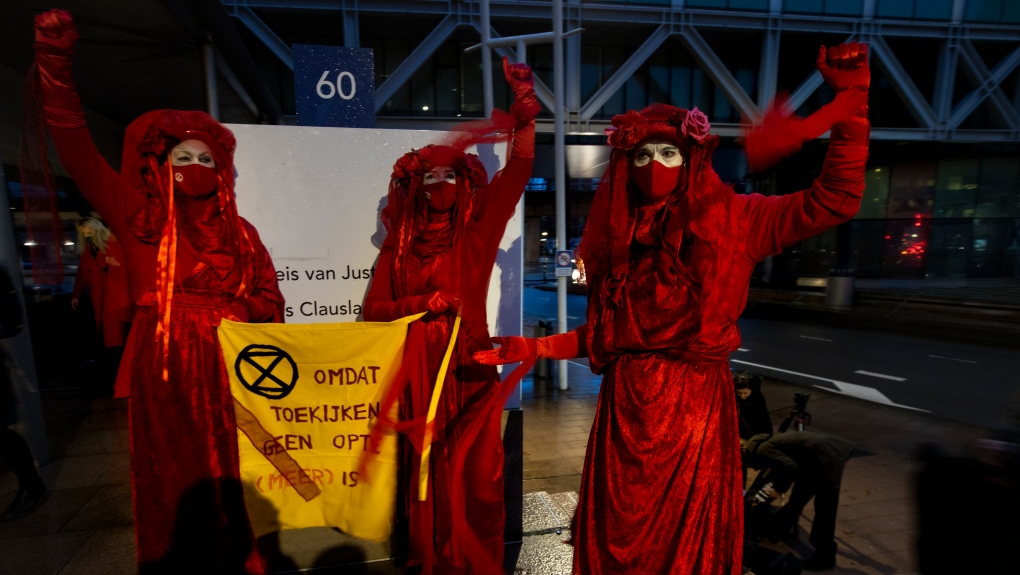 Demonstrators hold a banner reading "standing by and watching is no longer an option" outside the court building prior to the start of the court case of Milieudefensie, the Dutch arm of the Friends of the Earth environmental organization, against Shell in The Hague, Netherlands, Tuesday, Dec. 1, 2020. (AP Photo/Peter Dejong)

THE HAGUE, NETHERLANDS -- A group of environmental organizations backed by thousands of Dutch citizens launched a civil case Tuesday against the energy giant Shell, asking a court to order the multinational to commit to reining in its carbon emissions by 45% by the year 2030.

"The claimants therefore conclude that Royal Dutch Shell's corporate policy is on collision course with global climate targets," Cox said as he opened four days of hearings spread over the coming weeks.

Shell lawyers were to make their opening statement later Tuesday.

The legal battle led by Milieudefensie, the Dutch arm of Friends of the Earth, is the latest in a string of cases around the world in which activists are using the courts as a venue to fight for action to reduce greenhouse gas emissions from governments and companies.

A victory for climate activists in a Dutch courtroom could spur even more legal challenges.

"Everybody needs to pitch in if we are to tackle the climate crisis, especially big polluters like Shell. But Shell and its shareholders are not taking their responsibility, that's why we are taking legal action," said Nils Mollema of ActionAid Netherlands, another group involved in the case.

Ahead of the opening of hearings, Shell said that it agrees with Friends of the Earth that action is needed to cut emissions and has already invested billions of dollars in low-carbon technologies from wind power to electric vehicle charging. But it said the company cannot do it alone.

"What will accelerate the energy transition is effective policy, investment in technology and changing customer behaviour. None of which will be achieved with this court action," Shell said in a statement to The Associated Press. The company said it has set "an ambition to be a net zero emissions energy business by 2050, or sooner."

Under the 2015 Paris climate change agreement, the European Union's greenhouse gas emissions target is a reduction by at least 40% by 2030 compared to 1990 levels.

The Shell case, which has more than 17,000 claimants, follows in the footsteps of a groundbreaking 2015 court ruling -- later upheld by an appeals court -- that ordered the Dutch government to cut the country's greenhouse gas emissions by at least 25% by 2020 from benchmark 1990 levels.

Dutch Prime Minister Mark Rutte responded by saying: "I can guarantee we will do everything we can to achieve the goal." But it remains to be seen if the target will be met by year's end.

The Urgenda and Shell cases are similar because they are based in part on a duty of care enshrined in Dutch law.

Not all climate cases are successful. Last month, German judges threw out a lawsuit by three farming families who had taken Chancellor Angela Merkel's government to court and argued that it wasn't doing enough to tackle climate change.

Roda Verheyen, a German lawyer who brought that case but is not involved in the Dutch case, said the outcome of the civil case against Shell could have repercussions for businesses around the world as it poses questions about how businesses balance their bottom line with their duty of care responsibilities.

"The Shell case taken by Milieudefensie and others is the first to actually do this in court," she said. "So whatever comes out will be very interesting. I think you could say globally."