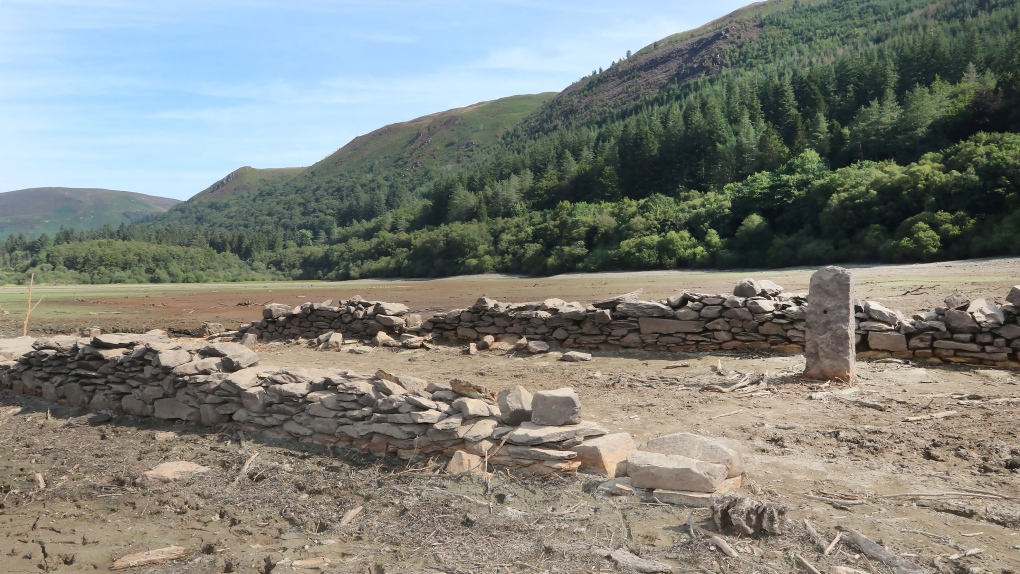 Lake Vyrnwy -- a reservoir in Powys, Wales -- has evaporated enough to expose the vestiges of the village Llanwddyn. (Phil Blagg Photography/CNN)

Unlike the lost city of Atlantis, when this 19th century Welsh village was submerged underwater, it only took a dry spell for it to resurface and reveal its ruins.

Lake Vyrnwy -- a reservoir in Powys, Wales -- has evaporated enough to expose the vestiges of the village Llanwddyn.

Remnants of the village were last visible during the drought of 1976, local media reports.

After endless weeks of scorching, record-breaking high temperatures across the U.K., Lake Vyrnwy is one of many rivers and reservoirs to have shrunk.

According to the U.K. Met Office, record temperatures for Wales were observed on July 18 in the northeastern county of Flintshire, reaching 37.1 degrees celsius (98.8 degrees Fahrenheit), about 45 miles (72 kilometres) from Lake Vyrnwy.

Photographer Phil Blagg told CNN Tuesday that parts of the village started appearing a week ago, but he waited until the last moment before the rain to capture the ruins when the water was at its lowest.

Blagg, who has lived in central Wales for 28 years and has visited the lake on multiple occasions, took the photos on Saturday.

"The most amazing thing I saw was the bridge on the road that went over the stream in the village," he said. "(In the 1800s) it was flooded and now, 140 years on, you can see it again, almost how it looked back then."

"You can clearly make out the road by the tree stumps in a line. Gate posts (are) still in place, (as are) parts of the houses and village walls," he added.

Lake Vyrnwy was the largest artificial reservoir in Europe when the 10-year construction was completed in 1891 to supply fresh water to the north England city of Liverpool.

When the valley of the River Vyrnwy closed to build a dam to restrict the river flow, the village of Llanwddyn -- including the church cemetery -- was relocated, before the former village was submerged.

According to Hafren Dyfrdwy, the water and waste company that manages the reservoir, the village consisted of a Parish church, two chapels, three inns, 10 farmhouses and 37 houses, the ruins of which can be seen today.

A Hafren Dyfrdwy spokeswoman told CNN on Tuesday that the changed landscape has sparked a lot of interest in the lake, adding they have been inundated with calls.

With a death toll nearing three dozen, rescuers searched on Saturday for survivors among the Florida homes ruined by Hurricane Ian, while authorities in South Carolina began assessing damage from the powerful storm's strike there as stunned residents began the painstaking task of surveying their losses.