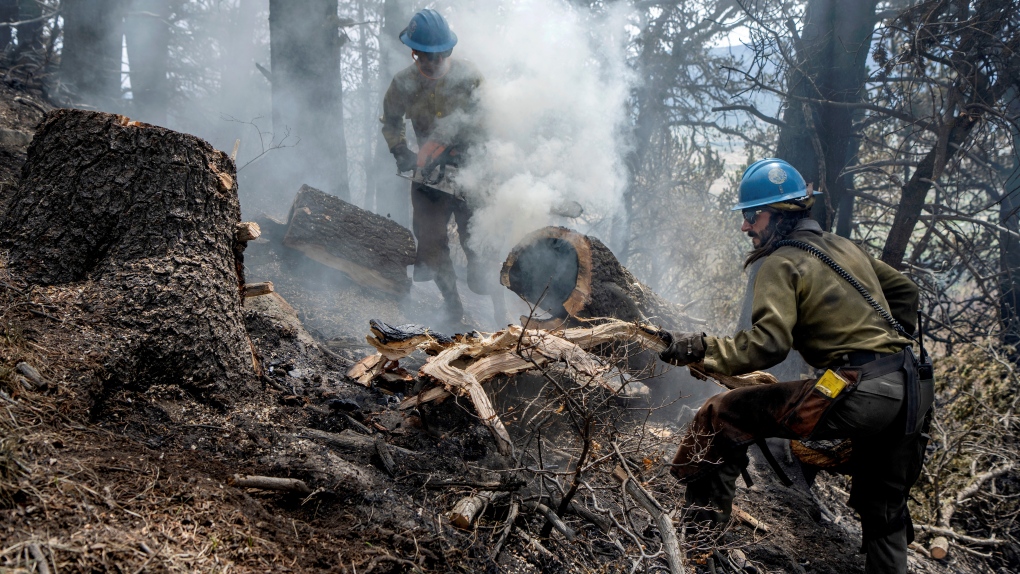 Carson Hot Shots Henry Hornberger, left, and Tyler Freeman cut up a hollow tree that was burning on the inside, Monday May 23, 2022, as they and their co-workers work on hot spots from the Calf Canyon/Hermits Peak Fire in the Carson National Forest west of Chacon, N.M. (Eddie Moore/The Albuquerque Journal via AP)

Warnings of critical fire conditions blanketed much of the U.S. Southwest on Saturday, as crews in northern New Mexico worked to stop the growth of the nation's largest active wildfire.

The 7-week-old fire, the largest in New Mexico history, has burned 491 square miles (1,272 square kilometres) of forest in rugged terrain east of Santa Fe since being started in April by two planned burns.

Crews were patrolling partially burned areas and clearing and cutting containment lines, including primary ones near the fire as bulldozers scraped backup lines farther away.

The return of return of drier and warmer weather with stronger winds posed a threat of increased fire activity over the Memorial Day weekend, prompting officials to urge the public to secure vehicle chains and to be careful with possible fire sources.

The strong winds could fan flames and cause the fire to jump containment lines and race forward, said John Chest, a fire operations manager.

“Imagine travelling in your car and the fire can outpace you. That’s the kind of extreme fire behaviour that we’re talking about,” Chester said.

Nearly 3,000 firefighters and other personnel were assigned to the fire, which was contained around 48% of its perimeter.

Initial estimates say the fire has destroyed at least 330 homes but state officials expect the number of homes and other structures that have burned to rise to more than 1,000 as more assessments are done.

Elsewhere, 150 firefighters battled a wind-driven fire that burned 9 square miles (24 square kilometres) of grass, brush and salt cedar about 14 miles (22.5 kilometres) southwest of Parker, Arizona. Winds up to 30 mph forced the California blaze to jump the Colorado River into Arizona on Saturday afternoon.

The fire forced the evacuation of a recreational vehicle park after starting Thursday and was 44% contained, officials said.

The cause of the fire was under investigation.

The Bank of Canada's strategy of rapidly increasing its key interest rate in an effort to tackle skyrocketing inflation will likely trigger a recession, a new study from the Canadian Centre for Policy Alternatives (CCPA) says.

The annual gathering of the Assembly of First Nations is being held this week in Vancouver under a cloud of criticism from its national chief, who has been suspended and denied entry to the meeting.

Travelling soon? Here's how to have a stress-free airport experience

A day after Russian President Vladimir Putin declared victory in seizing an eastern Ukraine province essential to his wartime aims, a city in the path of Moscow's offensive came under sustained bombardment, its mayor said Tuesday.

A new U.S. study shows that in high-trust neighbourhoods, those with a larger dog population had robbery rates that were almost two-thirds lower and murder rates that were cut in half.

Climate change protesters targeted a copy of Leonardo da Vinci's 'The Last Supper' at London's Royal Academy of Arts Tuesday, gluing themselves to the painting's frame and spray-painting 'No New Oil' next to it.