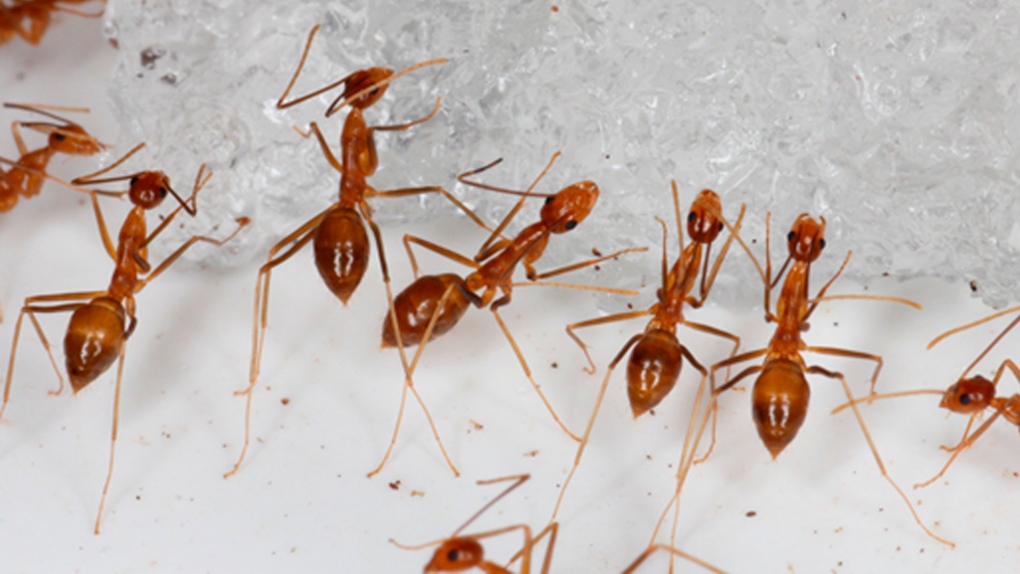 HONOLULU, HAWAII -- An invasive species known as the yellow crazy ant has been eradicated from a remote U.S. atoll in the Pacific.

The U.S. Fish and Wildlife Service announced Wednesday that the ants have been successfully removed from Johnston Atoll National Wildlife Refuge.

The ants stalk seabirds on the uninhabited atoll and prevented nesting on about 70 acres of land.

"This is the first time an invasive ant species has been eradicated on such a large land area in the U.S," said Kate Toniolo, superintendent for the Pacific Remote Islands Marine National Monument, in a statement. "To ensure the eradication was successful, the teams have been monitoring, searching, and surveying for yellow crazy ants."

For about a decade, the ants have threatened the seabirds by swarming their nests -- and anything else on the ground.

The ants spray formic acid on the birds, causing injuries including blindness and even death, Fish and Wildlife Service officials said.

Volunteers and federal workers comprised so-called Crazy Ant Strike Teams that experimented with baits and other techniques to get rid of the pests.

After the teams killed off the yellow crazy ants, two dogs trained to sniff out the species were brought in to search the grounds. The dogs sniffed nearly 120 miles without finding any ants, according to federal officials.

"While the mission of the Crazy Ant Strike Team is complete, the (U.S. Fish and Wildlife) Service will continue to focus on habitat restoration, preventing the spread of other invasive species," said Stefan Kropidlowski, deputy superintendent for the Pacific Remote Islands Marine National Monument. "For now, we celebrate that the refuge is once again a safe haven for the amazing seabirds that call this incredible place home."

Johnston Atoll is a refuge for tens of thousands of seabirds from 15 different species, according to the U.S. Fish and Wildlife Service.

It's home to the world's largest colony of red-tailed tropicbirds and is the only seabird habitat in over 570,000 square miles (nearly 1.5 million square kilometers) of open ocean.

The yellow crazy ant is native to Southeast Asia but has been unintentionally introduced to other parts of the Pacific, including Hawaii.

Yellow crazy ants "are a widespread and extremely harmful invasive ant. They have spread throughout all the main Hawaiian Islands and cause significant ecological harm to plants and animals, like the endangered Hawaiian yellow-faced bee and nesting birds," said Sheldon Plentovich, U.S. Fish and Wildlife Service's Pacific Islands Coastal Program Coordinator.

Plentovich said the ants have not made their way to Papahanaumokuakea Marine National Monument in the Northwestern Hawaiian Islands, but they "are very good hitchhikers and we are vigilant about biosecurity and monitoring for early detection within the monument."

Plentovich said crazy ants got their name because of their fast and erratic movements, especially when disturbed.

Johnston Atoll is one of the most isolated places on Earth and part of the Pacific Remote Islands Marine National Monument. It's about 820 miles (1,320 km) southwest of Honolulu.