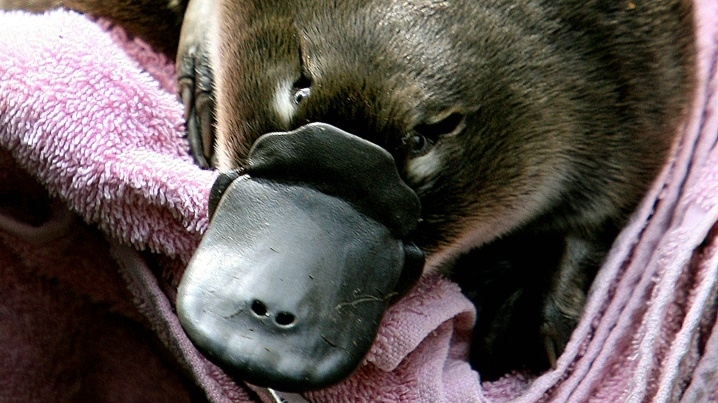 A baby platypus at Taronga Zoo in Australia. (AFP)

SYDNEY, AUSTRALIA -- The world's first dedicated platypus refuge will be established to rescue the unique Australian animals from climate change-fuelled crises, as bushfires and drought increasingly threaten their habitat.

Taronga Zoo announced it will build the facility in Dubbo, five hours northwest of Sydney, to provide emergency care to the river-dwelling, duck-billed mammals when disasters strike.

With capacity to house up to 65 platypuses, it will also be used as a research facility to study the reproductive biology of the egg-laying animals, which are notoriously difficult to breed in captivity.

Phoebe Meagher, a wildlife conservation officer at Taronga, said the project was prompted by a prolonged drought and Australia's 2019-2020 "Black Summer" of bushfires that devastated platypus habitats.

"We were just inundated with phone calls and emails asking us to come and help rescue platypus," she told AFP.

"The drought and bushfires hit New South Wales really hard and there was just nowhere for these platypus to go."

Scientists have estimated three billion animals died in the bushfires.

Even before that, platypuses were under threat.

A January 2020 survey estimated the total platypus population has plummeted by 50 percent since European settlement of Australia two centuries ago.

An earlier study published in November 2018 estimated the population had fallen by 30 percent over that period, to around 200,000.

Meagher said Taronga was able to save and later release seven of the monotremes back into the wild, but hopes the purpose-built refuge will allow larger-scale rescues in the future to help protect the species from extinction.

"We will hold them for as long as conditions mean that we have to... we can hold for years if we have to (but) that's not what we want to have to do," she said.

The refuge, which will also be used as an aquatic rehabilitation facility, is due to be completed by 2022.