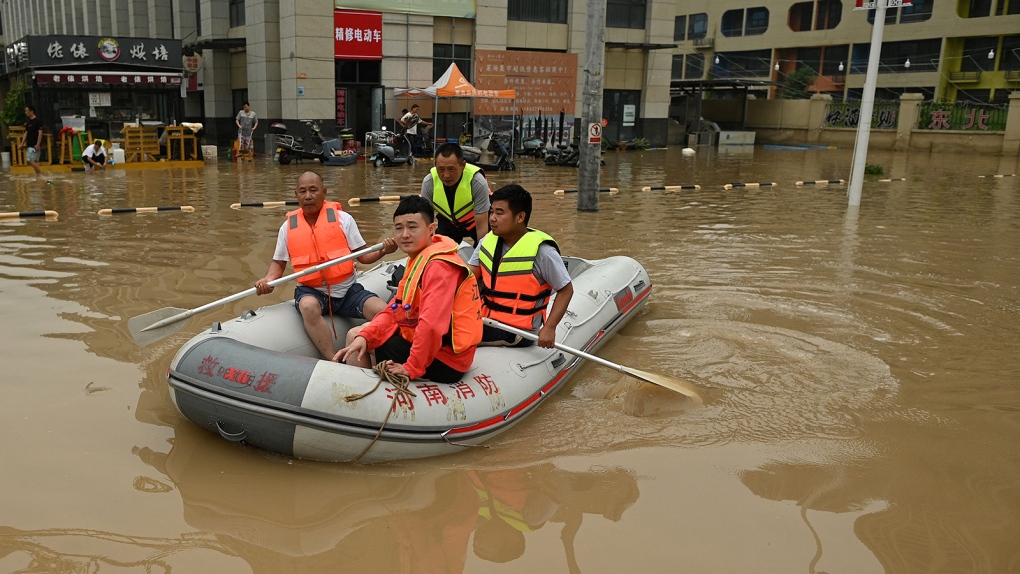 Dozens of Chinese officials have been punished over their response to devastating floods that killed hundreds last July, pictured here, in Zhengzhou, China, on July 23, 2021 after a government investigation found authorities had under-reported deaths and deliberately withheld information. (Noel Celis/AFP/Getty Images)

Dozens of Chinese officials have been punished over their response to devastating floods that killed hundreds last July, after a government investigation found authorities had under-reported deaths and deliberately withheld information.

The flooding in the city of Zhengzhou, capital of central Henan province, left 398 people dead or missing. Torrential rains submerged entire neighborhoods and subway stations, drowning many people in vehicles and underground spaces, while others were caught in landslides and house collapses.

The Chinese Communist Party launched an investigation after the disaster and released its findings on Friday, concluding the city's government and other local bodies were "guilty of negligence and dereliction of duty."

Zhengzhou authorities "concealed or delayed the reporting of those killed and missing in the disaster," according to state news agency Xinhua. "They did not tally and report casualties on a daily basis as required, and have deliberately impeded and withheld reports of up to 139 cases."

Different departments in Henan illegally reported false numbers of missing people and blocked the reporting process, said the report, which was overseen by the Party's Central Committee and the State Council.

In recent months, hundreds of local officials have been fired or punished for failing to contain outbreaks of Covid-19.

According to the Henan floods report, a total of 89 civil servants were punished, including the mayor of Zhengzhou and three deputy mayors. Xu Liyi, the Zhengzhou Party Secretary and the city's top official, was removed from his position and given "a serious warning within the party."

Police detained and will pursue criminal charges against eight other people.

Once the disaster hit, authorities mishandled the emergency response and moved too slowly, hampered by unnecessary bureaucracy and "formalities for formalities' sake."

The scale of the disaster also highlighted major issues with Zhengzhou's infrastructure and urban planning that had been overlooked during the city's rapid development, the report found. For instance, it has only 2,400 kilometers (1,491 miles) of storm sewer pipelines -- about half that of similar sized cities.

The report pointed to two deadly events that went viral on social media and drew widespread horror: the flooding of a subway station, with some passengers trapped in train cars for hours up to their necks in water, and the flooding of an underground tunnel where travelers were trapped in their cars.

These incidents were preventable "casualties that shouldn't have happened," exacerbated by authorities' delayed response, the investigation committee said.

The flooding also hit smaller cities and villages, with rivers swelling beyond warning levels and numerous reservoirs overflowing. In total, nearly 14.8 million people across the province were affected by the disaster, the report found.