China is seeding clouds to replenish its shrinking Yangtze River

China is seeding clouds to replenish its shrinking Yangtze River 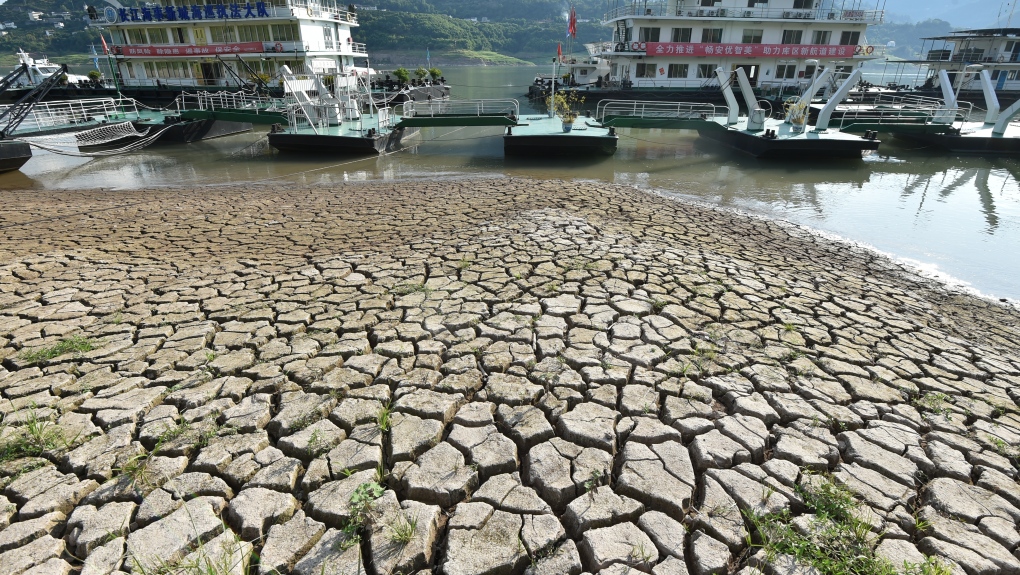 A cracked riverbed in a section of Yangtze River in Yunyang, Chongqing, is shown here on August 16. (Visual China Group/Getty Images)

Chinese planes are firing rods into the sky to bring more rainfall to its crucial Yangtze River, which has dried up in parts, as swaths of the nation fall into drought and grapple with the worst heat wave on record.

Several regions on the Yangtze have launched weather modification programs, but with cloud cover too thin, operations in some drought-ravaged parts of the river's basin have remained on standby.

The Ministry of Water Resources said in a notice on Wednesday that drought throughout the Yangtze river basin was "adversely affecting drinking water security of rural people and livestock, and the growth of crops."

The silver iodide rods -- which are typically the size of cigarettes -- are shot into existing clouds to help form ice crystals. The crystals then help the cloud produce more rain, making its moisture content heavier and more likely to be released.

Cloud seeding has been in practice since the 1940s and China has the biggest program in the world. It used seeding ahead of the Beijing Olympics in 2008 to ensure dry weather for the event, and the technique can also be used to induce snowfall or to soften hail.

At least 4.2 million people in Hubei have been affected by a severe drought since June, Hubei's Provincial Emergency Management Department said Tuesday. More than 150,000 people there have difficulties accessing drinking water, and nearly 400,000 hectares of crops have been damaged because of high temperatures and drought.

The Yangtze is just one of many rivers and lakes across the northern hemisphere that are drying up and shrinking amid relentless heat and low rainfall, including Lake Mead in the US and the Rhine River in Germany. These extreme weather conditions have been supercharged by the human-induced climate crisis, driven by burning fossil fuels.

Communities often rely on these bodies of water for economic activity and governments are having to intervene with adaptation measures and relief funds, costing huge amounts of money.

China is deploying such funds and developing new supply sources to deal with the impacts on crops and livestock. Some livestock has been temporarily relocated to other regions, the Ministry of Finance said earlier this week, adding it would issue 300 million yuan ($44.30 million) in disaster relief.

The heat also forced authorities in the southwestern province of Sichuan -- home to around 84 million people and a key manufacturing hub -- to order the shutdown of all factories for six days this week to ease a power shortage.

China issued its highest red alert heat warning for at least 138 cities and counties across the country on Wednesday, and another 373 were placed under the second-highest orange alert, the Meteorological Administration said.

As of Monday, China's heat wave had lasted 64 days, making it the longest in more than six decades, since full records began in 1961, the National Climate Center said in a statement. It also said it was the "strongest" on record and warned that it could worsen in the coming days.

"The heat wave this time is prolonged, wide in scope, and strong in extremity," the statement read. "Taken all signs together, the heat wave in China will continue and its intensity will increase."

The heat wave has also registered the largest number of counties and cities exceeding 40 degrees Celsius (104 degrees Fahrenheit) since records began, according to the statement. The number of weather stations recording temperatures of 40C and above has reached 262, also the highest. Eight have hit 44C.

Persistently high temperatures are forecast to continue in the Sichuan Basin and large parts of central China until August 26.

A "special case" of high pressure from the West Pacific subtropical high, stretching across much of Asia, is likely to be the cause of the extreme heat, said Cai Wenju, climate researcher with CSIRO, Australia's national scientific research institute.

The Danish prime minister said Tuesday that she 'cannot rule out' sabotage after three leaks were detected on Russian natural gas pipelines running under the Baltic Sea to Europe.