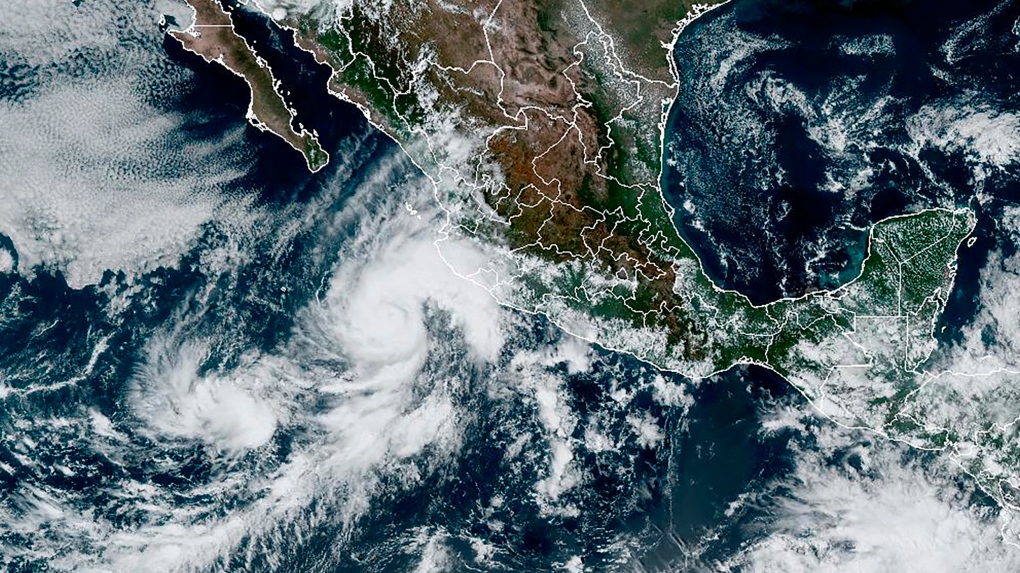 This satellite image taken at 20:20 UTC and provided by NOAA shows Tropical Storm Orlene on Oct. 1, 2022. Orlene grew to hurricane strength Saturday and is heading for an expected landfall early next week on Mexico's northwestern Pacific coast. (NOAA via AP)
MEXICO CITY -

Hurricane Orlene lost some punch, but remained a dangerous Category 3 storm on Sunday as it headed toward Mexico's northwest Pacific coast between the tourist towns of Mazatlan and San Blas.

After growing into a hurricane Saturday, Orlene quickly added power, peaking as a Category 4 hurricane with maximum sustained winds of 130 miles per hour (215 kilometres per hour) early Sunday, according to the U.S. National Hurricane Center. But winds slipped back to 115 mph (185 km/h) by late Sunday.

The storm was moving over or near the Islas Marias, a former prison colony being developed as a tourist draw. The island is sparsely populated by government employees and buildings there are made of brick or concrete.

By late Sunday, Orlene was centred about 80 miles (125 kilometres) west-northwest of Cabo Corrientes — a point of land that juts into the Pacific just south of Puerto Vallarta — and was headed north at 8 mph (13 km/h) early Sunday.

A hurricane warning was in effect from San Blas to Mazatlan.

The government of Jalisco state, where Puerto Vallarta is located, suspended classes Monday in towns and cities along the coast.

In Sinaloa, where Mazatlan is located, some emergency shelters were opened.

The centre said the storm would likely begin weakening as its moved closer to land. But it was still projected to hit as a hurricane.

It could bring flood-inducing rainfall of up to 10 inches (25 centimetres) in some places, as well as coastal flooding and dangerous surf.

A firearm advocacy group says the Liberal government's effort to ban a wide variety of rifles is being driven by ideology, not public safety.

A top European Union official warned Elon Musk on Wednesday that Twitter needs to beef up measures to protect users from hate speech, misinformation and other harmful content to avoid violating new rules that threaten tech giants with big fines or even a ban in the 27-nation bloc.