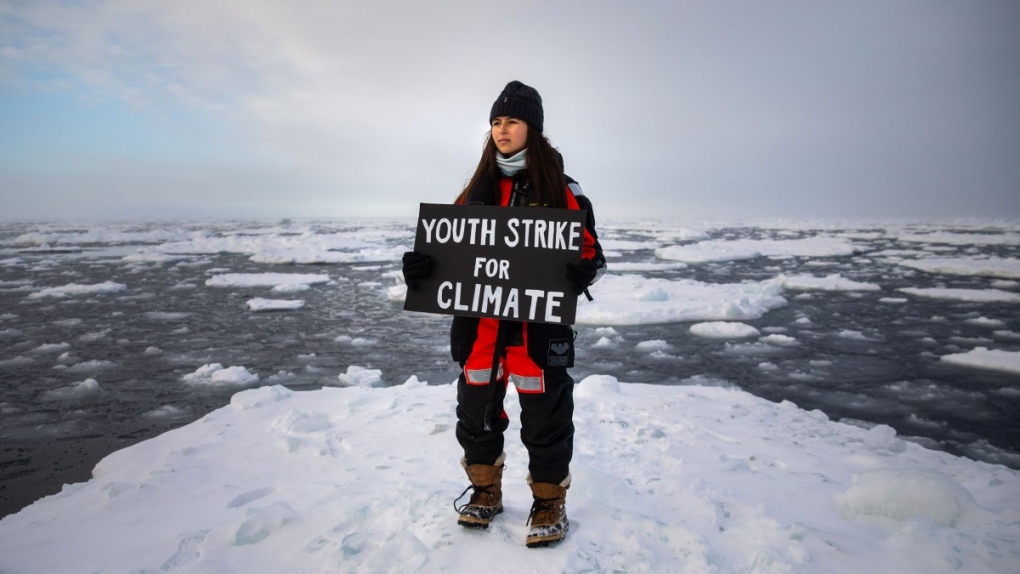 A British teenager has staged a protest against climate change inside the Arctic Circle.

In the world's most northerly climate strike, Mya-Rose Craig, a passionate ornithologist and nature, climate and equal rights campaigner, was photographed protesting on an ice floe at the Arctic ice edge, north of Svalbard, at 82.2° North earlier this week.

The 18-year-old, who lives near the southwestern English city of Bristol, held up a placard saying "Youth Strike for Climate." She spent five hours on the ice, a spokesperson for environmental organization Greenpeace told CNN.

Craig, who says on her Twitter page that she is the youngest person to have seen half the world's birds, arrived in the Arctic on board the Greenpeace ship Arctic Sunrise as part of an expedition documenting the impact of the climate crisis and investigating marine life in the region.

The journey, which started from Norway in early September, was timed to coincide with next week's United Nations Summit on Biodiversity, where "marine protection should be front and center to any discussions about protecting biodiversity," Greenpeace said in a statement.

September 25 has been declared a global climate action day by Fridays for Future, a global strike movement that started in August 2018, when Greta Thunberg, then aged 15, launched her climate protest.

In a statement issued by Greenpeace, Craig said: "I'm here because I want to see for myself what's at stake as this crucial protector of the planet, the Arctic Ocean, melts away at a terrifying rate. Today, myself and Fridays For Future activists from all over the world are standing up to call for urgent action against climate breakdown.

"I'm here to demand that our leaders come together and create ocean sanctuaries to protect this essential but fragile place and at least 30 per cent of our oceans. There is still time to turn things around towards more sustainable energies and lifestyles, and that moment must be now."

Craig told CNN that the trip had been a "once in a lifetime experience," in more ways than one.

"It feels like a once in a lifetime experience, not only because it has been an amazing trip, but also because I am hyper-aware that the Arctic is disappearing.

"I have been a climate activist for years but now it has really sunk in just how urgent this issue is.

"Looking out from the ship it was so easy to picture it all slowly melting and disappearing in the coming two decades."

Earlier this week, scientists from the National Snow and Ice Data Center (NSIDC) at the University of Colorado Boulder said the Arctic sea ice, or the floating ice cover of the Arctic Ocean, had reached its minimum extent for the year, shrinking to the second lowest extent since record-keeping began in 1978.

Craig, who has just finished high school, is taking a year out before studying politics and international relations at university next year.

According to Greenpeace, she is one of millions of youth activists and climate strikers demanding action and accountability from global leaders in "tackling the commodification of nature for profit."

Earlier this year she shared a platform with Thunberg, addressing 40,000 people in Bristol.

On why young people like herself and Thunberg are demonstrating, she told CNN: "I really wanted to convey how, as a young person, I feel incredibly desperate about this issue and I feel it's extremely urgent.

"It makes me really angry when politicians and world leaders don't take action on climate change -- it isn't their future that's melting down the drain.

"This movement of young people has been so exciting to me. It has the potential to be revolutionary because protests and strikes like this are finally giving young people a voice. People are finally sitting down and listening to us about how we feel about our future."

Posting on Facebook earlier Friday, Craig wrote: "It has taken me weeks to travel by road and boat to the Arctic edge to bear witness to the Sea Ice Minimum, the lowest level of the ice at the end of each summer. Today, I took part in the most northerly Youth Strike ever, to bear witness to the low ice level and ask you to amplify my voice and those of other young people around the world and demand that our leaders take action now when they meet at the UN General Assembly soon."