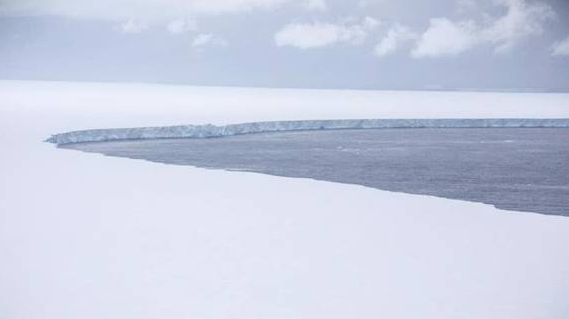 TORONTO -- The world’s largest iceberg has been captured on camera drifting through the Southern Antarctic Front near the overseas British territory of South Georgia.

British Forces South Atlantic Islands (BFSAI) used high-speed digital cameras attached to a military transport aircraft to capture rare images of the iceberg as it travelled towards the island.

The photos, which the BFSAI posted on Facebook, exposed unprecedented details, including cracks and fissures, within the main body of the iceberg. Crew members and a government officer were also able to visually identify ice debris in the surrounding waters near South Georgia and the South Sandwich Islands, located approximately 4,000 kilometres north of Antarctica.

The iceberg, which has been named A68a, is now just 200km away from the islands – raising concerns that it could become stuck in shallow waters, according to the BBC.

“905 EAW proudly dispatched our Airbus A400M to collate data in support of the ongoing efforts to understand the behaviour and potential effects of A68a,” Squadron Leader Michael Wilkinson said in a statement posted on Facebook on Friday.

“Guided by the satellite tracking, the A400M can get under the weather and closer to the iceberg, enabling more detailed observations. I know I speak on behalf of all of the crew involved when I say this is certainly a unique and unforgettable task to be involved in.’’

The BFSAI say that under normal circumstances, the iceberg would have attracted the attention of numerous cruise ship operators who travel to the Southern Ocean during the summer. However, ship traffic has steadily declined this year due to the global pandemic.

The sheer size of the iceberg made it impossible for the BFSAI to capture it in its entirety from the aircraft in one single shot, but officials say the close-up images of the iceberg and surrounding waters will be of value to observers and scientists.

Officials from the South Georgia and South Sandwich Islands government said they’re continuing to follow the progress of the iceberg, according to the BFSAI’s Facebook post. They say video footage from the mission will assist in predicting the iceberg’s future behaviour and help determine the scale of the threat to local areas.

An RAF A400M from BFSAI has conducted reconnaissance of the A68a iceberg, currently travelling through the Southern...