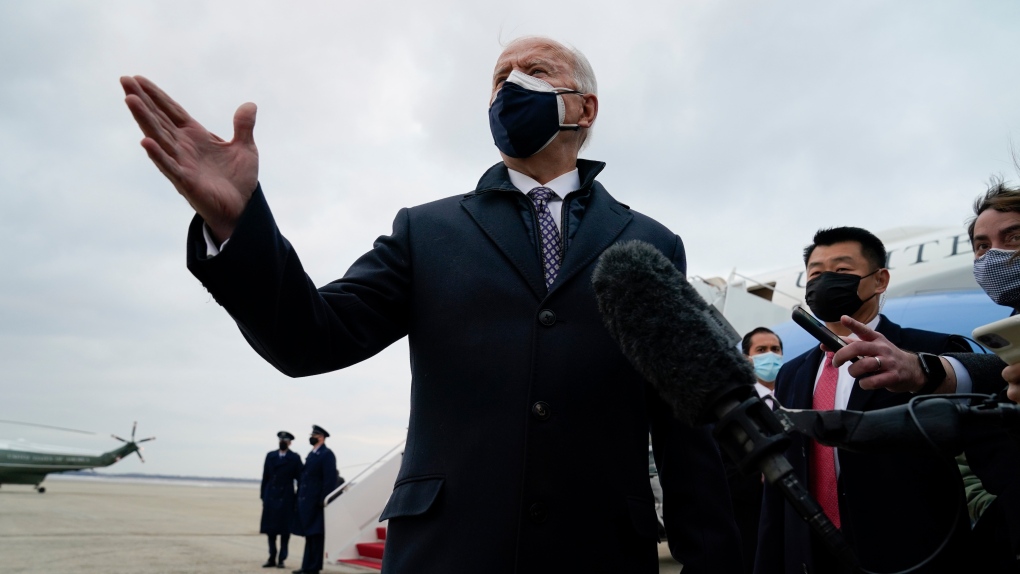 PORTLAND, MAINE -- U.S. President Joe Biden wants to change the way the U.S. uses energy by expanding renewables, but he will need to navigate a host of challenges -- including the coronavirus pandemic and restoring hundreds of thousands of lost jobs -- to get it done.

The wind and solar industries have managed to grow despite a less-than-supportive Trump administration, which favoured fossil fuels such as coal. They have a new ally in the White House in Biden, who has set a goal of 100% renewable energy in the power sector by 2035. Now comes the hard part -- making it happen.

Disruption from the pandemic has cost the renewable energy industry, which relies heavily on labour, about 450,000 jobs. The pandemic has also made it more difficult to build wind and solar infrastructure and has redirected federal resources away from the energy sector. There's the additional challenge of getting pro-environment legislation through a deeply divided U.S. Senate where Democrats hold the narrowest margin possible and have some key members in fossil fuel states.

To reach Biden's 100% renewable energy goal will require a massive buildout of grid infrastructure to get energy from the windy plains or offshore wind farms over long distances to cities where electricity is needed. About a sixth of today's U.S. electricity generation is from renewable sources, the U.S. Energy Information Administration has said.

Michael Mann, an American climatologist and geophysicist who directs the Earth System Science Center at Pennsylvania State University, said Biden "campaigned on and has a mandate to act on climate," and that boosts his prospects of getting tough changes through. However, he said, it's going to be a fight, and compromises will need to be made.

"We must recognize that Green New Deal-like legislation probably cannot pass in a divided Congress and climate advocates may need to make some concessions if we are to see climate legislation in the U.S. over the next couple years," Mann said.

Still, the industry is optimistic Biden's ambitious goal can be reached.

"It's doable, but it won't be easy," said Larry Gasteiger, executive director of WIRES, the transmission industry trade group.

It takes about a decade to get transmission lines planned, sited and built, he said, so 2035 "may sound like it's a ways off, but it's really not when you think about all of the infrastructure that's going to need to be built."

It could cost US$30 billion to $90 billion over the next decade to build the transmission infrastructure necessary to connect all the new generation resources and maintain reliability, according to WIRES.

Biden's presidency -- along with the rise of Democrats in the Senate -- is widely viewed as a potential boon to a renewables industry that's already growing, despite the Trump administration's focus on fossil fuels and the pandemic's challenges to new utility-scale operations. Last year was a record year for wind and solar power installations.

Some state-level politicians, such as Democratic Maine Gov. Janet Mills, started making moves in favour of offshore wind around the time of Biden's victory. Mills announced in November that the state is planning to help develop the first floating offshore wind research farm in U.S. history.

And the federal Bureau of Ocean Energy Management announced on Feb. 3 that it's resuming an environmental review of a proposed offshore wind project off Martha's Vineyard in Massachusetts. BOEM Director Amanda Lefton said offshore wind "has the potential to help our nation combat climate change, improve resilience through reliable power and spur economic development to create good-paying jobs."

The Biden administration is in a position to accelerate trends toward renewable energy and away from fossil fuel power, said Dave Reidmiller, a Maine-based scientist who assisted Biden's transition team in the Office of Science and Technology Policy.

"Utilities and others kind of see the writing on the wall of where this is going," Reidmiller said. "I suspect it's no surprise that the Biden administration has fairly ambitious de-carbonization goals for American society."

The U.S. has just two working offshore wind farms -- off Block Island in Rhode Island and off Virginia -- but more than two dozen others are in various stages of development. The wind power industry and clean energy advocates say the new administration can make the country an offshore wind power leader.

One way Biden could boost the offshore wind industry would be accelerating permit procedures. Jeff Berman, manager of emissions and clean energy analytics at S&P Global Platts, said that would help encourage growth "of a resource that there isn't very much of in this country."

But one of the clean energy industry's first priorities is to regrow and even expand jobs, said Matthew Davis, legislative director of the League of Conservation Voters.

Estimates of employment in the U.S. clean energy sector range from about 700,000 to 3 million jobs. Biden pledged to create 10 million jobs.

"Biden says we need millions more solar roofs, tens of thousands more wind turbines, getting offshore wind industry off the ground," Davis said. "It's doable but aggressive, and we're going to be pushing right along the administration and our allies in Congress to make this happen."

"The more you clamp down on emissions, the more that will help renewables," said the company's vice-president, Mike Lucini.

Under Biden, the industry is also banking on more certainty about tax credits, which analysts say have been major drivers of renewables growth. Tax credits for wind and solar were extended in the December stimulus bill -- with Trump's approval -- and wind and solar interests are hopeful they can rely on long-term extensions in the coming years.

In addition, the industry wants an end of tariffs that cause the U.S. to pay some of the world's highest equipment prices.

Tariffs on solar components are set to expire in 2022. While it's unclear if Biden could end those tariffs earlier, Berman of S&P Global Platts said his administration probably won't extend them -- unlike the Trump administration which was looking to increase those tariffs as recently as a few months ago.

Biden's administration raised the industry's hopes with a set of executive actions aimed at tackling climate change on Jan. 27.