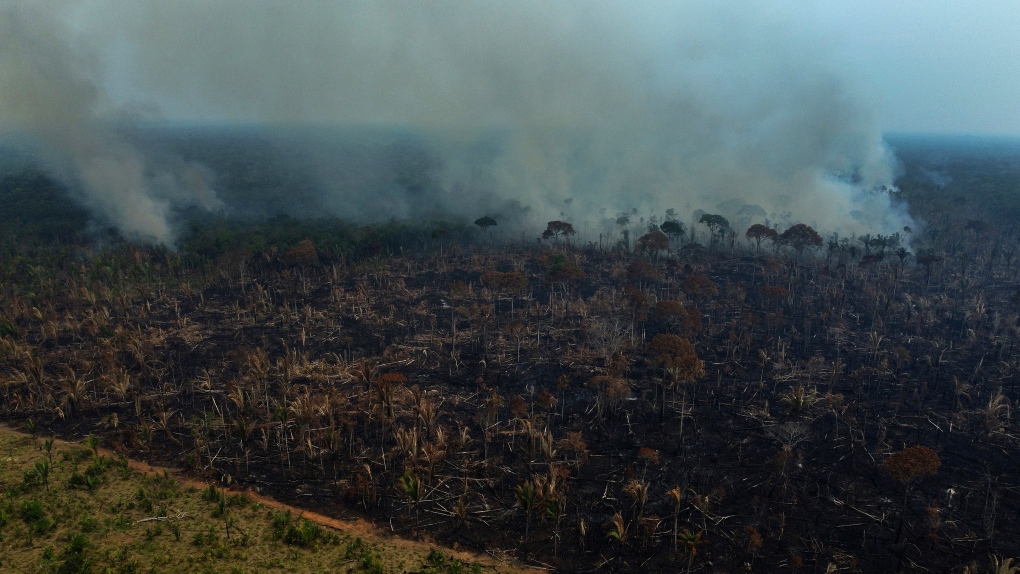 Deforestation in the Brazilian Amazon slowed slightly last year, a year after a 15-year high, according to closely watched numbers published Wednesday. The data was released by the National Institute for Space Research.

The agency's Prodes monitoring system shows the rainforest lost an area roughly the size of Qatar, some 11,600 square kilometres (4,500 square miles) in the 12 months from August 2021 to July 2022.

For more than a decade it looked as though things were getting better for the Brazilian Amazon. Deforestation had declined dramatically and never rose back above 10,000 square kilometres. That was before the presidency of far-right President Jair Bolsonaro, beginning in January 2019.

This will be the last report published under Bolsonaro, as he lost his reelection bid and will leave office Jan. 1. But part of the destruction that took place on his watch will not appear until next year, including the key months from August to October of 2022. A preview of those months comes from a different federal satellite system that issues faster but less accurate data: It shows deforestation skyrocketed 45% over the August to October period the prior year. Traditionally, that time of year sees peak destruction, due to the dry season.

An analysis of the new yearly data from Climate Observatory, a network of environmental groups, shows that in the four years of Bolsonaro's leadership, deforestation rose 60% over the previous four years. That is the largest percentage rise under a presidency since satellite monitoring began in 1998.

In one state, Para, a fierce rate of destruction went down by 21% yet it was still the centre of one-third of all Brazil's Amazon forest loss. Part of the tree cutting and burning happens in areas that are ostensibly protected. One such area is Paru State Forest, where the non-profit Amazon Institute of People and the Environment registered 2 square kilometres (0.7 square miles) of deforestation in just October.

"In recent years, deforestation has reached protected areas where previously there was almost no destruction," Jakeline Pereira, a researcher with the Amazon Institute, told The Associated Press. "In Paru's region, the destruction is driven by lease of land for soybean crops and cattle."

Another critical area is the southern part of the state of Amazonas, the only state that increased deforestation in the most recent data, by 13% compared to the year before. It's largely attributable to Bolsonaro's push to pave about 400 kilometres (250 miles) of the only road that connects Manaus, home to 2.2 million people, with Brazil's larger urban centres further south. Most Amazon deforestation occurs alongside roads where access is easier and land value is higher.

Researchers and environmentalists have blamed Bolsonaro's policies for the surge in deforestation. The administration weakened environmental agencies and backed legislative measures to loosen land protections in the name of economic development, paired with a view of occupying a sparsely-populated territory at any cost. This policy has emboldened land robbers and spurred more illegal mining.

Bolsonaro's successor, leftist former president Luiz Inacio Lula da Silva, promised cheering crowds at the recent U.N. climate conference in Egypt to end all deforestation in the whole country by 2030. "There will be no climate security if the Amazon isn't protected," he said.

The last time da Silva was president, from 2003 to 2010, deforestation fell sharply. On the other hand, he backed initiatives that set in motion destruction in the long run, such as the construction of the mammoth Belo Monte hydroelectric dam and generous loans to the beef industry. Chopping down forest for pasture is the primary driver of deforestation.

The Amazon rainforest, which covers an area twice the size of India, acts as a buffer against climate change by absorbing large amounts of carbon dioxide. It's also the most biodiverse forest in the world, and the home of tribes that have lived in the forest for thousands of years, some of them living in isolation.

"If da Silva wants to decrease forest destruction by 2023, he must have zero tolerance for environmental crime from Day One of his administration. That includes holding accountable those who sabotaged environmental governance in the country while in office over the past four years," says Marcio Astrini, executive secretary of the Climate Observatory.

An Alberta First Nation is to sign an agreement today with Ottawa giving it the autonomy to administer its child welfare.

Health Canada is encouraging Canadians to check their cupboards and kitchen tables as the agency has recalled more than 30 types of Indigo-branded items including ceramic mugs, mug ornaments and houseware products due to potential mould contamination.

Authorities in Western Australia on Wednesday recovered a tiny but dangerous radioactive capsule that fell off a truck while being transported along a 1,400-kilometre Outback highway last month in what an official said was like finding the needle in the haystack.

Fear of disappointment? This is why you should say 'no' more

Many people have a hard time saying 'no,' a psychologist says, but the reluctance to let others down has widespread mental health impacts.

'We're all Tyre': Family prepares to lay Nichols to rest

The family of Tyre Nichols plans to lay him to rest on Wednesday, three weeks after he died following a brutal beating by Memphis police after a traffic stop.

Andrew Tate lost his appeal at a Romanian court and will be held for a further 30 days, an official said Wednesday.