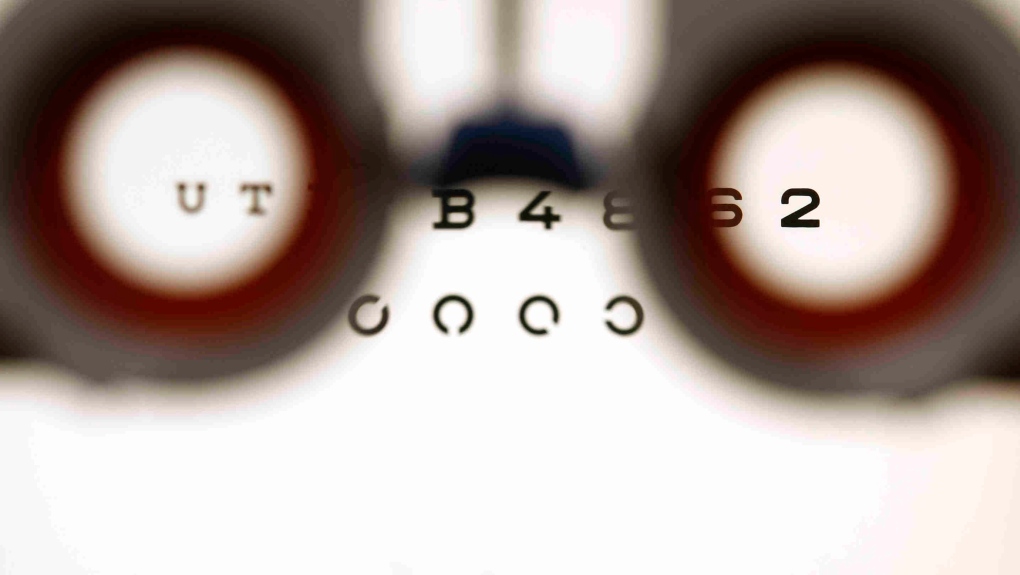 An optometrist holds glasses in front a lightbox during an eyesight test in Bremen, Germany, on Friday, Jan. 16, 2009. THE CANADIAN PRESS/AP/Joerg Sarbach

Increases in air pollution are linked to an increased risk of irreversible sight loss, according to a new study.

Researchers from University College London (UCL) found that even low exposure to air pollution across England, Scotland and Wales appears to impact the risk of age-related macular degeneration (AMD).

AMD is the leading cause of irreversible blindness among people over 50 in high-income countries. AMD is linked to the loss of central vision -- needed for reading, performing fine detailed tasks and recognizing faces -- and the biggest risk factors for the disease are genetics, old age and smoking.

Researchers found that people living in the most polluted areas were at least 8% more likely to report having the condition, in a study published Monday in the British Journal of Ophthalmology.

The team studied data from 115,954 people aged between 40-69, who had participated in the U.K. Biobank, a large study of half a million people focusing on the medical diagnoses and biological measurements of participants.

Using eye measurements and data from questionnaires, experts studied those who said they did and did not have macular degeneration, and then compared the results to the amount of pollutants estimated to be at their residential addresses.

"People who live in a more polluted area report macular degeneration more frequently," Paul Foster, a professor of glaucoma studies and ophthalmic epidemiology at UCL and senior author of the paper, told CNN.

PM2.5 is tiny particulate pollution that can move deep into the lungs when inhaled and enter the bloodstream. The particles, made up of dust, dirt, soot or smoke, originate from construction sites, unpaved roads, fields, smokestacks or fires, and can contain different chemicals. But most particles are a mix of pollutants from power plants, industrial and vehicle emissions.

Foster told CNN that the pollutants enter the body through the lungs, and seem to cause particular damage to the eyes because of high blood flow in the eye wall.

"It's people breathing the stuff in, and it going down into the lungs, being absorbed into the blood, carried round in the blood," he said.

"There's definitely a relationship between the more disadvantaged members of society and higher risk of getting this condition," he added.

WHO data shows that nine out of 10 people breathe air that exceeds guideline limits on high levels of pollutants.

Chris Inglehearn, a professor of molecular ophthalmology at the University of Leeds said that the UCL research is similar to a 2019 study from Taiwan. "Both show a link between air pollution and age-related macular degeneration, a common cause of blindness in older people," he told the Science Media Centre.

"The profile of pollutants the two groups looked at is slightly different but the source is the same, combustion. Of course, correlation does not prove causation, but the fact that these two independent studies reach similar conclusions gives greater confidence that the link they make is real," Inglehearn, who was not involved in the UCL study, said.