Ability of coral reefs to benefit humans has halved since 1950s, study finds 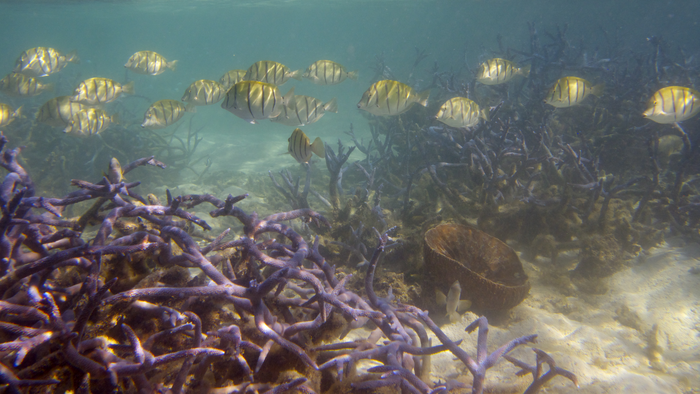 TORONTO -- Climate change, overfishing and pollution are threatening coral reefs worldwide, according to researchers, and their capacity to provide essential benefits and services to humans has drastically decreased.

A study published Friday in the journal One Earth offered a comprehensive look at the impact diminishing coral reef coverage has had on ecosystem services, that is, the ability of reefs to provide food and livelihoods to humans.

Global coverage of living coral has been halved since the 1950s, according to the study, and has come with a proportional decline in fish catches and abundance, as well as biodiversity.

"Coral reefs are known to be important habitats for biodiversity and are particularly sensitive to climate change, as marine heat waves can cause bleaching events," Tyler Eddy, research scientist at the Fisheries and Marine Institute, Memorial University of Newfoundland, said in a news release. "Coral reefs provide important ecosystem services to humans, through fisheries, economic opportunities and protection from storms."

Coral bleaching occurs when sources of stress, including changes in temperature, cause coral to expel the algae living in its tissue, which turns it white. Bleached coral is still alive, but much more vulnerable to disease and starvation.

In addition to providing a habitat for fish, coral reefs also act as a natural barrier protecting shorelines from waves and storms.

Eddy and his colleagues analyzed living coral cover across the globe against coral-associated fish catches, fish abundance, biodiversity and consumption of fishes by coastal Indigenous groups.

They found that the volume of fish caught peaked in 2002 and has been in decline since despite increased fishing efforts. The catch-per-unit effort, a metric that indicates abundance, has decreased by 60 per cent since 1950.

The team of researchers also calculated a 63 per cent decline in biodiversity with the loss of coral.

"Our analysis indicates that the capacity of coral reefs to provide ecosystem services has declined by about half globally," William Cheung of the University of British Columbia's Institute for the Oceans and Fisheries said. "This study speaks to the importance of how we manage coral reefs not only at regional scales, but also at the global scale, and the livelihoods of communities that rely on them."

The authors of the study note that achieving climate change emissions targets and reducing local impacts can help reduce stress on reefs and allow them to continue providing ecosystem services.

Maintaining these services is essential for coastal Indigenous peoples, the authors wrote, as their consumption of seafood is 15 times that of non-Indigenous populations, and therefore they rely on these habitats heavily for nutrition.

"Coral reef biodiversity and fisheries take on added importance for Indigenous communities, small island developing states and coastal populations where they may be essential to traditions and cultural practices," the authors wrote. "The reduced capacity of coral reefs to provide ecosystem services undermines the well-being of millions of people with historical and continuing relationships with coral reef ecosystems."