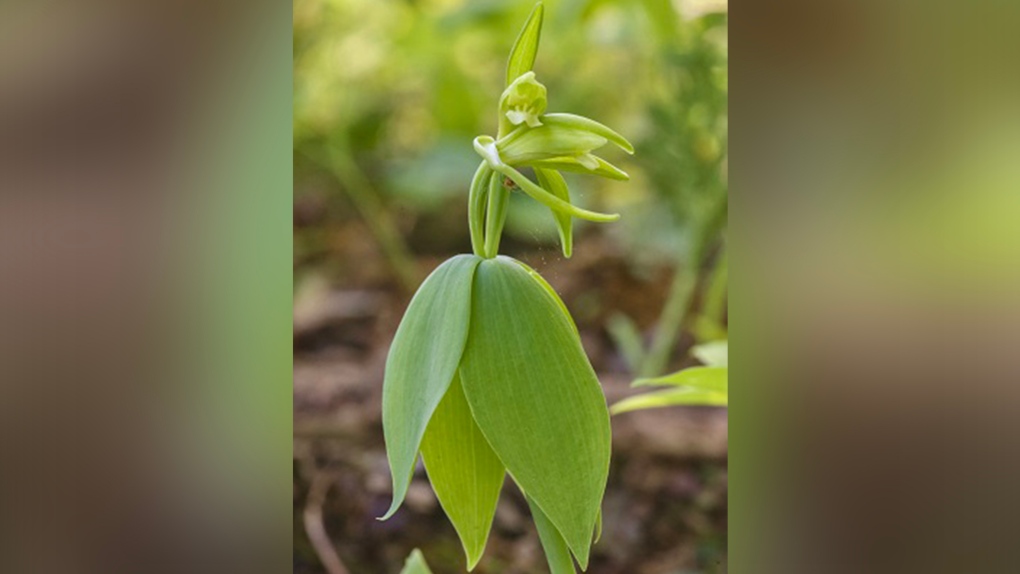 The small whorled pogonia, thought to be extinct in Vermont for 120 years, was rediscovered by an amateur naturalist. (Vermont Fish & Wildlife Department)

The small whorled pogonia, a federally threatened species of orchid, has been rediscovered in Vermont -- 120 years after the plant was last spotted in the state.

The plant was last documented in Vermont in 1902, Aaron Marcus, an assistant botanist at Vermont Fish and Wildlife Department, told CNN. Naturalists had searched extensively for the small whorled pogonia in Vermont but come up empty-handed.

The small whorled pogonia is "one of the rarest orchid species east of the Mississippi," said Marcus. The rarity of the species may have to do with its dependence on fungi in the environment, a relationship that is still little understood by scientists.

"One thing that's really cool about our orchid species is that most of them are really, really dependent on fungal species, species we can't see underground, connected to our root system, which makes it so hard for us to understand orchids and what they need," Marcus.

The last known documentation of a small whorled pogonia in Vermont was a photograph of a plant that had been dug up and placed in a flower pot, Marcus said.

The discovery of an outcropping of the plant in Vermont is "a really great and exciting bright light," said Marcus. The population is "perhaps the most northerly population in the whole range of small whorled pogonia," which are found in southern Maine south to Georgia and west to southern Ontario, Michigan, and Tennessee.

The orchids are threatened by climate change, habitat loss, and collection or trampling by humans.

Marcus explained that the population of small whorled pogonias in Vermont was discovered by a retired greenhouse manager who posted pictures of the orchid to iNaturalist, an online platform for amateur naturalists to identify plants and animals around them. Then Marcus and Vermont Fish and Wildlife Department Botanist Bob Popp visited the site and confirmed it was indeed a small whorled pogonia on May 25. The department made the discovery public in a news release published on June 8th.

"It was very exciting" to discover the orchid, said Marcus.

The "most important thing is to protect the plants where they are," Marcus added. "That's really our first priority, for them to be able to thrive in place." The plants are located on publicly protected lands in Winooski Valley Park District, and the department is keeping their exact location a secret to ward off would-be collectors.

For Marcus, the discovery is an "incredible and humbling" reminder of how much scientists have left to learn about the natural world. "There's more to find out there," Marcus said. "There's so much right in our backyards that we just don't know, or that we once knew and we need to relearn."

"Things like that don't happen that often," Popp told CNN. "I've been in my position for 32 years, and more often than not I'm documenting the decline of species," he said. "Things going the other direction -- it's just phenomenal."

Going forward, Popp said his team members hope to monitor the population. They found evidence of damage from slugs on some of the plants, and the orchids may also face threats from browsing by animals like deer.

Popp also emphasized the importance of naturalists "reporting what they see" in the outdoors. "There's no substitute for eyes and ears in the woods," he said.

Power is slowing coming back to Toronto's downtown core after a widespread outage caused major disruptions in the city Thursday afternoon.

A new virus was found in China, here's what we know

Scientists are keeping an eye on the Langya virus, a new pathogen that appears to have been transmitted from animals to humans in China and causes symptoms similar to COVID-19 or the flu.

An armed man clad in body armour who tried to breach the FBI's Cincinnati office on Thursday was shot and killed by police after he fled the scene and engaged in an hours-long standoff in a rural part of the state, the Ohio State Highway Patrol said.

Will you be eligible for one of Ontario's new tax credits? Here's the breakdown

The Ontario government is planning to move forward with several tax credits for residents as it formally tabled its 2022-23 budget on Tuesday.

It’s been seven days since 74-year-old Lois Chartrand went missing while mushroom picking in the forest north of Smeaton, Sask.