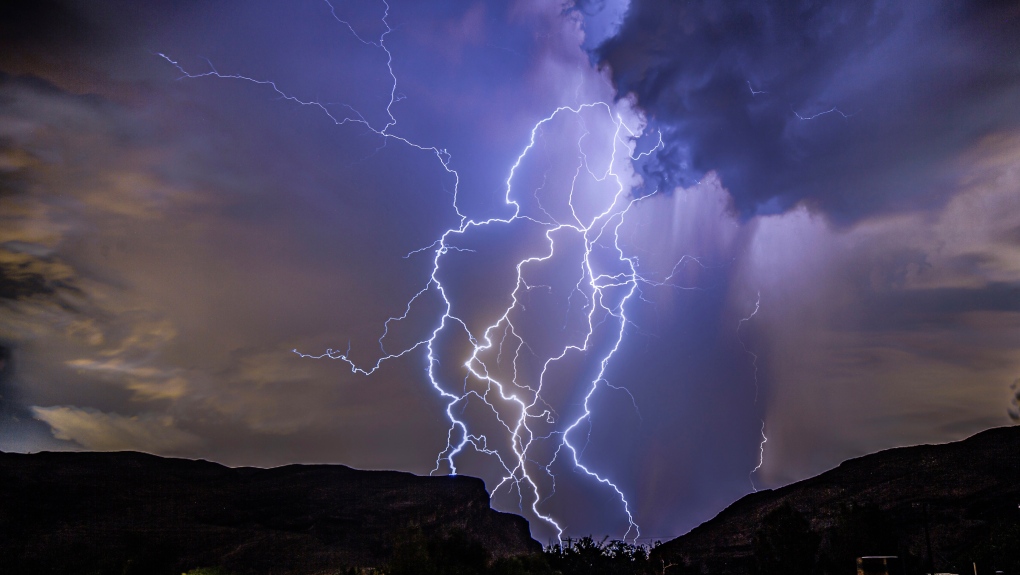 In this photo provided by Dakota Snider, a thunderstorm is seen from Highway 159 over Las Vegas on Thursday, Aug. 11, 2022. (Dakota Snider via AP)
LAS VEGAS -

The most "restless" summer monsoon season in a decade became deadly Thursday, as intense lightning and thunderstorms flooded parts of southern Nevada and a leaky ceiling forced table games to stop at one Las Vegas Strip casino.

A man's body was found Friday by public works crews and firefighters removing debris from a flood channel near the Las Vegas Boulevard resort area where a person died about midnight despite being pulled by firefighters from floodwaters, Deputy Clark County Fire Chief Billy Samuels said. The Clark County coroner did not immediately report the identities or causes of death in either case.

Water also flowed through a parking structure flood channel near The Linq hotel and High Roller observation wheel, and social media posts showed water leaking from the ceiling onto gambling tables at the Planet Hollywood resort.

No other injuries were reported. Officials with Caesars Entertainment Inc., owner of both properties, did not immediately respond to messages about damage.

The overnight storm was similar to another that swept through Las Vegas two weeks earlier, late July 28.

Friday dawned to clear skies, but the National Weather Service reported thunderstorms by afternoon north and east of the Las Vegas Valley. It said heavy downpours, frequent lightning and gusty winds would be possible with any storms

A flash flood watch was in effect through the day for southern Nevada and neighbouring counties: Mohave in northwest Arizona and San Bernardino in California.

Meteorologist Brian Planz said about 1.25 inches (3.2 centimetres) of rain fell overnight in some areas west of the Las Vegas Strip and near the city of Kingman in northwest Arizona.

Social media video showed water above hubcaps of cars in some Las Vegas intersections and washing into the doorway stairs of a bus plowing through flooding.

Winds were not a widespread factor late Thursday, but the weather service recorded a gust of 64 m.p.h. (103 kph) at North Las Vegas Airport. No damage was reported.

Planz said 0.58 inch (1.47 centimetres) of rain was recorded at the official measuring spot at Harry Reid International Airport, bringing the total to 1.28 inches (3.25 centimetres) during the June 15 to Sept. 30 monsoon season.

"That makes this the wettest monsoon season in ten years," the weather service said over a Tweet chart labelled "Restless 2022 Monsoon." It tallied 3.63 inches (9.2 centimetres) of summer rain in the region in 2012, but only a trace in 2020.

The Las Vegas area usually receives about 4.2 inches (10.7 centimetres) of rain per year.

Planz said forecasts call for more storms through next week, fuelled by warm air and moisture drawn north from the Gulf of California.

"There's really no sign of the monsoon letting up any time soon, so we're going to continue to see the chance of scattered showers and thunderstorms each afternoon and evening," Planz said.

Towns in Cape Breton and on Newfoundland's southern coast declared states of emergency on Saturday as post-tropical storm Fiona -- one of the strongest storms to ever strike Eastern Canada -- continued to lash the region.