Chronology of events in the Shafia murders 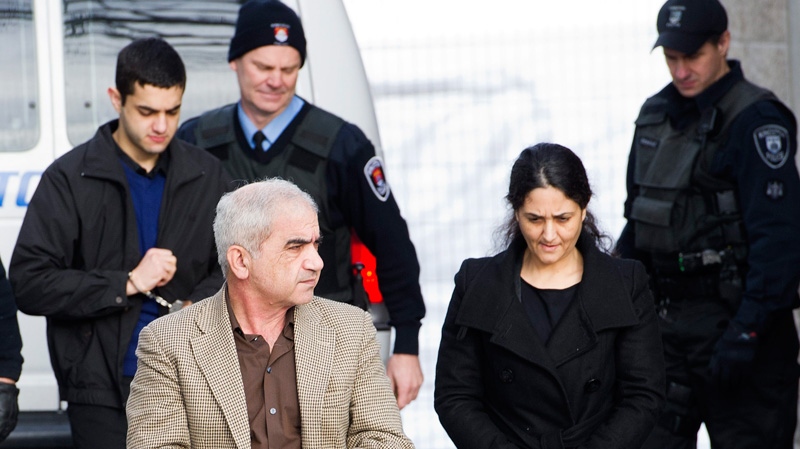 KINGSTON, Ont. - A jury has found three members of an Afghanistan-born Montreal family guilty of four counts each of first-degree murder.

Mohammad Shafia, 58, Tooba Yahya, 42, and their son Hamed, 21, are convicted of killing three of Shafia and Yahya's daughters and Shafia's first wife in a polygamous marriage over family honour.

A chronology of major events before and after the deaths:

1992: The Kabul-born Shafia family leaves Afghanistan and lives in Pakistan, Dubai and Australia before moving to Montreal in 2007.

November 2007: Rona arrives in Canada on a visa on the basis that she is Shafia's cousin.

April 2008: Rona starts a diary, writing about alleged mistreatment by Shafia and Yahya. Shafia beat her and Yahya threatened to kick her out of the house, calling her a servant, Rona wrote.

April 17, 2009: Zainab, 19, the eldest Shafia daughter, runs away to a shelter, leaving a note saying she wants to live her own life.

April 17, 2009: Other Shafia children call 911 saying they are fearful of their father's reaction to Zainab running away.

May 1, 2009: Zainab returns home only after her father leaves for Dubai on business and after her mother promised she could marry her boyfriend.

May 18, 2009: Zainab marries her boyfriend but her family convinces her to annul it after only a few hours.

June 20, 2009: Someone uses the family computer to search "where to commit a murder."

June 22, 2009: Shafia buys a used Nissan, the one that would be found at the bottom of a canal days later.

June 24, 2009: The Shafia family stops at the locks at Kingston Mills to use the washroom en route to Niagara Falls.

June 30, 2009, about 2 a.m.: Shafia and Hamed check into two rooms at the Kingston East motel, near Kingston Mills. Ten people were on the family vacation, but Shafia and Hamed take two rooms for a total of six people. The motel manager sees Shafia and Hamed then leave in an SUV, and he does not see anyone return for the approximate half an hour he remained awake.

June 30, 2009, 7:55 a.m.: Hamed calls police in Montreal to report he had an accident with a barrier in a near-empty parking lot. The Crown alleges this was done to mask damage the Lexus SUV sustained at the locks hours earlier when the Nissan was pushed into the water.

July 18, 2009: Kingston police install intercepts in the family's minivan, home and on Hamed's cellphone, catching Shafia uttering curses against his daughters, calling them "treacherous" and "whores."

Nov. 7, 2009: Hamed tells new version of events to a private investigator of sorts.

Nov. 3, 2011: Trial is delayed for several days after Shafia is taken to hospital for an unspecified medical emergency.

Jan. 26, 2012: Courthouse is evacuated for several hours due to bomb threat.

Jan. 29, 2012: After 15 hours of deliberations over two days, the jury returns a guilty verdict for all three accused on four counts of first-degree murder.

Jan. 29, 2012: All three declare their innoncence when invited by the judge to speak to the court.

Jan. 29, 2012: Judge Robert Maranger calls the murders "despicable," "heinous" and "cold-blooded," and condemns the family's "completely twisted concept of honour...that has absolutely no place in any civilized society."