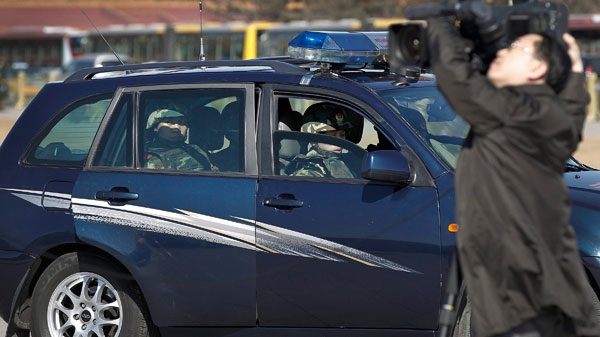 Chinese police have told foreign media not to turn up at spots that have been anonymously designated for weekly protests, threatening them with loss of their work permits and with other punishments if they don't comply, journalists said Thursday.

Security crews have been closely watching journalists near sites in Beijing, Shanghai and other Chinese cities, where anonymous Internet postings have been calling for residents to gather in peaceful protest.

Onlookers, media and heavy security gathered at proposed protest sites on Sunday, although no demonstrations have appeared since the posting began appearing online three weeks ago.

Police swarmed a shopping mall and disrupted cell phone service in Beijing's university area on Sunday out of apparent fears a demonstration may occur. Heavy security forces were also spotted at several shopping areas that had been designated protest sites.

During a press conference Sunday, Beijing officials denounced the Internet messages as an attempt to undermine the country's stability.

Forcing journalists to seek permission before reporting marks an apparent end to relaxed regulations that first appeared for the 2008 Beijing Olympics and were then made permanent.

Concern over a potential uprising led the Chinese government to promise an increase in social spending earlier on the weekend.

On Saturday, Premier Wen Jiabao announced that the government would boost spending by 12.5 per cent by investing in education, job creation, low-income housing, health care and pensions.

The promises appeared to be aimed as satiating the poorer members of the communist state as whispers spread of a potential peaceful uprising against the ruling class.

The plan for increased social spending comes amid the threat of social unrest, with recent anonymous online messages calling for peaceful weekly rallies similar to those that have toppled autocrats in Tunisia and Egypt.

A recent jump in consumer prices has caused serious strain on China's poorer citizens. The cost of everyday items rose nearly five per cent in January alone, while food spiked by more than 10 per cent.