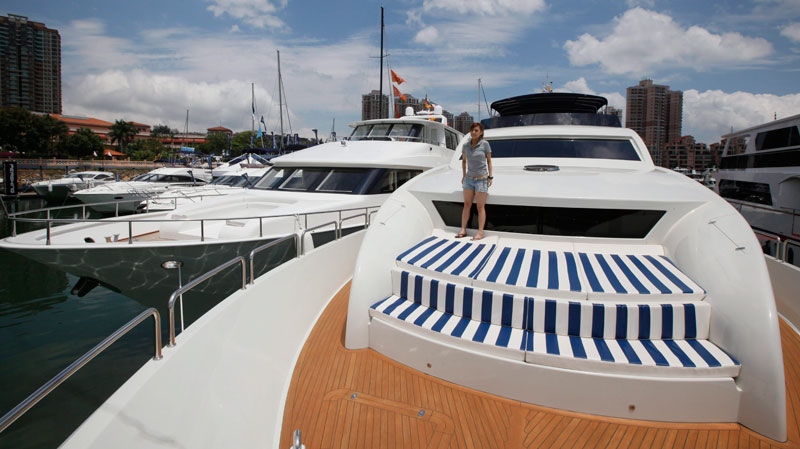 Onboard, a disco ball, karaoke system and garish neon blue accent lighting in the living quarters are hints that the vessel is aimed at the luxury yacht industry's newest growth market: wealthy Chinese.

Yacht makers are hoping they will be the latest to benefit from China's booming economy, which is creating a growing class of wealthy tycoons splurging on luxury lifestyle pursuits. Rich Chinese are already known for spending lavish sums of money on flashy apartments, designer labels such as Louis Vuitton and high-end cars such as Porsches and Rolls-Royces.

"People in China first will buy houses. Then cars. Then the next step will be the yacht industry," Wong said hopefully at a recent boat expo in Hong Kong. His family-owned shipyard located in Zhuhai, across the border from Macau in mainland China, has been building fishing and house boats for 40 years.

Two years ago, it expanded into luxury yachts under the Accelera brand, a name chosen for its vaguely European sound. That illustrates another recent trend: Chinese companies are expanding into high-end boatbuilding, a field traditionally dominated by the Americans and Europeans. But in Wong's favor are high import duties for foreign yachts, part of China's strategy to help companies in a range of industries develop into global competitors.

About 20 companies in China, including 11 backed by foreign investment, are producing superyachts, which some define as longer than 24 metres. Hong Kong-based Kingship Marine is building a 144-footer at its yard in Zhongshan in China's southern Guangdong province. The company hasn't found a buyer yet for the $27 million vessel, which is the biggest being built in China, but Managing Director Roger Liang believes there won't be any shortage of interest.

China is "just like Russia five years ago. Suddenly Russia became a very important player, so this could happen to China," he said, a reference to billionaires such as Roman Abramovich, who owns at least three yachts.

Yacht companies report that China sales started taking off two years ago, raising the possibility that some are being bought with improperly diverted stimulus money and bank lending that flooded the economy as part of government efforts to deflect the 2008 financial crisis. However, sailing experts say many are also being bought by young entrepreneurs who have made fortunes taking their companies public.

China's yachting industry is still in its infancy but local governments are hoping for rapid expansion.

The city of Tianjin is building a 9-billion yuan ($1.4 billion) yacht port that will be the country's largest, with 750 berths to accommodate luxury yachts up to 90 metrws long, according to a report in the China Daily newspaper.

Hainan Island on the southern coast, meanwhile, is being positioned as the Chinese Riviera. Qingdao, Xiamen and other ports along China's 14,500-kilometer coastline are also being developed to attract the yachting crowd.

There's no shortage of wealthy Chinese with money to blow on luxury motor yachts, a notoriously expensive pasttime. China has 875,000 millionaires and nearly half of them want to buy a boat, according to a survey last year by the Hurun Report, China's version of the Forbes Rich List.

There is plenty of room for growth, with about 1,300 private yachts in China, according to figures cited by state media. In the U.S., the world's biggest yacht market, there are 17 million privately owned recreational boats, according to industry publication International Boating Industry.

However, some sailing enthusiasts are skeptical and say China still has a long way to go before it can rival the superyacht's natural habitats of the Mediterranean or Caribbean.

One problem is murky regulations that vary from province to province. Some cities have rules governing boat ownership and how and where they can be operated, while others don't. That makes it difficult for sailors to make longer journeys.

Poor sailing infrastructure is also a problem, with relatively few experienced staff at a small number of marinas, some of which are located in the middle of industrial areas.

Meanwhile, imported boats are subject to an import duty of at least 43 per cent compared with about 15 per cent for locally made watercraft. Some yachting experts believe the Chinese government is using the tax to help develop the country's fledgling yacht building industry.

"The Chinese really want to control it, up to the point where probably their own industry has developed to a level that it can run by itself," said Bart Kimman, who runs a yacht management company based in Hong Kong.

To get around red tape, Chinese yacht owners are buying and registering boats in Hong Kong, a special administrative region of China with a separate legal system.

Albert Wu, general manager of the Gold Coast Yacht and Country Club, said an increasing number of his 220 berths are occupied by mainland Chinese-owned boats.

Frankie Chan, who traveled with his boss from Beijing to visit the show, was planning to buy five British-made Sunseeker boats.

Chan is vice president of Oursjia, which rents out luxury cars and high-end furniture to 500,000 clients in 60 cities around China. About 10 percent of them have been requesting luxury yachts.

The pair were inspecting two 60-footers that their company would take delivery of, including a sleek, black Predator model costing about 20 million Hong Kong dollars ($2.6 million). They also plan to buy three others that are at least 90 feet long, and come fitted with flat screen televisions, full size fridges and a rear "garage" hatch to stow dinghies, jetskis and other toys.

Chan and his boss plan to travel to Italy later in May to look for more boats to buy. Eventually, they want to have a fleet of 50 yachts from a range of brands based at marinas around China.

Gordon Hui, managing director of Sunseeker Asia Ltd., said that until two years ago, it had almost no sales to Chinese customers. Since then, he's sold about 25 boats to Chinese customers and the market now accounts for 8 to 10 percent of the company's annual production of about 200 yachts a year.

Chinese shipyards are hoping to compete with their foreign rivals by undercutting them on price. Wong's company sells three yachts under the Accelera brand, including a 98-footer that sells for HK$38 million ($4.9 million). Wong reckons that's a quarter of the cost of a comparable American or European model. The company equips its boats with imported generators and other equipment but benefits from lower labor costs at its shipyard in Zhuhai, just over the border from Macau.

Wong has sold some 10 vessels, including one to a company boss from China who paid his deposit of several million Hong Kong dollars in cash.

"We couldn't it count it quickly enough, so we had to go buy a cash-counting machine," he said.