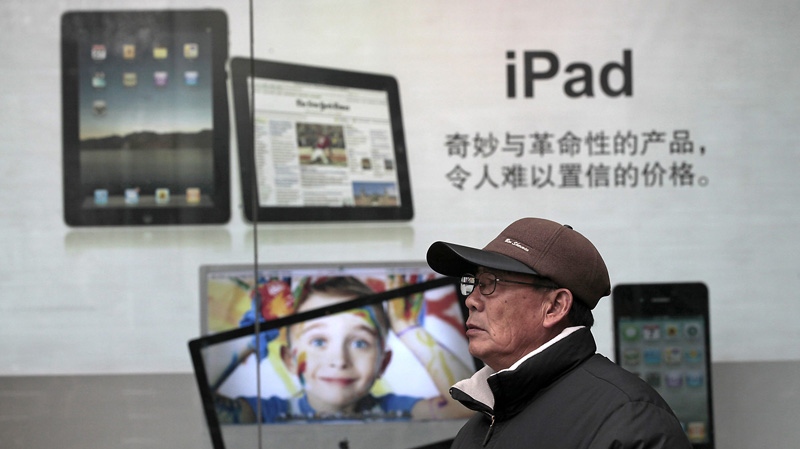 BEIJING - Chinese officials face a choice in Apple's dispute with a local company over the iPad trademark -- side with a struggling entity that a court says owns the name or with a global brand that has created thousands of jobs in China. Experts say that means Beijing's political priorities rather than the courts will settle the dispute if it escalates.

Shenzhen Proview Technology has asked regulators to seize iPads in China in a possible prelude to pressing Apple Inc. for a payout. There have been seizures in some cities but no sign of action by national-level authorities.

Proview has a strong case under Chinese trademark law, but that could quickly change if Beijing decides to intervene to avoid disrupting iPad sales or exports from factories in southern China where the popular tablet computers are made, legal experts say.

"If this becomes political -- and it's very easy to see this becoming political -- then I think Apple's chances look pretty good," said Stan Abrams, an American lawyer who teaches intellectual property law at Beijing's Central University of Finance and Economics.

The dispute centres on whether Apple acquired the iPad name in China when it bought rights in various countries from a Proview affiliate in Taiwan in 2009 for 35,000 British pounds ($55,000).

Apple insists it did. But Proview, which registered the iPad trademark in China in 2001, won a ruling from a mainland Chinese court in December that it was not bound by that sale. Apple appealed and a hearing is scheduled for Feb. 29.

"My gut reaction is that many of these activities really could be seen as pre-settlement brinksmanship," said David Wolf, a technology marketing consultant in Beijing. "Proview's motive is money, not to shut down Apple."

Chinese news reports say Proview is deeply in debt, increasing the pressure for it to demand a substantial payout from Apple. Proview International, meanwhile, has been suspended from trading on the Hong Kong stock market since August 2010 and will be removed in June if it cannot show it has sufficient assets, business operations and working capital.

In a rapid-fire series of moves, Proview has filed a trademark-violation lawsuit that goes to court Wednesday in Shanghai.

That deadline is likely to prompt Apple to agree to a settlement within a few days to avoid the uncertainty of a court fight, said Kenny Wong, an intellectual property lawyer for the firm Mayer Brown JSM in Hong Kong.

"I think Apple will be under immense pressure to have this settled as soon as possible," he said. "Obviously, it depends on the amount the Shenzhen company is asking."

An Apple spokeswoman in Beijing, Carolyn Wu, declined to comment.

Apple ran into a similar issue before it launched the iPhone in 2007.

Cisco Systems Inc., the maker of networking hardware, had owned the trademark since 2000 and used it for a line of Internet-connected desk phones. Cisco sued, the companies reached an undisclosed settlement and the phone launch went off as planned.

China is Apple's fastest-growing market and the company already has bigger sales here than any other market except the United States. In the year that ended in September, sales totalled $12.5 billion in China and Hong Kong, nearly 12 per cent of revenue.

"We've been very, very focused on China," CEO Tim Cook told investors this week at a conference in San Francisco.

The dispute comes amid complaints Beijing is failing to do enough to stamp out rampant unlicensed Chinese copying and exports of goods ranging from music and Hollywood movies to designer clothing to pharmaceuticals.

But unlike "trademark squatters" who register names of products already sold abroad and then demand foreign companies pay for the Chinese rights, Proview registered the iPad name long before Apple planned its phone.

Apple, based in Cupertino, California, insists it owns the iPad name in China and accuses Proview of failing to live up to the 2009 sales agreement.

Neither company has released that contract, which lawyers said made it impossible to know who has the stronger case.

Apple points to a Hong Kong court ruling in July that said Proview and the Taiwan company both were "clearly under the control" of the same Taiwanese businessman, Yang Long-san, and refused to take steps required to transfer the name under the agreement.

The companies acted together "with the common intention of injuring Apple," the judge said.

But that was not the final judgment in the case and might not be accepted by mainland courts, because although Hong Kong is a Chinese territory, it has a separate legal system, Wong said.

Proview says it plans to ask China's customs agency to block imports and exports of iPads.

Such requests are routine under rules enacted to help stamp out rampant Chinese product piracy that has strained relations with the United States and other trading partners.

But enforcing this one could force regulators to confront the cost of disrupting Apple's business. That might hurt China's image as a high-tech manufacturing centre at a time when foreign producers are being squeezed by rising costs.

All of Apple's iPads are made in China by Foxconn Technologies Group, which employs more than 1 million people in sprawling factory complexes. Taiwan-based Foxconn previously did all its production in China but Brazil's government says the company plans to open factories there to produce iPads and other products.

Proview has accused Apple of acting dishonestly when it bought rights to the iPad name from the Taiwan company. According to July's Hong Kong court ruling, Apple set up a company in Britain to buy the iPad trademark from owners in various markets without revealing Apple was the purchaser.

Once the dispute arose, Proview demanded $10 million for the name in China, the court document said.

Apple has other legal options in China, such as asking regulators to cancel Proview's trademark if it can be shown not to have been used for three years, said Wong. But he said that would take 12 to 18 months, extending the uncertainty for manufacturing and sales.