Charlie Sheen enters rehab; 'Two and a Half Men' on hiatus 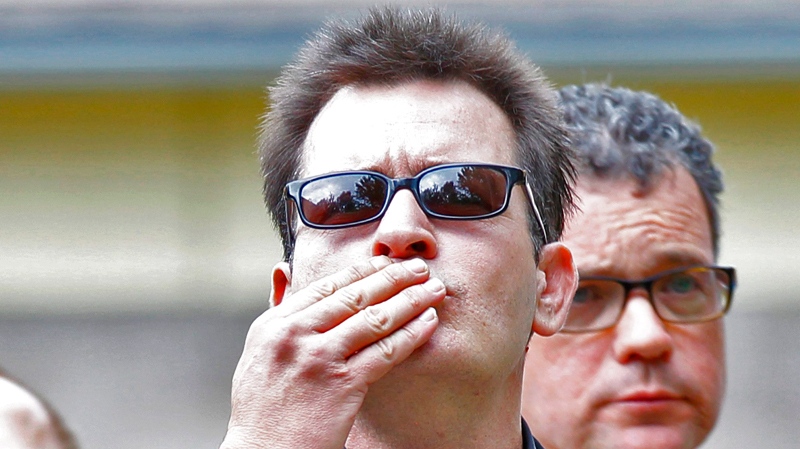 Charlie Sheen blows a kiss as he arrives at the Pitkin County Courthouse in Aspen, Colo., for a hearing in his domestic abuse case on Monday, Aug. 2, 2010. (AP / Ed Andrieski)

LOS ANGELES - Charlie Sheen was back in rehab Friday and production of his hit sitcom "Two and a Half Men" was on hold, one day after a 911 caller said the actor was intoxicated and in pain.

According to a person familiar with the emergency call placed Thursday, one of Sheen's neighbors told a 911 operator that the actor was "intoxicated" and complaining of abdominal and chest pains.

The person familiar with the call, who was not authorized to publicly discuss details, spoke Friday on condition of anonymity. Copies of the call probably won't be ready for release by the Los Angeles Fire Department until Monday, a department spokesman said.

Sheen, 45, was taken to a Los Angeles area hospital and was there until around midnight Thursday, said his publicist, Stan Rosenfield, who cited the actor's history of hernia problems.

Rosenfield said Friday that Sheen was in rehab, but he did not say why.

"Charlie Sheen has voluntarily entered an undisclosed rehabilitation center today," the spokesman said. "He is most grateful to all who have expressed their concern."

The terse statement noted that no additional information will be provided and asked that Sheen's privacy be respected.

CBS, production company Warner Bros. Television and executive producer Chuck Lorre said in a joint statement that Sheen's rehab has prompted a halt on production of "Two and a Half Men."

"We are profoundly concerned for his health and well-being, and support his decision," the companies and Lorre said.

Sixteen of the show's 24-episode order have been taped, with 14 aired so far.

Sheen's headline-making behavior has included a wild night that left a New York hotel room in shambles and sent him to a hospital, and a guilty plea last summer to assaulting his wife in Aspen, Colo. Sheen filled gossip pages again this month by spending a weekend partying in Las Vegas.

His latest hospitalization was his third in as many months. It came after a 911 call made on Sheen's behalf by neighbor Dr. Paul Nassif. The plastic and reconstructive surgeon, along with his wife Adrienne Maloof-Nassif, are in the reality show "The Real Housewives of Beverly Hills."

Earlier this month, CBS Entertainment President Nina Tassler was asked about Sheen at a news conference with TV reporters.

"We have a high level of concern. How can we not?" she said, adding the situation can't be viewed simplistically. The actor does his job on "Two and a Half Men" reliably well, she said.

When a questioner suggested a person in a different line of work would be fired for involvement in similar incidents, Tassler replied, "What do you get fired for? Going to work and doing your job?"

Sheen's Monday night program has increased its audience by 2 percent over last season, the Nielsen Co. said. He signed a new two-year contract at the end of last season that makes him one of the highest-paid actors on prime-time television.