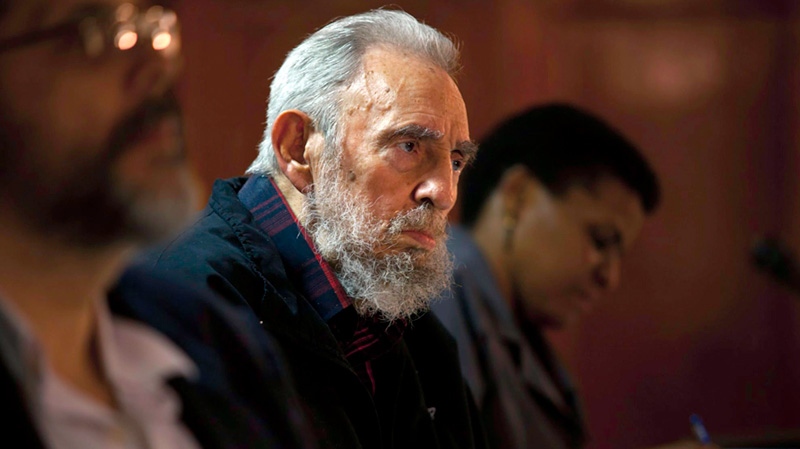 Former Cuban president Fidel Castro has launched a public critique of Canada's environmental record, in a rambling letter posted to the website of the island nation's official news agency.

According to an English translation of his piece "Reflections by Comrade Fidel: Stephen Harper's Illusions," Castro accuses Canadian mining companies of pillaging land in Latin America.

He also criticizes oilsands development for "causing an irreparable damage to the environment of that beautiful and extensive country," and alleges that U.S. officials forced Canada to "look for oil."

Overall, Castro writes that he finds Canadians to be "respectful towards our country," and points out that Canada has maintained a trade relationship with Cuba while the United States imposed an economic blockade.

He also praises former prime minister Pierre Trudeau, with whom he was friendly, as "a brilliant and courageous politician."

But he calls out the activities of "Canadian transnationals" who are engaged in mining operations in Latin America, accusing them of inflicting "incredible damage" upon millions of people as they pull gold, metals and "radioactive materials" out of the ground.

Castro quotes an article published in a Latin American journal that claims mining companies, "60 per cent of which are financed with Canadian capital, worked following the logic of maximum yield at a low cost and in a short time… ."

He points out that international mining outfits have the most success in nations that offer tax breaks and ask for few environmental and social considerations.

"According to the article, the mining laws in our countries...do not include any obligation or methodology to control environmental or social impacts; the tax revenues that mining companies pay to the countries of the region are, as an average, no more than 1.5 per cent of the revenues received," Castro writes.

He warns that the environmental and social impacts of mining operations are "mortgaging the future of Latin Americans."

He also goes on a long critique of the Organization of American States, going so far as to muse whether, because the Queen is Canada's head of state, Britain is in fact a member of the OAS. Castro wonders why "the Honorable Foreign Minister of Canada" has yet to say whether Canada supports Argentina in its ongoing dispute with Britain over the Falkland Islands, which he refers to by their Spanish name, the Malvinas Islands.

Castro wraps up letter by complaining that Cuba has been excluded from the upcoming Summit of the Americas in Colombia but that U.S. President Barack Obama is having special shirts known as guayaberas made for the event.

"The curious thing about this, dear readers, is that Cuba has been forbidden to attend that meeting, but not the guayaberas," he writes. "Who could hold back from laughing? We must hurry up and tell Harper."

The increasingly frail 85-year-old served as Cuba's prime minister and then president until handing the reins to his brother, Raul, in 2008.

While his exact health status remains unclear, he has been photographed recently with Venezuelan President Hugo Chavez, who has received cancer treatment in Cuba.