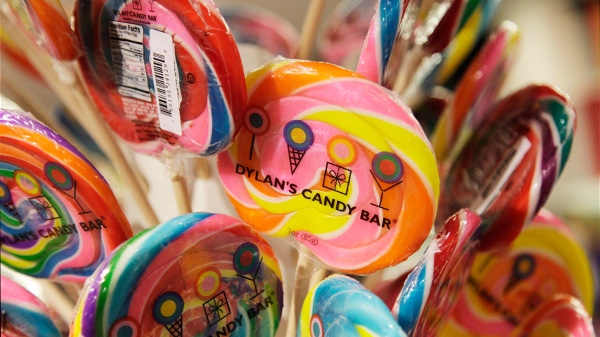 Candy retailers are living the sweet life as cash-strapped Canadians look to them for inexpensive pleasures during a time of economic uncertainty. (AP / Mark Lennihan)

Candy retailers are living the sweet life as cash-strapped Canadians look to them for inexpensive pleasures during a time of economic uncertainty.

Business is great, Jack Green a spokesperson from the Canadian chain said, adding sales at Suckers stores have increased 30 to 35 per cent over the past four years.

Fewer customers are coming in off the streets because foot traffic is down, he said, but more are setting out in search of candy stores and those consumers are buying more product.

The Old Firehall Confectionary in Markham, Ont., which opened in 2009, is also faring well. Wendy Kadlovski, director of operations, said the company has seen a steady increase in sales since its inception.

"I think everybody likes a treat and (candy) is something that does satisfy that need without customers having to spend an inordinate amount of money," she said.

During economic crunches consumers will often forgo spending on big indulgences such as vacations and expensive electronics, and opt to spend their hard-earned cash on smaller pleasures instead, explained David Soberman, a marketing professor at the University of Toronto's Rotman School of Management. As a result, products, such as alcohol, movie tickets and candy tend to sell well.

There is also an entertainment component that comes with candy, Bart Hruda, a business development manager at the Sugar Mountain Confectionary Co. in Ottawa, told CTV News Channel. Old favourites such as Cracker Jacks, Pop Rocks and Tootsie Rolls bring back childhood memories for adults while today's kids really enjoy treats such as the Harry Potter jellybeans, he said.

"There are all kinds of crazy flavours. The grosser the flavour the better, the kids love them, earwax, dirt, booger, earthworm," he said of the Harry Potter treats. "They're a blast."

The confectionary industry's high profit margins, usually more than 50 per cent, also account for its resiliency during tough times, Soberman said. For instance, when he worked in the marketing department at Nabisco, now owned by Kraft, a roll of Lifesavers cost 10 cents to make but sold for a dollar.

A high profit margin means the company has more to spend on marketing and it also allows companies to reduce prices if need be.

"Margins are high even when selling products at mark down," Soberman explains.