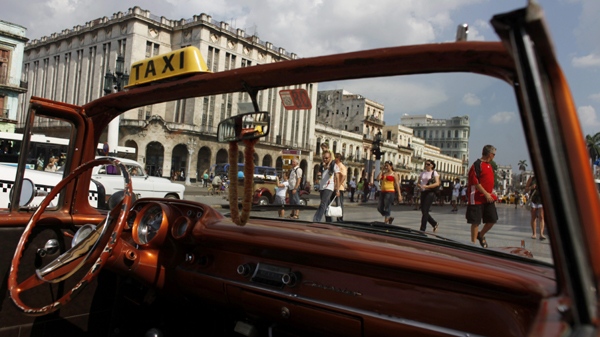 People make their way in front of the National Capitol building in Havana, Tuesday, May 4, 2010. (AP Photo/Javier Galeano)

HAVANA, Cuba - Canadians and other foreigners travelling to Cuba now need to hold travel insurance approved by island authorities before they can enjoy their time in the sun.

Those without coverage will have to buy a local policy that can cost up to $3 a day. The new law took effect Saturday and requires travellers who can't show they have authorized insurance to buy a policy from state-run Cubatur before being allowed into the country.

The measure was made law in February, but there had been no mention of how it would be implemented.

Like Cuba, all of these countries provide their citizens with health care financed totally by taxes, and often reimburse the cost of care during overseas travel.

The department's travel advisory says Canadians' "provincial plan may cover only part of the costs and will not pay the bill upfront, as required."

"We're not anticipating a big backlash, largely because we would always recommend someone get traveller's insurance anyway," Allison Wallace, communications manager for Flight Centre Canada said on Monday.

"(Travellers) can get it in their country of origin and if they don't get it before they leave, they have to get it at their point of entry."

Wallace said insurance for a one-week stay in Cuba would generally range from $40 to $100 depending on the package traveller invests in.

"The fact that it's actually required sends a little flag up in a client's brain who normally wouldn't buy (insurance)," she said. "But it's really a minimal requirement."

Wallace added that trips to Cuba are still value for money, despite the added insurance requirement.

She said travel agents will have a better idea of how travellers are reacting to the new rule come the fall, when peak season for travel to Cuba approaches.

State-run insurance provider Cubatur said kiosks selling health insurance have been established in international airports across Cuba. They accept U.S. or Canadian dollars, euros, British pounds and Swiss francs - though all prices are set in Cuban convertible pesos, pegged at US$1.08.

Travellers 70 years or older or those planning to engage in high-risk activities will have to pay an unspecified additional premium.

Cuba has said it will accept state or private insurance from any country except the United States, given Washington's 48-year trade embargo.

Cubatur said all foreigners - except diplomats and those who live here while working for overseas companies - would be required to show proof of insurance.