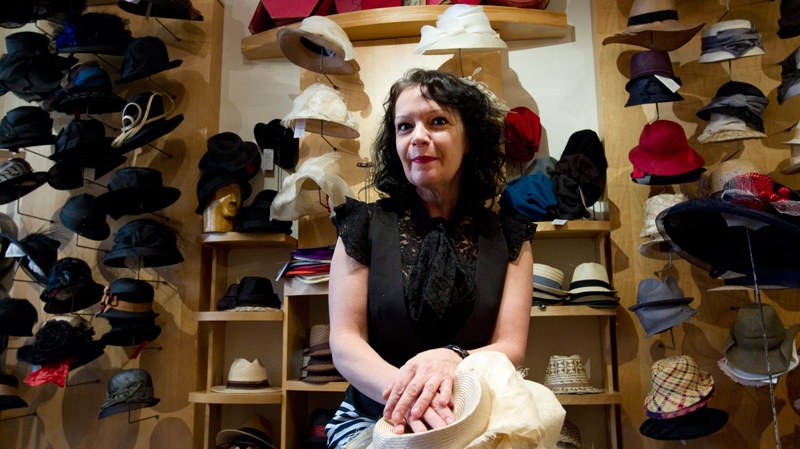 Karyn Gingras, owner and designer of Toronto millinery Lilliput Hats, is surrounded by some of her creations in Toronto on Friday March 11, 2011.(Frank Gunn / THE CANADIAN PRESS)

What will you be doing when Prince William marries Kate Middleton on April 29? Plan a "faux wedding" in your yard with your vast collection of garden gnomes? Renew your wedding vows? Maybe get out of town to avoid the royal commotion?

Whatever your choice, this historic event is inspiring people to celebrate – or not -- in their own way.

For Karyn Gingras, the owner and designer of Lilliput Hats in Toronto, Will's and Kate's wedding will be celebrated with tea and cupcakes.

"I'll likely get up early and watch, and for the shop I'll have Prosecco, cupcakes and tea for anyone who drops by," Gingras told CTV.ca.

"The best part is that my cat, Spalding Gray, will be wearing his bow tie. He usually only wears that when Rachel McAdams visits."

Even grander plans are in the works in Sydney, B.C., where Kenny Podmore, a councillor and the city's official town crier, has orchestrated a royal wedding breakfast for citizens on April 29.

"I don't think there's a ladies' hat left in any of the vintage shops. That's how gung-ho everyone is to dress up for it," said Podmore.

Local couples will also renew their wedding vows after this royal breakfast.

"We have a population of 12,000 people here and many of our citizens are loyalists," said Podmore.

"They have a special feeling for Prince William. Personally, I can't wait to raise my glass in a toast and read the proclamation of congratulations to the happy couple," he said.

"There are few royals left that we feel we can touch. I think people feel that way about Prince William," said Heather McGillivray, the director of Sales and Marketing for Tourism Victoria in British Columbia.

McGillivray and some 250 guests at the Empress Hotel will attend a 3 a.m. "Rise and Shine" breakfast and watch the wedding unfold on big-screen TVs.

"I will be in my pajamas. I won't be the only one," said McGillivray.

A grand tea will follow on the hotel's front lawns, presided over by a "Queen Elizabeth II" impersonator.

The Empress will also recreate the menu served to England's King George VI during a visit to the hotel in 1939. It will be served in a lavish dinner on April 29, April 30 and May 1 on the Queen's own china. That privilege has never been enjoyed by Canadians before.

"People love a fairy tale. That's this appeal in this wedding," said McGillvray.

"It's pretty impressive to say I watched the royal wedding inside a castle. That's what we're aiming for," said Deneen Perrin, the director of public relations for the Fairmont Chateau Laurier.

Perrin's own excitement about this event is rooted in her memories of Princess Diana's wedding.

"I was in my room at home watching with my parents. Now I'll be amongst a whole bunch of people watching this new royal wedding. That brings a new dimension to the experience," said Perrin.

Building new memories like these appeals to the staffers at the head offices of Prostate Cancer Canada in Toronto.

"We're going have a great English tea in our boardroom, with goodies from a proper English bakery," said Catherine Patterson, the organizations marketing and communications manager.

Patterson and her colleagues have discussed Middleton's dress, her flowers and her honeymoon. It just made sense to get together over tea and scones and have some fun.

"It'll be a historic day, for sure. Watching it this way will be great for moral," said Patterson.

Matthew Rowe, a member of the Ottawa chapter of the Monarchist League of Canada, will dress for the occasion.

"I'm going to dress that day as if I were invited to the wedding," said Rowe. "I'll be wearing my Monarchist League tie and decorations that day. It's a state occasion. You have to bring out all your ribbons and medals."

Rowe will offer play-by-play of wedding broadcast at the Chateau Laurier. But other League chapters will be in on the action.

At Toronto's King Edward Hotel, the Monarchist League will celebrate with a special royal wedding viewing and breakfast. The chapter will also offer a "Drop by Before Work" Wedding Breakfast and other local events held in members' homes.

"We have members in every province and every territory. They all feel very strongly about the monarchy," said Eugene Berezovsky, the media spokesman for the Monarchist League of Canada.

A group of League members will even fly to London just to be on the royal parade route.

"No one does pomp like the British," said Berezovski.

"To be there and see history being made is just too good to pass up. Will and Kate are the future for the monarchy. The world should wish them well and be happy for them on their big day."