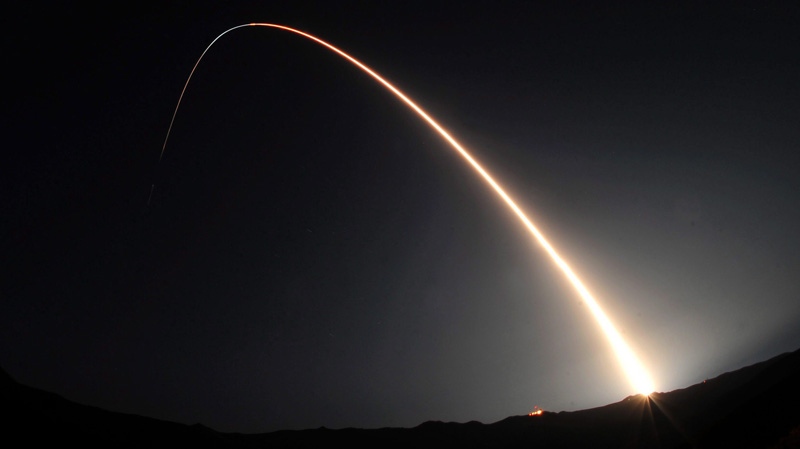 In this Saturday, Sept. 25, 2010 photo released by the U.S. Air Force, a Minotaur 4 rocket carrying the Space Based Space Surveillance satellite blasts off at 9:41 p.m., at Vandenberg Air Force Base, Calif. The satellite is designed to detect and monitor debris, satellites and other space objects that could be a threat to national security, communications and weather satellites. (CP/AP Photo/U.S. Air Force, Andrew Lee)

MONTREAL - Michel Doyon's lack of sleep as of late has nothing to do with the usual reasons.

The threats come from pieces of space junk that on average are about the size of a softball.

"I'm on call 24-7 for our space assets," the manager of flight operations at the Canadian Space Agency told The Canadian Press.

Doyon's job as a space-debris expert means he must be available around the clock to ensure Canadian resources are not damaged by wayward junk.

"I live with space debris every day," he said. "We receive notice of space debris going close to our assets regularly."

The alerts come from a space operations centre in the United States that closely monitors fragments from old rocket launchers and decaying satellites.

"Right now, there are approximately 20,000 objects going around the Earth at different altitudes," Doyon said.

But he's keeping his eyes on an area hundreds of kilometres above the Earth where Canadian satellites are in orbit.

The two RADARSAT satellites, which cost more than $1 billion to build, provide information about ice-jammed waters to shipping companies and the Department of National Defence.

SCISAT is an Earth observation satellite that monitors the stratosphere, where the ozone layer is located.

"The altitude that our assets are flying is between 650 kilometres and 800 kilometres," Doyon said.

"The 800-kilometre area is the most crowded and we have received 30 alerts since the beginning of the fiscal year, last April 1."

So far, there have been 13 alerts involving close approaches to RADARSAT-1 which required two manoeuvres.

And SCISAT has had three warnings.

Doyon says during there was only one alert in the first 10 years after RADARSAT-1 was launched in November 1995.

Doyon blames two incidents in the past few years for increasing the number of warnings he has had to deal with.

In January 2007, the Chinese tested their anti-satellite system by blowing up an old weather satellite.

"Just those two events generated approximately 2,000 to 3,000 pieces of debris each," Doyon said.

"So, out of a population of roughly 20,000 objects which measure more than 10 centimetres, those two events created one quarter of the space debris."

Kevin Shortt, president of the Canadian Space Society, says several options are mentioned when it comes to cleaning up the wreckage that litters space.

But he adds there's a lot of controversy over the proposed methods because some involve using lasers to disintegrate space junk.

The use of lasers raises fears of the weaponization of space, he said, adding they could be used for "clandestine missions, not just cleaning up debris."

Shortt likes the approach being developed by Macdonald, Dettwiler and Associates (MDA), maker of the iconic Canadarm.

The company, which is based in Richmond, B.C., has been working on plans to service satellites while they are in orbit.

"They've been making use of all the technology they've been developing over the years in robotics to have a ready solution to mitigate the space debris problem," Shortt said.

"They are providing new life to satellites that would otherwise become debris.

"It's exciting to see that MDA is pushing this type of technology and are one of the first few who are out there marketing this service."

MDA (TSX:MDA) said it has not made a decision on whether to proceed with its Space Infrastructure Servicing Initiative.

The company recently announced that an agreement to provide on-orbit servicing to Intelsat's communications satellites has been terminated.

Intelsat uses satellites for telecommunications services which include broadcasting and data transmission.

The committee is currently being chaired by Canada and represents 12 space agencies around the world.

The CSA will host the IADC's 30th meeting in late May. It will be a first for Canada.