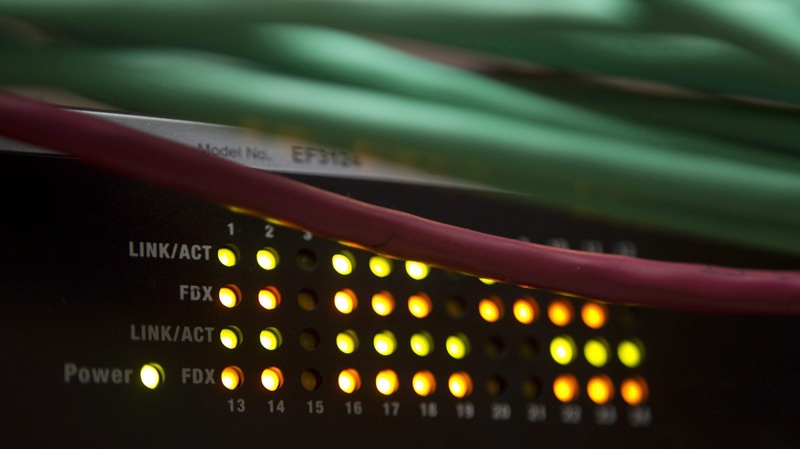 Lights on an internet switch are lit up in an office in Ottawa, on February 10, 2011. (THE CANADIAN PRESS/Adrian Wyld)

TORONTO - Canada's Internet economy is expected to grow by 7.4 per cent a year through 2016, better than the country's overall GDP but still lagging many global peers, according to a new study commissioned by Google.

The international study, conducted for Google by Boston Consulting Group, found that the Internet accounted for about $49 billion or three per cent of Canada's GDP in 2010, the latest year for which information was available.

However, that was lower than the G20 average of about 4.1 per cent of GDP and put Canada ninth among the G20 pack.

By 2016, the online economy's percentage of Canadian GDP is expected to reach 3.6 per cent, falling further behind an expected G20's average of 5.3 per cent, the study said.

That means Canada will fall to 12th among G20 members, overtaken by Mexico and Saudi Arabia.

One setback is that Canadian online shopping isn't as robust as it is elsewhere in the world, said Tawfik Hammoud, partner and managing director at BCG.

Canada was in the top quartile of those countries surveyed when it comes to participation in social media and advertising online. In 2010, online advertising took 28.8 per cent of overall advertising market share, second only to television.

"There's been more shift of advertising dollars from the offline world to the online world than in most countries," Hammoud said.

There are gaps in Canadian consumer behaviour that Google is hoping to close, said Google executive Colin McKay.

Canadians tend to research products online, but not actually make purchases on the web, unlike their American peers, he noted.

The results may also be affected by Canadians who shop online but from U.S. retailers who ship north of the border.

However, there are signs that Canadian small- and medium-sized businesses have also been more reluctant than their peers elsewhere in the world to develop an e-commerce strategy, Hammoud said.

"The Canadian consumer is heavily engaged, and basically is an active participant in the Internet economy and I think our companies need to follow suit," he said.

But Hammoud said both businesses and the government need to get more serious about boosting the online economy, one of the few sectors in the western world that is expected to experience high growth over the next 10 years.

"It will offset other industries and sectors that are actually in secular decline in Canada," Hammoud said.

The federal government could do a lot more to create incentives for the Internet economy to take off, he said, pointing to the governments of South Korea and Australia as examples.

"Canada needs a bit of a shot in the arm to get its e-economy growing going forward and if we don't do that we'll probably lose even more in terms of the ranking" Hammoud said.

The online economies of developing countries are expected to grow much faster than developed countries -- at 17.8 per cent through 2016, led by Argentina and India.