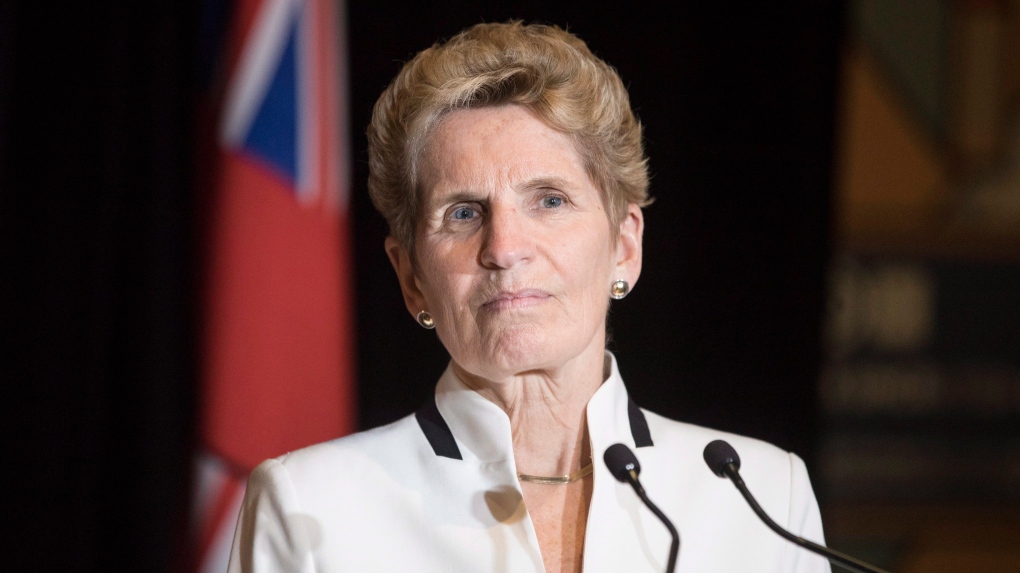 Ontario Premier Kathleen Wynne turns away from the podium after speaks with journalists in Toronto on Tuesday December 12, 2017. THE CANADIAN PRESS/Chris Young

TORONTO -- Municipalities can begin discussions with Ontario over costs associated with legalized marijuana in light of a new tax revenue-sharing agreement between the provinces and federal government, Premier Kathleen Wynne said Tuesday.

Wynne's comments come after Ottawa agreed Monday to give provinces and territories a 75 per cent share of federal excise tax revenues from the sale of legalized pot. The remaining 25 per cent -- to a maximum of $100 million a year -- will stay with the federal government. Federal revenues above $100 million will also go to the provinces and territories.

Municipalities have said they will shoulder most of the costs of marijuana legalization and want funding to offset the expense.

The premier said she was happy with the federal-provincial cost-sharing arrangement that will benefit local governments.

Ottawa introduced legislation in April with a goal of legalizing and regulating the use of recreational pot by July 1, 2018, but left it up to the provinces to design their own distribution systems and usage regulations.

Ontario was the first province to announce a detailed plan to sell and distribute recreational marijuana and legislators Tuesday passed a bill that would establish a framework for legalization.

Finance Minister Charles Sousa, who took part in the revenue-sharing talks with Ottawa, said one of his top concerns was ensuring municipalities were not "out of pocket" for a legalization plan that isn't something they created.

Sousa estimated Tuesday that excise tax could make as much as $450 million annually for the federal government and Ontario would be in line for 40 per cent of that revenue.

But Liberal MP Bill Blair, a former Toronto police chief and the Trudeau government's point man on legalizing cannabis, has estimated the excise tax could generate as much as $1 billion a year.

The minimum legal age to purchase cannabis in Ontario will be 19. The province also plans to set up about 150 standalone cannabis stores by 2020. The first wave of 40 stores will open in 2018, with that number slated to rise to 80 stores by July 2019.

A subsidiary of the Liquor Control Board of Ontario will run the stores and the agency itself is overseeing the process to establish their locations.

Consumption of legal weed will not be allowed in public spaces or workplaces in Ontario and will have to be confined to private residences, the province has said.

The government's plan has been met with anxiety by some municipal leaders who say the process has not provided them with enough information.

"Legal recreational cannabis will impact a wide range of important municipal services -- from policing to public health and beyond. It would be unfair for these costs to be a burden to property tax payers," said Association of Municipalities of Ontario president Lynn Dollin in a statement. "We have a shared interest in keeping communities and youth safe."

"I accept the federal framework, there's going to be marijuana legalized in Canada," he said. "I just want to make sure the police have their resources. They've expressed significant reservations that they don't have the resources and equipment right now to keep our streets safe."

NDP leader Andrea Horwath said with just over six months to go before legalization, municipalities still don't have the financial commitment they need from the province.

"We know that municipalities are already struggling with the downloading that the (Harper's) Conservatives did," she said. "It has not been completely addressed by the Liberals. Anything that adds costs to their bills is going to be a problem."