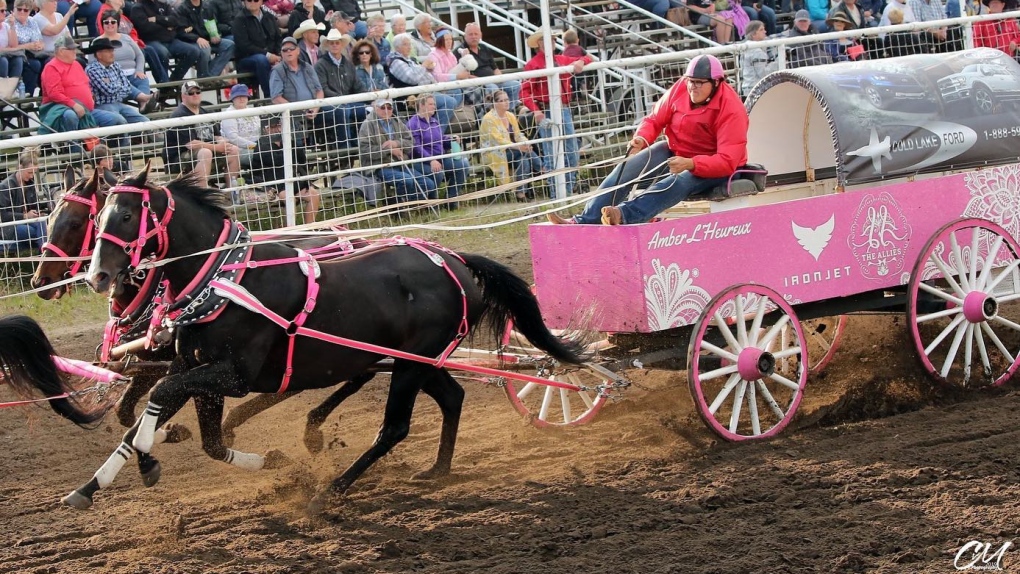 She’s watching the Calgary Stampede from the grandstand this year, but Amber L’Heureux hopes to one day become one of its featured performers.

L’Heureux, 26, took her biggest step yet toward that goal this spring, when she became the world’s first female professional chuckwagon racer.

She debuted May 31 at a Canadian Professional Chuckwagon Association event in North Battleford, Sask. With her hometown of Glaslyn, Sask., only 45 minutes away, L’Heureux had plenty of supporters in the crowd.

Since then, she’s taken part in a dozen professional races as the annual summertime chuckwagon tour has wound its way through Alberta. The fan support has stuck with her, too.

“Overwhelming, I think, is the best word to sum it up as,” she said Tuesday in an interview with CTV News Channel.

“I thought things would kind of simmer out and I could just race the rest of the year, but it just keeps spiraling.”

Often finishing near the back of the pack – not entirely surprising for a rookie – L’Heureux has nonetheless managed to crack the top 20 on a few occasions.

Every success is worth celebrating for L’Heureux, who was born into a rodeo family in Glaslyn. That upbringing gave her the opportunity to see the Prairies from a unique vantage point every summer from the age of 3, as she travelled the circuit with her parents, but also meant she was teased at school for being the “weird horse kid.”

“I have a passion for my horses. It’s just what I’ve always wanted to do,” she said.

“There was a lot of doubts from a lot of people, but I guess we’re proving them wrong a little bit.”

L’Heureux hopes to find the sort of “clean and consistent” driving that will help her rise in the standings during the second half of the CPCA season and improve her performance to the point where she can compete in Calgary as soon as next year.