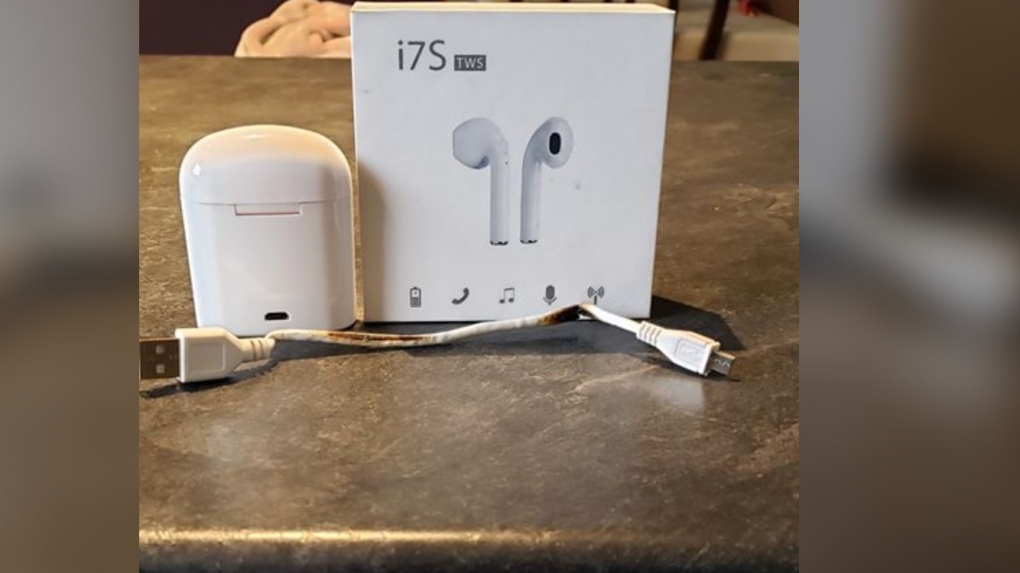 TORONTO -- An Ontario woman has issued a warning to consumers after ear buds she purchased at Canadian Tire caught fire on Christmas Day.

Mom-of-two Nicole Tarkovits bought a pair of wireless ear buds, similar to the much coveted and expensive Apple AirPods, from Canadian Tire in Cambridge, Ont., as Christmas gifts for her children.

She said her daughter’s pair caught fire after “half an hour” while charging for the first time.

“I had 20 people here cooking. I was trying to figure out where the burning smell was coming and I just caught it,” Tarkovits told CTVNews.ca via phone on Friday.

“We were very lucky we were home.”

Tarkovits caught the source of the burning before there was any damage to her home, but the charging cable is clearly charred.

She immediately posted a warning to her local consumer Facebook group.

The box for the buds bought at Canadian Tire is labelled “i7S TWS,” with no name. According to Tarkovits there is no information on where the product is manufactured other than “Made in China.”

She has not had the chance to return the products to Canadian Tire yet, but she would like a refund. The buds were bought for $20 each.

Parents faced a lot of pressure this Christmas to buy the exclusive Apple AirPods, priced from $219.

But some parents with younger kids opted for cheaper versions, with names like Skypods, Smartpods and Souljapods.

“Of course, my 13 and seven-year-old would lose them within the day,” Tarkovits said.

“I had quite a few people say (on Facebook) they had bought the same.”

Health Canada told CTVNews.ca that it “is committed to protecting Canadians from unsafe consumer products.”

“Health Canada will continue to monitor this issue and will take appropriate action to protect the health and safety of Canadians,” a Health Canada spokesperson told CTVNews.ca in an emailed statement.

“The department encourages consumers to report health or safety concerns about consumer products using our online reporting form as well as to the company from whom they purchased the product.”

AirPods were introduced in 2016 when Apple decided that the headphone jack was a thing of the past and removed it from its phones. Initially the move was soundly mocked and AirPods were viewed as inaccessible and silly.

But with celebrity endorsement AirPods quickly became a status symbol.

Apple’s wireless earbuds boast up to five hours listening time, according to the tech giant’s website.

The AirPods Pro, which are sweat- and water-resistant with a customizable fit, cost another $100 pricing them at $319.

A Twitter moment called “The great AirPods disappointment of Christmas 2019” compiled some of the best tweets expressing the dismay of some unwrapping gifts this Christmas morning.