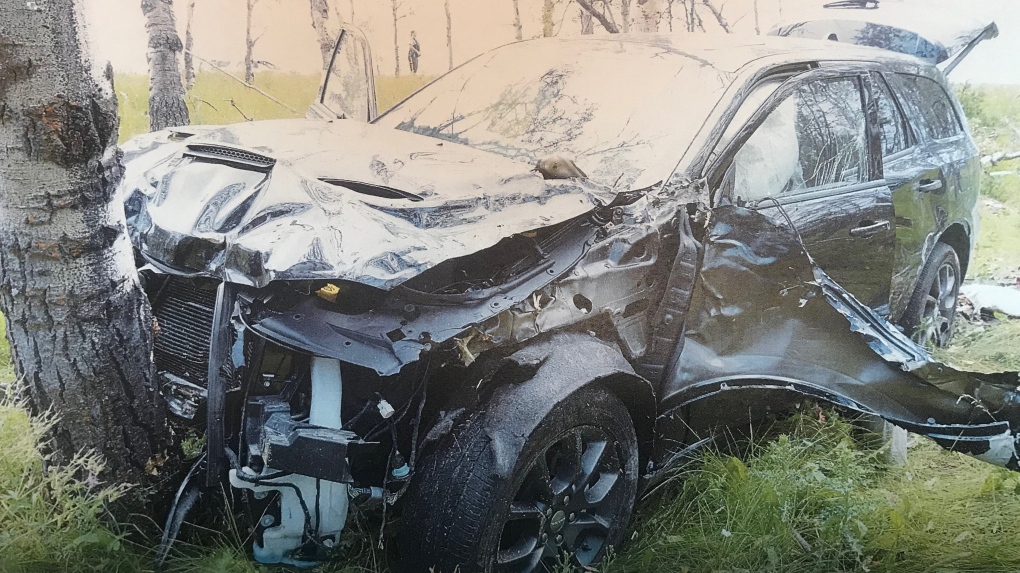 The crashed car of 60-year-old Horst Stewin who was shot in the left side of the head by someone in a passing car is shown in this undated court handout photo. (THE CANADIAN PRESS/HO-Alberta Courts)

CALGARY -- A witness to the shooting of a German tourist driving down an Alberta highway said he remembers hearing a loud clap, but couldn't say who pulled the trigger.

The man was testifying Tuesday at the trial of his brother -- a teen from the Stoney Nakoda First Nation -- who was charged last August after the 60-year-old tourist was shot in the head by someone in a passing car west of Calgary.

The teen, who cannot be identified because he was 16 at the time, is on trial for charges that include aggravated assault.

The witness, one of three people in the car with the teen that day, told court that they were all high on meth and vodka and he was in and out of consciousness during the drive.

"All I can say is it was a blackout day."

He said the driver pointed to Stewin's black SUV, said someone named Bubba was driving it, and then sped up and drove alongside. The driver said something, but the witness couldn't remember what.

"I told my brother 'don't,' but it was too late because it happened so quick," he said.

"A clap. All I heard was like when a vehicle drives into something ... a loud noise. I thought it was a gunshot."

He said he was looking over at the SUV when he heard the noise.

"I remember that German's head hitting the steering wheel and it went off to the left into the ditch. From there I was freaking out, blacking out," he testified in a low voice.

"The wife and the kids in the back were ducking."

The witness told court he remembers the car speeding off. He woke up as the driver was hiding it.

Prosecutor Dane Rolfe asked the witness to look at statements he made following the accident to help refresh his memory. He did remember a gun being in the car, but wasn't sure who fired it.

"Do you remember seeing anyone shoot a rifle that day?" Rolfe asked.

The trial has already heard from two other witnesses in the car. A woman on Monday identified the suspect as the shooter, but testified the driver had ordered him to pull the trigger.

The driver said he had no idea about the shooting until he heard a loud bang from the seat behind him.

Under cross-examination, Tuesday's witness said he did remember that a .22-calibre rifle was in the front of the car next to the driver's leg.

And he said he had heard about Bubba, who had reportedly beaten up the driver's younger brother and also drove a black SUV.

"Did (the driver) threaten you other three not to say anything?" defence lawyer Balfour Der asked.

"Yeah. He did point the gun at my chest too. He told me if I was going to tell he was going to shoot me," the witness said.

"He was going to blame me for being the driver and I wasn't driving."

Stewin was transported back to Germany where he had eight bullet fragments removed from his brain. He is paralyzed on his right side, gets confused and has memory issues.

His wife, son, and his son's girlfriend are to testify by video from Germany on Wednesday.