Ottawa was pelted by a record-setting snowfall as a winter storm hit much of central and eastern Canada following weeks of above-normal temperatures.

Measurements taken at Ottawa’s airport showed that the capital was blanketed by 51 centimetres of snow on Tuesday, the highest one-day total for the region. Those measurements are considered the official record.

Snow continues to fall in the area and a winter storm warning remains in effect.

The blizzard slowed traffic to a crawl, as OC Transpo buses got stuck in the thick snow and Ottawa police reported more than 100 collisions – most of them minor – throughout the day.

"It's almost as if nature had forgotten to give us a winter taste, and it's doing everything at once," Environment Canada senior climatologist David Phillips told CTV News Channel on Tuesday.

"There's a lot of misery to this particular event," Phillips said. 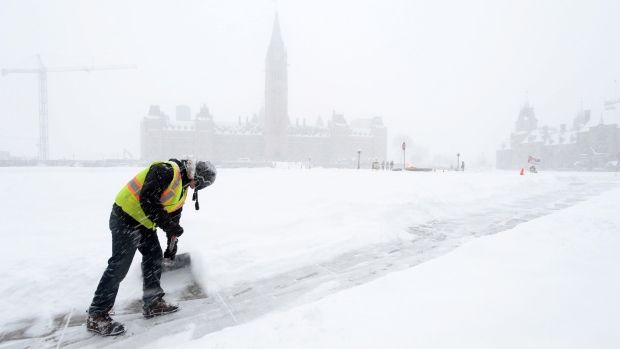 Freezing rain and winter storm warnings also blanketed much of Quebec following a weekend that saw temperatures reach -38C with the wind chill.

The national weather agency is warning that up to 20 millimetres of freezing rain is expected in the Montreal area, which could lead to significant ice build-up on roadways and sidewalks.

Freezing rain and rainfall warnings also extend east to much of Atlantic Canada, where temperatures are on the rise.

"They've got several centimetres of snow on the ground," Phillips said, noting that temperatures could rise to 10C in parts of Nova Scotia.

"A lot of that melting, along with a frozen ground, is going to create some water issues for them," Phillip said.

In Halifax, snow is expected to turn into rain, with up to 30 millimetres expected overnight and into Wednesday. In some parts of Nova Scotia, up to 50 millimetres of rain could fall.

Parts of the region felt a wind chill between -25C and -35C on Monday, but the temperature was expected to hit a high of 8C in the province's capital on Tuesday.

Total rainfall of up to 35 millimetres is expected in Fredericton, accompanied by mild temperatures and strong winds. 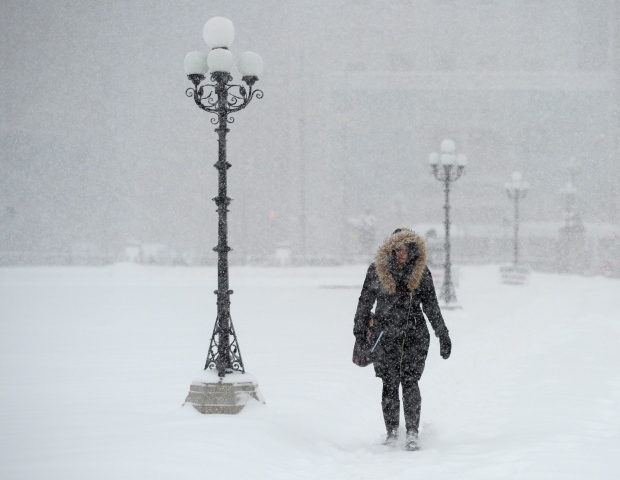 A woman makes her way to Parliament Hill through heavy snow as a major winter storm hits Ottawa.(Photos by Sean Kilpatrick / THE CANADIAN PRESS)

Residents in southern Ontario woke up to a wet snowfall on Tuesday morning, following a long weekend of record-breaking cold temperatures in much of the province.

"We've had temperatures at the beginning of the month of 16C and then 10 days later and high of -16C and the coldest Valentine's Day in parts of Ontario and Quebec," Phillips said.

Phillips said despite this latest bout of winter weather he expects to see "a move to spring" in March.

However, he added: "We still have to weather a few tough days before we get there."