Wildfires burning throughout British Columbia are prompting more evacuations and health advisories as a thick haze threatens air quality in parts of Western and Northern Canada. In Saskatchewan, residents whose homes continue to be threatened by wildfires are fleeing to neighbouring Alberta.

Here’s a roundup of the latest wildfire threats, including maps:

Wildfires burning throughout British Columbia are prompting more evacuations and health advisories as a thick haze threatens air quality in parts of Western and Northern Canada. In Saskatchewan, residents whose homes continue to be threatened by wildfires are fleeing to neighbouring Alberta.

Here’s a roundup of the latest wildfire threats, including maps:

The situation remains tense in Saskatchewan, where hundreds of Canadian troops arrived Monday to help crews fight the more than 112 wildfires that continue to burn, according to provincial government estimates.

More than 50 communities remained under a full or partial evacuation as of Tuesday, with approximately 9,000 people forced from their homes.

The most severe fires are approximately three kilometres north of La Ronge. Nearly 700 evacuees from the northern community are currently taking shelter in Cold Lake, Alta.

Officials say that the largest blaze, which had come within 1.5 kilometres of La Ronge, had stabilized on Tuesday afternoon.

Approximately a dozen homes, cabins and other buildings in Montreal Lake, Weyakin and Wadin Bay have been destroyed by the fires, which began raging last month.

According to the provincial government, there have been 582 wildfires so this season, compared to 205 in 2014. Steve Roberts, executive director of wildfire management for the Ministry of Environment, said Tuesday that six new fires had cropped up over the last 24 hours.

The government also estimates a total of 400,000 hectares are currently in the fire zone. Nearly 4,000-sqaure kilometres of land have been torched in high-priority fire zones, a number which is more than 10 times the yearly average.

A special helicopter tanker, which is believed to be the largest firefighting chopper in North America, has flown in from Montana and is now stationed in La Ronge.

The last time the Canadian Armed Forces were called in to assist with fires of this magnitude was in 2003.

A map by the Government of Saskatchewan shows active wildfires in across the province on July 7, 2015.

On the west coast, dozens of wildfires triggered by a heatwave continue to burn, prompting evacuations and health advisories.

According to the B.C. Wildfire Service, there were more than 1,000 people fighting 184 active wildfires across the province as of Tuesday night.

The province's Ministry of Forests has called in backup firefighters from Ontario and Australia for help.

Forests Minister Steve Thomson expects that 70 firefighters from Ontario will arrive in B.C. on Tuesday.

They will be joined by firefighters from Australia, while New Zealand crews are likely bound for Alberta.

Air quality improved in Metro Vancouver on Tuesday, but in Whistler, Environment Canada’s air quality health index listed the risk at 10. The federal agency advised all residents to stay indoors if possible.

The elderly, as well as people with heart and lung conditions, are being told to avoid outdoor exercise.

Meanwhile, approximately 800 people of been forced to leave their homes, or must be prepared to evacuate on short notice, officials said.

A fire official said Tuesday afternoon that eight evacuation orders and alerts have been issued due to the wildfires’ proximity to homes.

Employees at two pumice mines north of Whistler were also forced to leave the grounds, while campers were issued evacuation alerts in East Kootenay over the weekend.

Residents of 18 seasonal homes near Sechelt. 60 kilometres northwest of Vancouver, and other cabins near Port Alberni on Vancouver Island have also been evacuated.

A community in the province's southeast interior is also taking precautions, as some residents near Nelson have been placed on evacuation alert.

Port Alberni’s Coulson Group of Companies says the provincial government has agreed to use the Martin Mars water bomber, which can hold more than 27,000 litres of water.

Fire officials said Monday that there have been nearly 900 wildfires across the province the season began in early April.

A fatality is also being blamed on wildfires: the province’s coroner’s service said a 60-year-old man died Sunday while assisting forestry crews battle a wildfire in an area north of Vancouver. 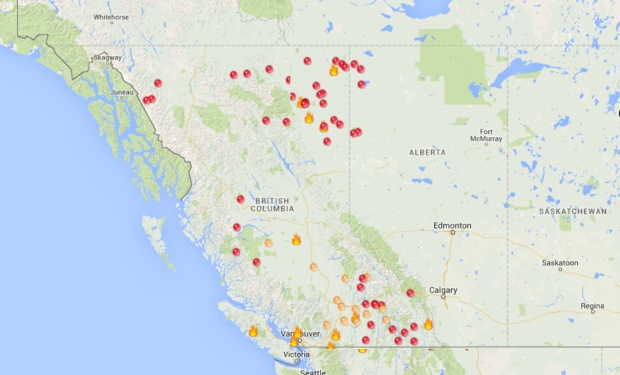 An interactive map by B.C.'s Wildfire Service shows active wildfires in the province on July 7, 2015.

As westerly winds spread thick smoke from wildfires in Saskatchewan, on Tuesday Environment Canada is warning residents of more than a dozen northern Manitoba municipalities of reduced visibility and poor air quality.

Those regions include Churchill, Flin Flon, Grand Rapids, and Shamattawa.

The smoke is expected to spread into southern Manitoba on Tuesday afternoon, and into the evening, Environment Canada said.

Smoky conditions caused by wildfires in the Northwest Territories and Northern Alberta prompted Environment Canada to issue air quality advisories for those areas on Tuesday.

Residents in Fort Chipewyan, Fort McMurray, Rainbow Lake and Wabasca are being advised to close and lock windows and doors in order to reduce the presence of smoke indoors.

People with cardiovascular conditions are being urged to monitor their symptoms in the midst of airborne pollutants, and take precautions if they worsen.

Even healthy individuals should be cautious, as smoke could cause eye and throat irritation and shortness of breath, the advisory said.

Alberta has been dealing with its own wildfires, including one that forced approximately 200 people from their homes in a remote northern Alberta community last Thursday.

RCMP said Tuesday afternoon that an evacuation order for North Tallcree First Nation has been lifted and 165 people were allowed to return home.

A precautionary evacuation order issued for Meander River has also been cancelled.

The residents were evacuated last week as a precaution, after flames from the fires came within three kilometres of the reserve.

As of Tuesday, there are 93 wildfires burning in the province, including 37 that are “out of control,” according to a government website. 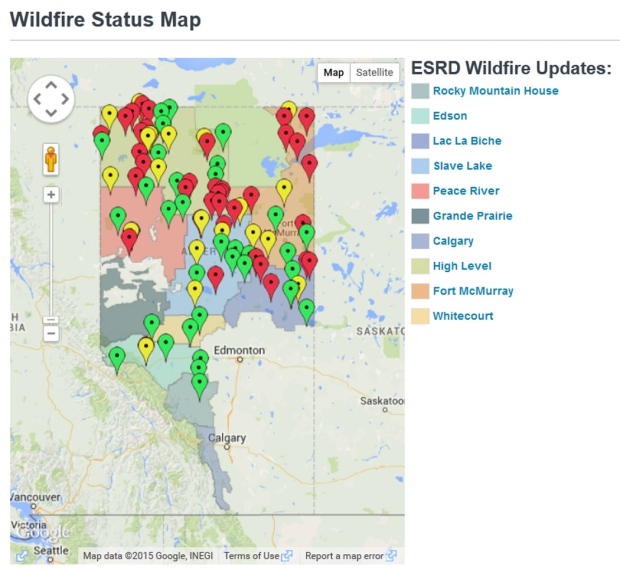 With files from CTV Vancouver and The Canadian Press