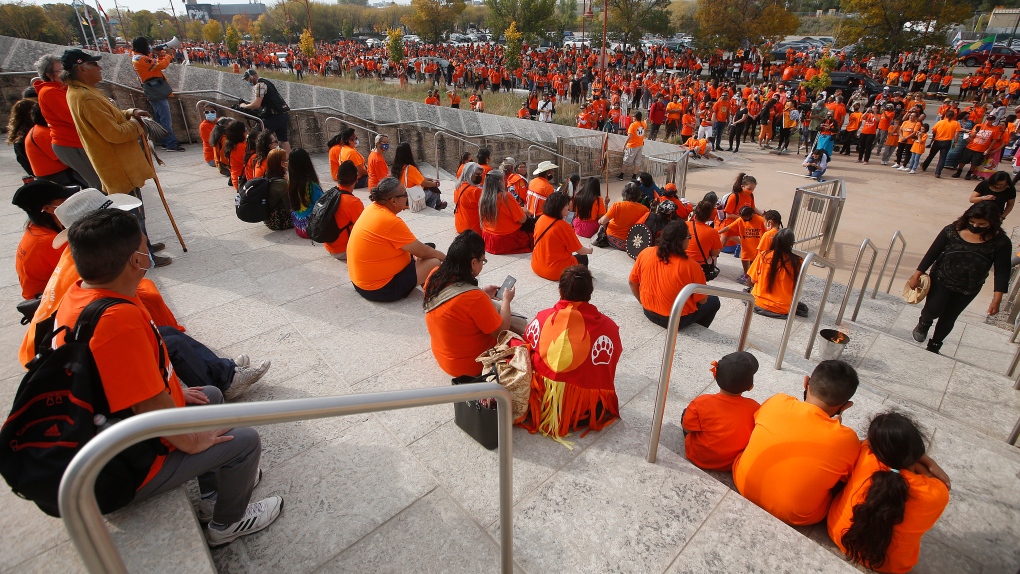 Residential School and Sixties Scoop survivors are honoured on the steps of the Canadian Museum for Human Rights in downtown Winnipeg on September 30, 2021. THE CANADIAN PRESS/John Woods

For those looking to buy an orange shirt ahead of Orange Shirt Day on Sept. 30, Indigenous designers are asking the public to make sure their purchase is actually going toward supporting the cause.

Tina Taphouse, an Interior Salish designer from St’at’imc territory around Lillooet, B.C., says it's important for Canadians to do their research to learn about the artist and to make sure their money is going to the right place.

"What I encourage people to do is when you're buying an orange shirt, try to find out about who the artist is and what was their inspiration behind the design for the shirt. And it would be great to support local artists," Taphouse told CTVNews.ca over the phone on Tuesday.

Taphouse, a 60s Scoop survivor and the daughter of a residential school survivor, was given up for adoption as a child so that she wouldn't be sent to a residential school. She's selling orange shirts with her own design that depicts two bears meeting with the Lillooet mountain ranges in the backdrop, representing the first time she was able to reconnect with her mother.

"Sadly, she passed away in August of last year. And she was with me when I was making orange shirts last year. And you know, I can still feel her presence with me this year when I'm making them," she said.

Orange Shirt Day was started by residential school survivor Phyllis Webstad in 2013 to raise awareness about the abuses committed in the residential school system. At six years old, Webstad attended her first day of school at St. Joseph’s Mission, where her brand-new favourite orange shirt she got from her family was taken away and never returned.

In 2021, after the discovery of unmarked graves at the former site of Kamloops Indian Residential School, the federal government fast-tracked declaring Sept. 30 a national holiday.

But the Kamloops discovery also sparked a rise in sketchy and dishonest online vendors selling orange shirts on online marketplace websites seeking to capitalize on the tragedy.

“In these recent reports, suspicious retailers seem to be using cause-related marketing strategies, where they lure in consumers with the pitch that … some of the purchase price will help charities connected to Indigenous Peoples," the Better Business Bureau said in a news release last year. "However, these retailer websites have no connections to the stated charities and are simply cashing in on your generosity and willingness to help others.”

However, major retailers such as London Drugs, Giant Tiger and Walmart are touting their partnerships with Indigenous designers to sell orange shirts and have announced that the proceeds from shirt sales will go toward Indigenous organizations.

Walmart's shirts were designed by Gitxsan artist Timothy Foster from the house of Niisto in the Lax Seel clan and the company says 100 per cent of the profits from the shirts will go to the Orange Shirt Society, which was founded by Webstad.

London Drugs says it's also sending 100 per cent of the profits from its orange shirt sales to the Orange Shirt Society. Its shirts were designed by Geraldine Catalbas, a Grade 11 student from Ponoka, Alta., who won a design contest organized by the Society.

Meanwhile, Giant Tiger says all of the proceeds from the sale of its shirts, designed by two-spirt Ojibway artist Patrick Hunter, will go towards Indspire, a charity focused on helping Indigenous youth.

But Taphouse notes that it's often much harder to make that personal connection with the artist if you buy from a massive retailer.

"I love talking to the people that buy the shirt. So, you know, that's something that you're not going to get if you're going to go to Walmart or Amazon," she said. "I always welcome questions and anything they want to ask."

"When you're buying a shirt just make sure you ask who the designer is. And if there's a story, what's the story behind it? Because it's more than just about wearing an orange shirt. It's about honouring residential school survivors and those who didn't make it."

High school basketball coach Sheldon Guy lost his vision – days later, he returned to coaching. CTV W5 reveals his emotional journey and the inspirational message he has for the players on his team.