Where will Prince Harry and Meghan live? In B.C., hopes of becoming home 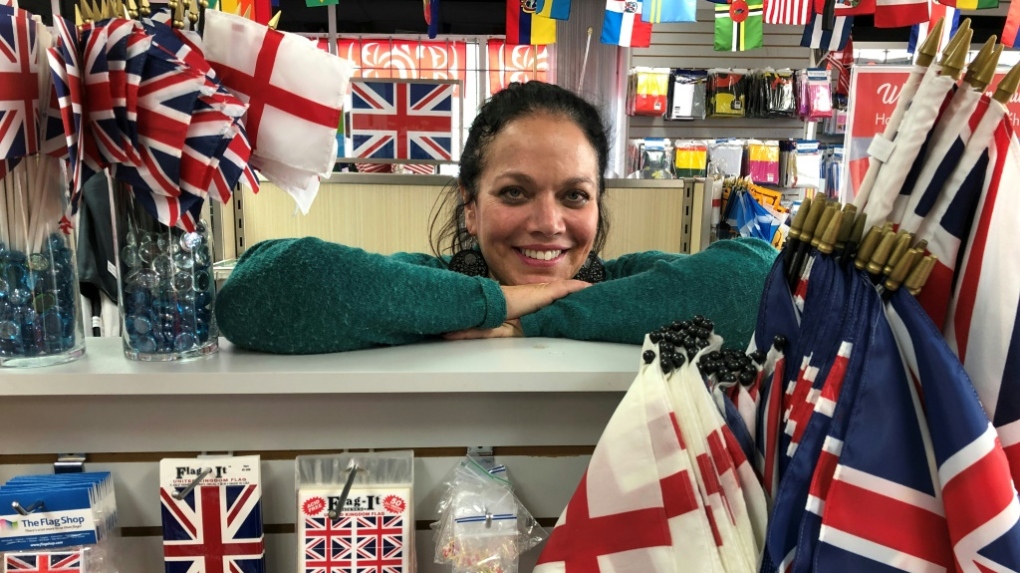 Susan Braverman, president of The Flag Shop in Vancouver, says there's been an uptick in local demand for the Union Jack and Saint George's Cross flags since Prince Harry and Meghan announced their move to Canada. (AFP)

VANCOUVER -- A striking sight, the Royal Standard flaps against the dark skies and unrelenting rains of Vancouver.

Monarchist Raymond Greenwood raised the Queen's banner atop his house just days ago to welcome Prince Harry and his wife Meghan after learning that the royal runaways were considering moving to his oceanside Kitsilano neighbourhood.

Locals surveyed by AFP are giddy about their move. Tourism groups are even more excited about the prospects of a boost from the global attention on the couple.

"I'm very, very happy," said Greenwood, president of the local branch of the Canadian Club and a volunteer at Tourism Vancouver; he is also known as "Mr. Fireworks" for having brought an annual international fireworks show to the city.

"I mean, who wouldn't want to run into Meghan walking her dogs in the neighbourhood," he said, referring to pictures published of Meghan out for a stroll in North Saanich, where she and Harry are now staying.

He quipped that he might set up a stand to sell royal memorabilia on the street, where Chip Wilson, founder of the Lululemon yoga-wear chain, also lives.

Canadian sales of the Union Jack and Saint George's Cross flags have already jumped, according to Susan Braverman, president of The Flag Shop.

She admits to being "a big fan" of Meghan from the days when the former American actress appeared in the television series "Suits," shot in Toronto.

Braverman, like others here, was quick to dismiss criticism of the Duke and Duchess of Sussex for their shock exit from their royal roles.

"We all want our kids to grow up and become independent, don't we? They're just spreading their wings," she said.

A matter of location

Where Harry and Meghan settle in Canada will likely depend on where they have the most support. Meghan's mother Doria Ragland lives in Los Angeles, and Vancouver is the closest Canadian city with direct daily flights.

But her best friend Jessica Mulroney -- married to the son of former Canadian prime minister Brian Mulroney -- is in Toronto, where Meghan spent years shooting "Suits."

The Maritime provinces are arguably the most vocally pro-monarchy.

If Harry craves flavors of Britain, Victoria (named after Harry's great-great-great-great-grandmother), with its multitude of tea rooms and double-decker buses, might feel more at home.

Canadian monarchists, often on guest lists for functions hosted by Gov. Gen. Julie Payette and provincial viceregals, are champing at the chance to rub shoulders with the prince and his wife.

"Selfishly, it's our hope that even if Prince Harry and Meghan are doing fewer royal duties overall, if they're doing them in Canada there'll be more for us," Bruce Hallsor, head of the Victoria chapter of the Monarchist League, told AFP.

He rejected critics, including Meghan's estranged father Thomas Markle, who assailed the couple for bowing out from representing the British monarchy.

"The idea that every member of the royal family should have a full-time role, be a patron of things and a ribbon cutter, is relatively new," Hallsor said.

"It's not part of royal tradition," he added. "It started in the media age."

As Greenwood said, "Let's be honest, there's enough members of the Royal Family over there (in Britain) for official duties."

Of greater concern might be whether their presence in Canada overshadows the Queen's official representatives, including former astronaut Payette.

"A charity or other organization would certainly be more interested to have Prince Harry as their patron than the viceregals," acknowledged Hallsor.

Wang, meanwhile, warned of potential political pitfalls should Prince Harry and Meghan choose to use their newfound freedoms to be more forthright.

He noted Meghan's "strong feelings" about a number of issues, pointing to her public thrashing in 2016 of U.S. President Donald Trump, which risks putting an unwanted spotlight on Prime Minister Justin Trudeau's own sometimes strained relations with the president.

The couple are also big proponents of climate action, which is in line with the values of most Canadians, but offside with its oil industry; Canada is the world's fourth largest oil exporter.

"There are certainly risks of stepping into political landmines," Wang said. "If they start attacking the oil industry, for example, I don't think the premier of Alberta would be too happy about it."