'What's the next mosque?': Imam talks of growing fear after Quebec attack 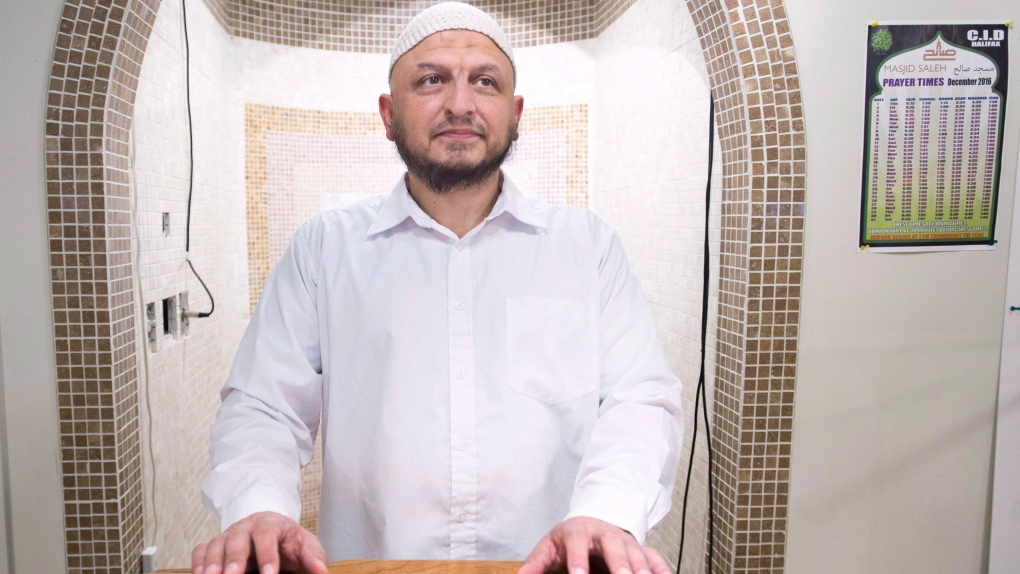 Imam Zia Khan is seen in the mosque at the Centre for Islamic Development, in Halifax, on Friday, Dec. 16, 2016. (Andrew Vaughan/The Canadian Press)

The attack that killed six men at a Quebec City mosque has stoked growing fear among Canadian Muslims with calls for increased security and awareness about the power of hate speech.

"It's not just that it's unsettling, it's scary," Imam Zia Khan of the Centre for Islamic Development in Halifax said Monday.

"What's the next mosque?" he asked. "It's not a good feeling. It's a feeling of the unknown."

Khan said he's already hearing from some local Muslim members who fear acts of violence will only escalate. They want more closed-circuit cameras to step up security measures.

The Quebec City shooting has shocked and frightened a minority Muslim community that was already on edge, Khan said in an interview. His mosque has been targeted in the past with graffiti and hate mail urging followers to leave the country.

Canadian Muslims have watched with dismay as prayer centres have been defaced across the U.S. over the last decade, he added. A mosque in Victoria, Texas, about 180 kilometres southwest of Houston, that went up in flames two days ago had been sprayed with hate graffiti and burglarized before.

"Many things have taken place but people always said: 'Oh, these are the people who are creating the problem all over the world, so who really cares?"' Khan said. "Sympathies were very little.

"But now, the problem is coming home here."

Two men were arrested Sunday after six men aged 39 to 60 were killed and several others wounded during the attack late Sunday in Quebec City's Ste-Foy neighbourhood. Police said Monday only one of the two men was considered a suspect. The other one was a witness, they said.

Last June, a pig's head was left at the entrance of the mosque called the Centre Culturel Islamique de Quebec. The shooting takes such actions to a new and terrifying level, said Salam Elmenyawi, spokesman for the Muslim Council of Montreal.

Local leaders will consult police on what worshippers should do "if, God forbid, it happens again," he said in an interview. "We have to ask the police to come in and explain to people how to behave and what to do in a situation like this.

"There's no defence against it. This has to be seen before they arrive."

Elmenyawi searched for words to describe what he was hearing Monday from fellow Muslims: "Shock. Disbelief. Grief. Anguish."

The Quebec City carnage has reinforced with brute force that threats can be acted on, he said.

"This is a psychic wound to the community -- not just a physical one."

In Toronto, Mayor John Tory said on Twitter that he had spoken with his city's police service "to make sure all steps are being taken to keep our citizens safe."

Abdul Nakua, an executive at the Muslim Association of Canada, said the Quebec City attack will spur mosques to "recalibrate" security measures with help from police. The challenge is that mosques are known as open-door sanctuaries for prayer and meditation.

"It's sort of oxymoronic to put security levels for that," Nakua said in an interview. "But it is what it is. We live in a time when safety and security is on the minds of many."

As more information about the Quebec City shooting emerges, Nakua said many are wondering the extent to which anti-Muslim rhetoric motivated the massacre.

"The election of (U.S. President Donald) Trump has been the peak of that," he said. "This is a wake-up call for all of us to really challenge this narrative, that political immediacy can overtake our cherished values, our constitutional rights."

Still, Nakua and other leaders took comfort from what they stressed are the vast majority of Canadians who deplore such acts. He hopes the legacy of Quebec City may even be greater, more vocal unity against racism and hate.

"I'm hopeful this can be a lightning rod for something big to happen, something good."

With files from Alison Auld