What are the shipping deadlines this year for holiday parcels?

EDMONTON -- Canada Post is bracing for an “all-out” effort this holiday season on the heels of an already record-breaking year.

Since the onset of the COVID-19 pandemic, the postal service says shipping demands have leap frogged to levels not anticipated for at least another three years, turning Canada Post’s business on a dime.

“That was our first of two Christmases in the year,” Canada Post spokesman Jon Hamilton told CTVNews.ca by phone Tuesday.

“We saw a rapid increase in parcel deliveries earlier this year, and we’ve applied everything we’ve learned throughout this unprecedented time to our holiday peak-season planning.”

Now, in the midst of a second wave and rolling lockdowns across the country, Canadians are being urged to “shop early and ship early” in order to get their holidays gifts under the tree on time.

“Delays at this point are minimal, but we still have a lot of road to go before Christmas and Cyber Monday, Black Friday are coming up this weekend,” said Hamilton.

“There will be many days over the next few weeks where we will deliver over 2 million parcels.”

In an effort to keep up with demand, Canada Post has hired an additional 4,000 seasonal workers, deployed 1,000 more vehicles across the country, and expanded delivery hours to the weekend.

FedEx Canada has also been running at peak level since March.

“In years past I would have told you what we would be projecting in terms of peak shipments, but this year we’re not offering a projection in terms of what we are expecting over the holidays. It’s just too fluid, it’s a year unlike any other.”

According to recent polling by FedEx, six out of 10 Canadians say they plan on waiting until December to finish their holiday shopping – a move Anderson says is likely to result in disappointment on Christmas Day.

“I urge you, if you have the means, shop as soon as you can.”

Local packages have to be mailed by December 18 for regular parcels or December 21 for flat rate boxes, Xpresspost and priority packages.

Packages being sent regionally, or within your province, should be sent off before December 15 to 17 for regular parcels, or by December 21 for Xpresspost and priority packages.

National packages have to be mailed by December 9 to 16 for regular parcels, by December 18 for Xpresspost, or December 21 for priority packages.

“If you’re shipping internationally, there are fewer planes in the air so it takes a little longer,” Hamilton noted. 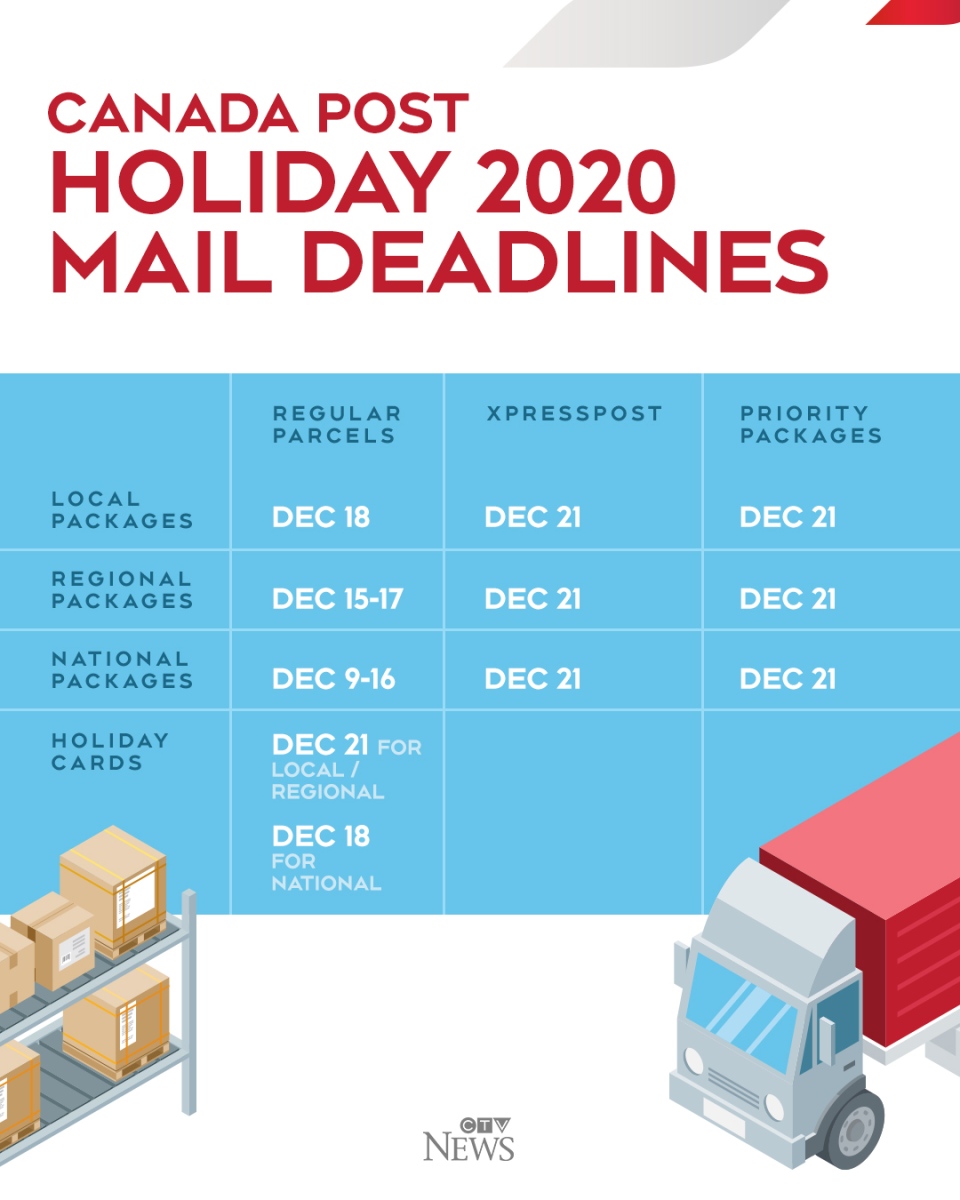 If you're in the habit of sending holiday cards, make sure you mail them by Dec. 21 for local and regional recipients or Dec. 18 for national delivery.

Hamilton notes that Canada Post has been working closely with businesses to provide shipping timelines. He says if you’re ordering from a retailer online, be sure to check their shipping information for ordering deadlines and track the items after purchase.

If you’re ordering a present and shipping it to yourself to wrap before sending off to the recipient, be sure to order early so you can meet Canada Post’s shipping deadlines.

And, whatever you do, don’t gift-wrap the outer parcel. It will likely get stuck in processing and cause further delays.

If you plan on sending a package through FedEx Ground, you only have until December 15 to ship your parcel for delivery before December 25.

FedEx Economy parcels being sent from western provinces to Atlantic provinces or rural regions must be sent by December 18, or December 21 for FedEx 2Day service.

Economy parcels being sent from other provinces must be shipped by December 21.

A full list of FedEx shipping deadlines, including international shipments, can be found here.