'What a waste': Woman shocked to discover bags of destroyed kids' clothes outside mall 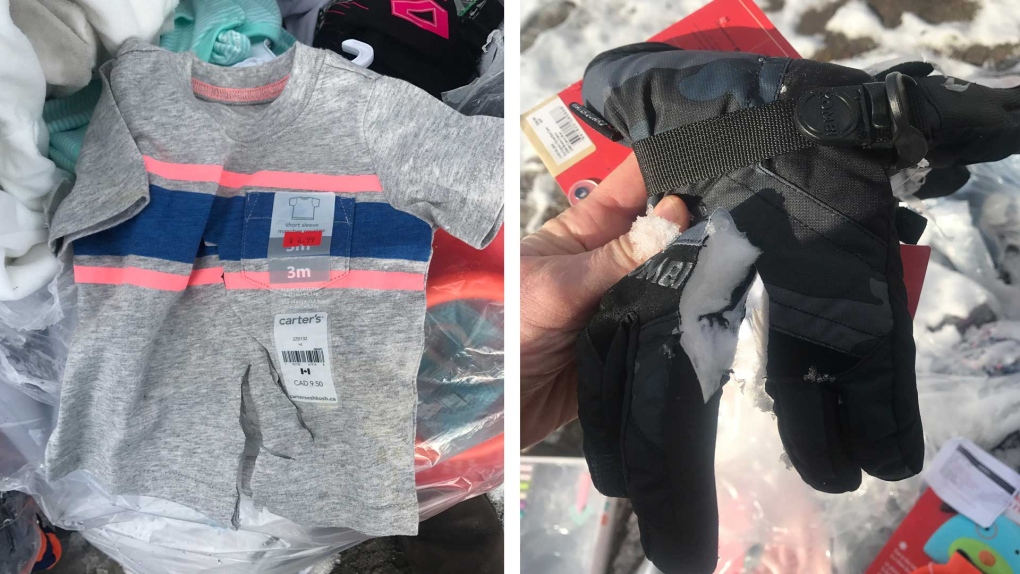 A Toronto woman is calling for Carter’s OshKosh B’gosh to reconsider its clothing disposal practices after she discovered bags of destroyed children’s apparel outside a mall. (Natasha McKenna/Facebook)

TORONTO -- Winter gloves split down the palm, snow pants slashed up the leg and children’s shirts cut through the torso. Those are just a few of the many damaged clothing items discovered in bags near a Toronto mall earlier this week, by a woman who is now calling for an apparel company to reconsider its disposal policies.

Natasha McKenna was near Toronto’s Dufferin Mall on Monday when she says she spotted a pile of clear garbage bags full of OshKosh B’gosh baby and children’s clothes and toys.

“They weren’t just thrown out,” she told CTVNews.ca. “These were cuts to destroy them.”

McKenna, a 39-year-old non-profit program manager, said it made her “sick” to dig through the bags to find “sliced shoes, smashed picture frames, cut up onesies and ripped up snowpants and gloves.”

“I kept pulling them out in shock,” she said. “What an incredible waste that went into the production of those clothes -- clothes that could easily be donated to a number of charities in the city or beyond when there are so many families and children in need.”

McKenna felt compelled to share what she found online the next day. “We can learn something shocking and leave it be, or we can hold people accountable,” she said. A Facebook post she wrote about the find the next day has been shared more than 10,000 times.

In a statement to CTVNews.ca, a spokesperson for Carters said the company policy is indeed to donate unsold products to local and national charity partners. “It’s a partnership we are honored to support -- donating tens of millions of dollars’ worth of unsold product over the last five years,” the statement said. “At Carter’s, we value our relationship with customers and giving back to our communities.”

Carters’ head office contacted the Toronto store in question, it continued, and determined that the items discovered by McKenna “were damaged or unusable and disposed of properly for safety reasons.”

“Our policy is to dispose of damaged or unusable product to prevent any potential harm to our customers,” the statement said.

It is unclear how the items of clothing were damaged.

The practice of destroying and disposing of unsold goods is apparently widespread in the retail world. In 2018, high-end fashion house Burberry made headlines for reportedly burning millions of dollars of unsold clothes. In an annual report, the company said its US$36.8 million worth of destroyed goods was part of efforts to preserve its reputation of exclusivity.

That’s just one of the reasons a clothing manufacturer might intentionally destroy damaged or unsold clothing, which is a “longstanding practice,” according to Anika Kozlowski, an assistant professor of fashion design, ethics and sustainability at Ryerson University in Toronto. She spoke with CTVNews.ca on the phone from Ghana where she is researching second-hand clothing waste shipped from Canada, the U.S. and Europe.

“You don’t want your brand being devalued by all of a sudden being flooded into Value Village,” she said. “They don’t want a homeless person taking them and wearing new Nikes.”

Even if clothes are donated, either locally or internationally, they might not end up doing much good, added Kozlowski. First of all, second-hand clothes may not last very long and are often well worn. “Most of the time what is donated is damaged,” she said. In Ghana, which imports 15 million pieces of donated clothing weekly, as much as 40 per cent -- including items like used underwear -- go straight to the garbage within a week, said Kozlowski.

“We just produce too much and we’re donating stuff that shouldn’t be donated,” she said.

Dated government regulations could also be blamed for the practice, she said. In Canada, companies can obtain a tax refund (called a “drawback”) on goods deemed “obsolete or surplus” that have been destroyed. In other words, there is financial incentive for apparel companies, who often stock their shelves with imported product, to claim the product is not sellable.

As long as there are tax incentives for companies to destroy product, the practice is unlikely to change, said Kozlowski.

“You have to target regulation. You have to give incentive for different avenues for those clothes,” she said. “Now that everything is being imported, that’s huge money for these companies. Everything always comes down to the bottom line.”