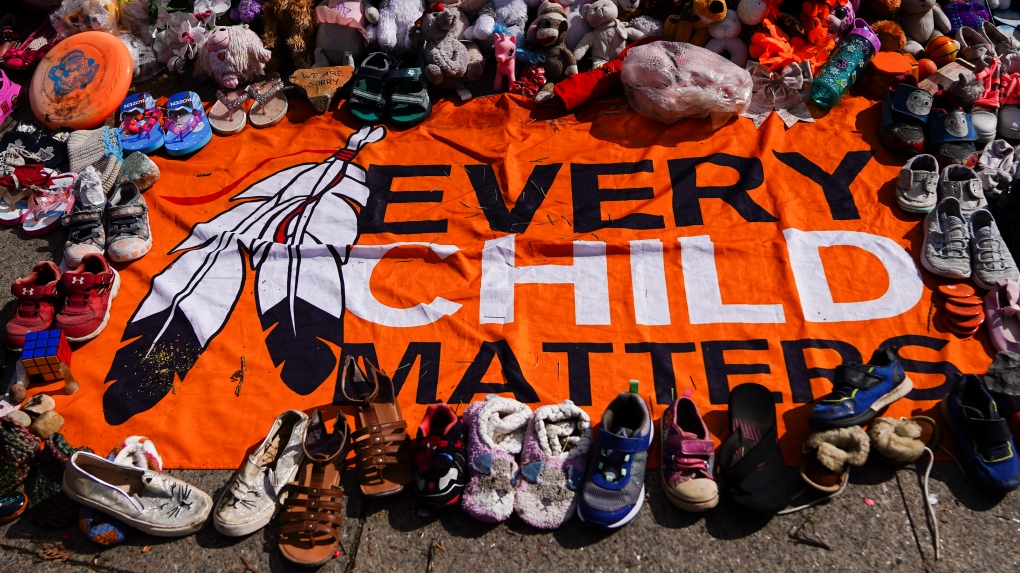 A memorial is displayed on Parliament Hill as ceremonies take place for National Day for Truth and Reconciliation in Ottawa on Thursday, Sept. 30, 2021. (THE CANADIAN PRESS/Sean Kilpatrick)

The other provinces and territories are choosing to observe the day in various ways, while some continue consultations with Indigenous groups and businesses about whether to make it a stat.

Some cities, schools and businesses are also choosing different ways to recognize the day.

New Brunswick was the latest to declare Sept. 30 a provincial holiday.

"While this is a day to commemorate the tragic history of residential schools and honour those who did not make it home, as well as their survivors and families, I would encourage all to reflect and be reminded that reconciliation is not just one day of the year," New Brunswick Aboriginal Affairs Minister Arlene Dunn said in a statement last week.

The day is set to be treated as any other provincial holiday. All essential services, including health care, will continue to be delivered. The holiday will be optional for private sector businesses, the province said.

Mi'gmawe'l Tplu'taqnn, a group representing Mi'kmaq communities in New Brunswick, said the day is set aside for people to remember and honour victims and survivors of residential schools, including children from First Nations who attended day schools.

"It's no secret our relationship with the (Blaine) Higgs government has been strained. Recognizing this holiday does not reconcile issues or differences with the Higgs government, but it is a step in the right direction," the organization said in a statement.

"By granting this holiday, the Government of New Brunswick is giving New Brunswickers an opportunity to reflect on how we can learn from each other and work together as treaty partners."

The day, originally known as Orange Shirt Day, was established in honour of the experience of Phyllis Webstad, whose gift of clothing from her grandmother was taken away on Webstad's first day at a residential school.

The federal government made the day a statutory holiday for its workers and federally regulated workplaces last year.

For many residential school survivors, including Eugene Arcand, the day will always be known as Orange Shirt Day and efforts at the grassroots level to acknowledge the pain and trauma Indigenous children were subjected to at residential schools should continue to be recognized.

Arcand, who is from Muskeg Lake First Nation in Saskatchewan, said he never thought he'd see a day dedicated to honouring survivors.

The discovery last year of what are believed to be 215 unmarked graves at a former school site in Kamloops, B.C., forced the country to listen to what survivors had been saying for years.

Since the discovery, numerous First Nations across Canada have begun their own ground-penetrating searches of school sites, Pope Francis delivered a historic and long-awaited apology on Canadian soil for the role the Roman Catholic Church played in running many of the residential schools, and a flag honouring those impacted by the schools was raised on Parliament Hill.

Arcand said these events will provide a better quality of life for future generations of children.

But, he added, it's up to non-Indigenous peoples to educate themselves.

"We shouldn't have to push people. It's important for people to determine for themselves how they want to get engaged," he said in a recent interview in Winnipeg.

"I'm not going to bang my head against the wall for the rest of my life trying to encourage people to engage."

The Saskatchewan government said it has no plans to make the day a statutory holiday for the province.

Matthew Glover, director of media relations, said the government is encouraging residents to take a moment to reflect and discuss the importance of meaningful reconciliation.

Flags are to be lowered to half-mast at all Saskatchewan government buildings.

The Manitoba government recently announced it would observe the day for a second year, while discussions continue about making it an official statutory holiday. Schools and non-essential government services and offices will be closed.

The province said it is continuing consultations with Indigenous and labour groups.

Wood, who lives in Winnipeg, is a survivor from Neyaashiinigmiing Ojibwe Territory in Ontario.

"It will really show that the sincerity of everything that's happened is taken seriously. It's 2022. We cannot continue to sweep anything under the rug. We have to recognize what's happening in Canada, and look at ways on how we can coexist," she said.

The day should be about educating the broader public about the legacy of residential schools, she added.

"It's our time to tell our narrative of the truth of the residential school system."