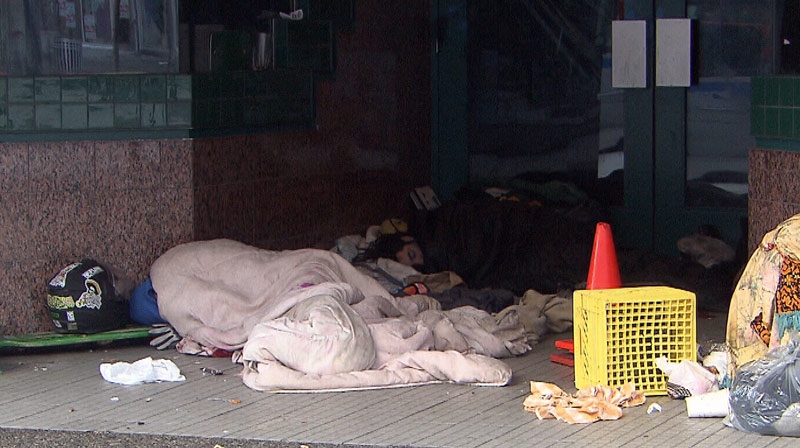 VANCOUVER -- Skyrocketing rents and dwindling affordable-housing units in Vancouver are driving seniors to the brink of homelessness, forcing some to couch surf, seek roommates or even live in cars, advocates say.

While the debate over the city's housing crisis often focuses on millennials, people who work with seniors say elderly adults have lower incomes and fewer supports to withstand being displaced from their homes.

"People end up living on the streets, or living in their cars, or crashing with friends, sleeping on the couch," said Linda Forsythe, a board member of 411 Seniors Centre Society.

"That used to happen a lot with young people," she said. "They could tolerate it quite well, and sort of get on with their lives, whereas, with older people, you don't have a chance to make more money. That's the problem."

Seniors are enduring the same rent hikes as other tenants in Vancouver, but have disproportionately lower incomes and higher medical costs. A provincial grant to help elderly renters has not kept pace, and subsidized units have decreased, experts say.

Shelter Aid for Elderly Renters, or SAFER, is a provincial subsidy applied to rent up to a certain cap. The rent cap in the Lower Mainland is $765 a month, even though the average rent for a one-bedroom apartment is $1,223, according to the Canada Mortgage Housing Corporation.

Outside the Lower Mainland, such as in Victoria or Kelowna, the rent cap drops to $667.

Over the past decade, average rents have risen 45 per cent but the cap has only gone up by nine per cent, said Isobel Mackenzie, B.C.'s seniors' advocate.

"The compounding effect presents the stark reality we have today, which is the huge gap between the SAFER cap of $765 in the Lower Mainland and the rent most people are paying," she said.

Mackenzie called on the province to increase the cap to parallel average rents and adjust it annually.

Elderly homeowners also face challenges. Mackenzie said she has asked the province to allow seniors to not only defer their property taxes but also other expenses, such as strata fees or utility costs, and to set up a borrowing fund for major repairs.

The number of seniors' subsidized housing units have decreased nearly five per cent since 2013, while wait lists have grown, she said.

Seniors are ending up in residential care before they need to because they can't afford their rent, Mackenzie added.

The B.C. government said in a statement that addressing the housing crisis is its top priority and it is working on a long-term, comprehensive plan it will roll out in its February budget.

It has set a target of building 114,000 affordable-housing units throughout the province, it said, and currently there are more than 2,400 units of affordable rental housing for seniors under construction or in development.

"They're having to choose between whether or not they pay their rent this month or they buy groceries, or they keep their power on, or they pay for the medications they need," he said.

In response to more seniors asking for help finding a roommate, Kupferschmidt's group is exploring setting up a program to help pair up older adults. It could involve a database of names or social events where people can get to know potential roommates, he said.

Language barriers and wait times are key issues, and immigrants sponsored by family aren't eligible for SAFER, she said.

"They want to be independent and they are unable to access some of these benefits," she said.

Even outside of Vancouver, seniors are struggling. Lola-Dawn Fennell, executive director of the Prince George Council of Seniors, recently told a House of Commons committee that most clients come to the centre in crisis.

"When you are already stretched to your monthly income and emotional and physical limits, a broken-down furnace or a bill collection notice or one more hour of caregiving can become a last straw," she said. "Yes, we see suicidal seniors."