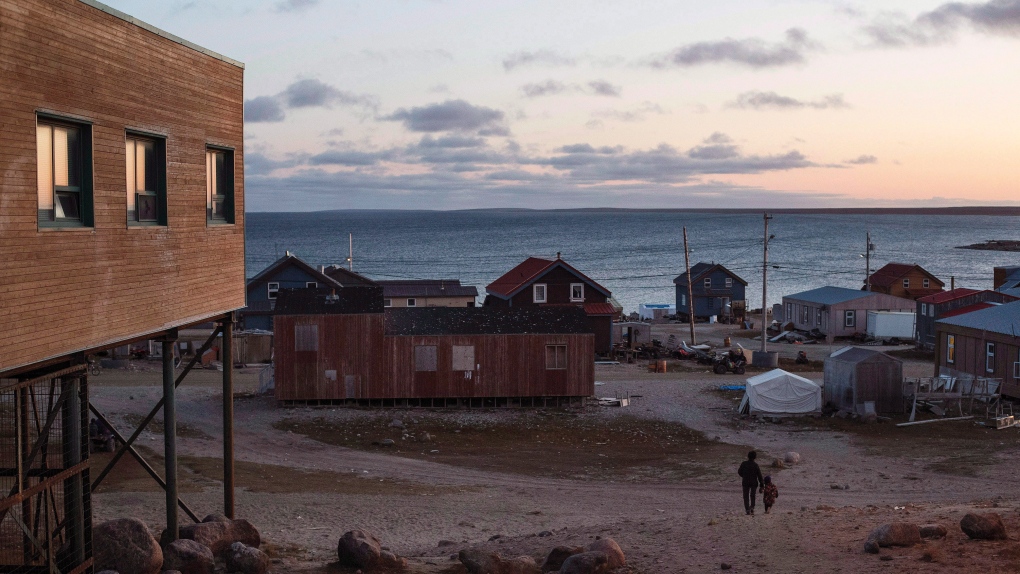 Residents walk down the hill to their home in the town of Gjoa Haven, Nunavut, on Friday September 1, 2017. THE CANADIAN PRESS/Jason Franson
GJOA HAVEN, Nunavut -

Tony Akoak's house sits atop what Gjoa Haven's residents call the uptown, a hill that overlooks the turquoise Arctic Ocean in the otherwise flat Nunavut community.

Inside, the living room walls lined with photos of his children and grandchildren, Akoak is watching the news on a Friday afternoon as a strong October wind whips up white caps on the water.

"My family is very important to me," he says as he smiles up at the photos from where he sits on a wooden chair.

Akoak, who has served as Gjoa Haven's member of the legislative assembly since 2013, says the hamlet of about 1,300 people is growing quickly and needs more mental-health services to support its population.

Before joining politics, Akoak worked for a decade at the Nunavut Legal Services Board's office in Gjoa Haven.

"I saw a lot of people that needed help," he says, tears welling up behind his glasses. "There's a lot of hidden mental illness here, people that are sick that won't say they are sick."

Gjoa Haven is nestled on the south coast of King William Island about 1,900 kilometres north of Edmonton. Like all of Nunavut's communities except Iqaluit, it doesn't have a hospital. It has one dedicated mental-health worker, but most diagnoses and treatments need to be done in southern Canada.

"The options are usually shipping people out, away from home, away from family."

Akoak says he's seen an increase in drug and alcohol use in Gjoa Haven in recent years, and worries that residents don't have enough support to deal with addiction.

There are mental-health resources in Nunavut's larger communities, including Iqaluit, which is two days of travel and 1,300 kilometres away. But smaller communities are falling behind, he says.

"The government is very, very slow in getting things done. We're being left out all the time."

A jury at a coroner's inquest this month into the police shooting death of 21-year-old Charles Qirngnirq in Gjoa Haven recommended that every community in Nunavut have more than one mental-health worker.

Victoria Madsen, acting assistant deputy minister of mental health and addiction, told the inquest that in 2016, the year Qirngnirq was killed, the government did not have a protocol for providing assistance to communities when there were critical occurrences.

Now, there is a "formal crisis response team" that flies to communities, but she said more needs to be done.

In Qirngnirq's case, the inquest heard that the 21-year-old had made suicidal comments before he showed up at the community's airport with a gun. RCMP said it appeared he turned and lifted the weapon. The coroner's jury ruled his death a homicide.

Madsen testified that it's often RCMP officers who respond to crisis calls, including situations where the person might be suicidal. There is no formal agreement between the RCMP and community mental-health workers to work together on such calls, but some are already doing it informally, she said.

"A mental-health worker would know how to assess for delusions and know that the erratic behaviour is actually because (someone is) thinking something or believing something that's not true."

An RCMP officer isn't able to decipher (whether) a person has schizophrenia, she said.

There's a pilot project in Iqaluit in which mental-health workers have been hired to work exclusively with the RCMP, but it will take a couple of years for that program to become full time, she said.

She said she agrees that Gjoa Haven needs its own mental-health facility and that, ideally, all of Nunavut's communities would have services in town.

Back in his kitchen, Akoak gently pulls a yellowed newspaper clipping from his fridge door. It's a photo of his granddaughter in the legislative assembly in Iqaluit when Akoak was first sworn in.

"I just want Gjoa Haven to be healthy," he says. "I want that for her."

This report by The Canadian Press was first published Oct. 31, 2021.

First case of rare monkeypox in the U.S. was someone who recently travelled to Canada

A rare case of monkeypox has been confirmed in a man in Massachusetts who recently travelled to Canada, according to the Massachusetts Department of Public Health.

Hundreds more fighters have emerged from the Mariupol stronghold where they made their last stand and surrendered, Russia said Thursday, and the Red Cross worked to register them as prisoners of war, as the end of a key battle in the conflict drew closer.