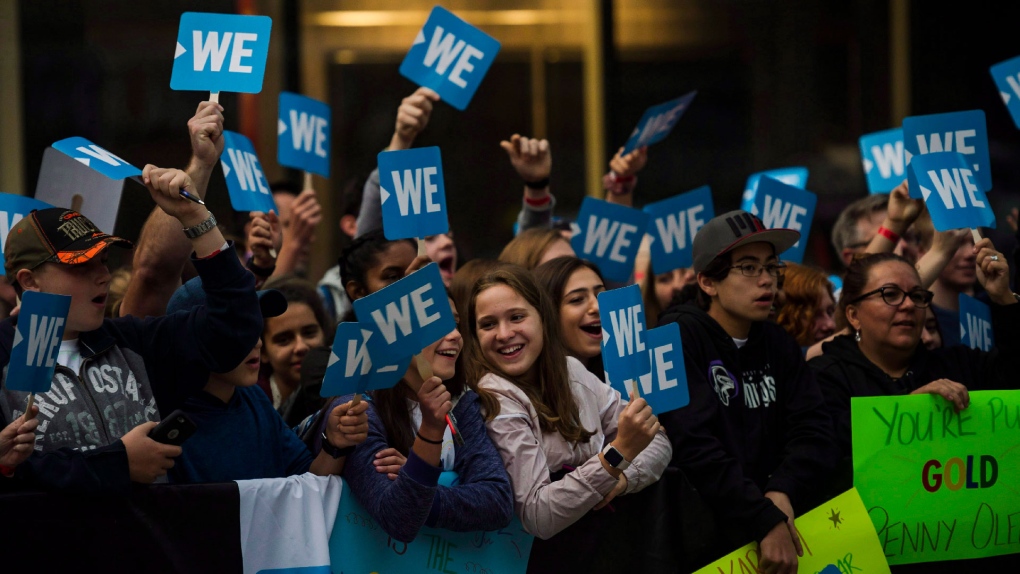 A crowd gathers before the WE Day red carpet in Toronto, on Thursday, September 20, 2018. (THE CANADIAN PRESS/Christopher Katsarov)

OTTAWA -- A man who once sat on the advisory board to WE Charity's American affiliate told a parliamentary committee he believes two different groups of donors were told they'd raised the money for the same school building in Kenya.

Reed Cowan testified on Friday that he started raising money for Free The Children, as WE Charity was known at the time, after his son Wesley died in an accident at age four.

He said he wanted to give Wesley a legacy and turn his "pain into purpose," but now feels like his son's grave has been robbed.

He said he discovered that a plaque on a school building that once bore Wesley's name now carries the name of another WE donor.

"I saw that the school that we had opened and put our plaque on with Wesley's name and his motto was no longer on his school," Cowan said.

One of the names now on the plaque is the Howie Stillman Foundation, he said.

On the foundation's website, he found a video of an "opening celebration, where they opened the very same building less than two weeks before we arrived there. We went to Kenya thinking we were opening that building for Wesley," he said. "The ceremony was re-cued for us, same people, same songs, same everything, different plaques."

For Cowan, knowing he'd build a specific school was important. He said he was told by Roxanne Joyal, the wife of WE founder Marc Kielburger and the current CEO of its for-profit affiliate ME to WE, that the school was "Wesley's school."

"When you give money to an organization a continent away, you wonder if it's real, and then I put my hands on the brick and it is," he told the committee.

He said thinking about children in Kenya studying at the school helps him deal with the loss of his son. It "gets me through a lot of nights," Cowan told the committee.

He said he believes it raised hundreds of thousands of dollars directly and that his efforts for the organizations, including speaking across the U.S., may have helped raise millions of dollars.

Now, he wants to know where it went.

"I've repeatedly asked for an accounting of all monies raised connected to Wesley Cowan's legacy and as of this date, I've not been provided that accounting," he told the committee. "I'd like it."

In an email, WE Charity said it's working to give Cowan the information he requested.

WE said Cowan misunderstood what was happening in the video he saw and that it was a "welcome ceremony" at the unfinished school for volunteers arriving to help build it.

"There was only one opening ceremony for the schoolhouse and it was for Mr. Cowan," the organization said in the unsigned email.

It said two of the four schoolhouses Cowan funded had plaques with Wesley's name. "One was removed in 2009 and WE regrets that it inadvertently failed to notify Mr. Cowan," it said, adding that the plaque has now been returned.

WE said the Howie Stillman Foundation provided funding for other programs in the community, including a clean water program.

WE said its projects in Kenya were reviewed by forensic accountant Al Rosen, "who confirmed that projects such as schoolhouses were not 'double matched."'

WE has previously said that review was commissioned by the Stillman Foundation.