Visitors flock to Quebec legislature to pay respects to Parizeau 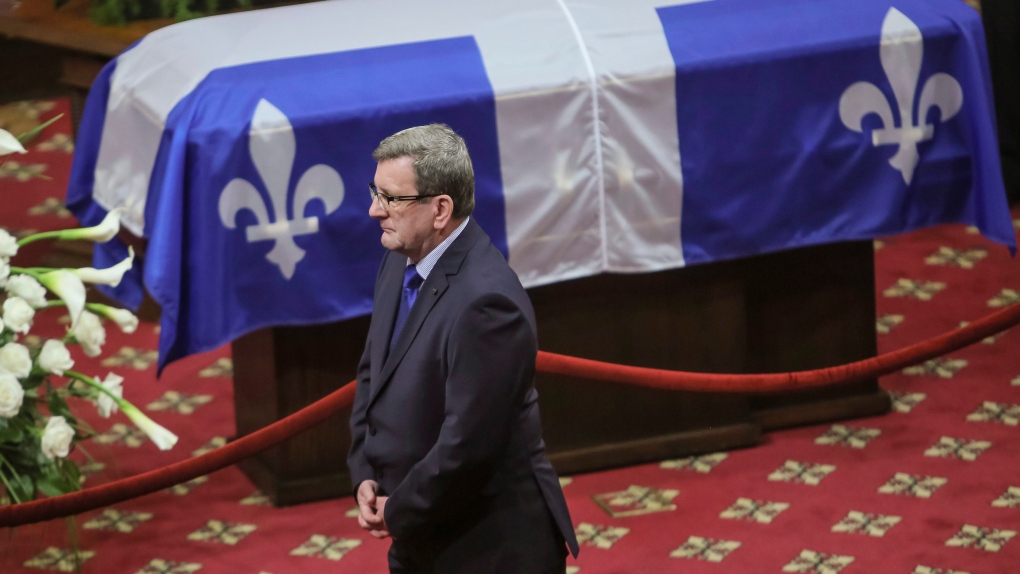 Quebec's legislature opened its doors on Sunday to allow citizens to pay their last respects to former premier Jacques Parizeau, one of its most famous representatives.

The funeral procession, led by Parizeau's widow Lisette Lapointe, arrived just before 10 a.m. after which the Fleur-de-lis draped coffin was brought into the large hall, transformed into a funeral parlour for the day.

This was the second day of public visitations for Parizeau, who died last week. Like Saturday's Montreal viewing, Sunday's event attracted long lineups of dignitaries and citizens alike.

By mid-afternoon hundreds of people had viewed the casket and offered their condolences to Lapointe and other members of Parizeau's family.

"He was such an inspiring man," said Gerald Gobeil, a Quebec resident who arrived early with a group of friends.

"He carried the independence project forward but we can't forget what he did, with others, for the Quiet Revolution. We can't forget who we were before Parizeau and company arrived," he said.

In the line of citizens, retired policeman and Parizeau's former bodyguard, Victor Landry, waited patiently for his turn to enter the building.

"He was a role model for me, an accomplice," said Landry, who worked on Parizeau's security detail from 1988 to 1998. "He always told us, 'I do politics, you do your work, I have total confidence in you.' He never made any comments on our way of work."

Among the dignitaries, Parti Quebecois leader Pierre Karl Peladeau visited Parizeau's casket for a second day in a row. Speaking to reporters, he highlighted Parizeau's role in creating the provincial pension fund manager and state-run investment company and said he gave "hope" to the people of Quebec.

The leader of the opposition party Coalition for Quebec's Future, Francois Legault, said that Parizeau gave the people of Quebec pride.

Because he gave them confidence in their means, all Quebecers, regardless of political convictions "are his heirs," he said.

The state funeral for Parizeau, who died last Monday at the age of 84, will take place Tuesday in Montreal.