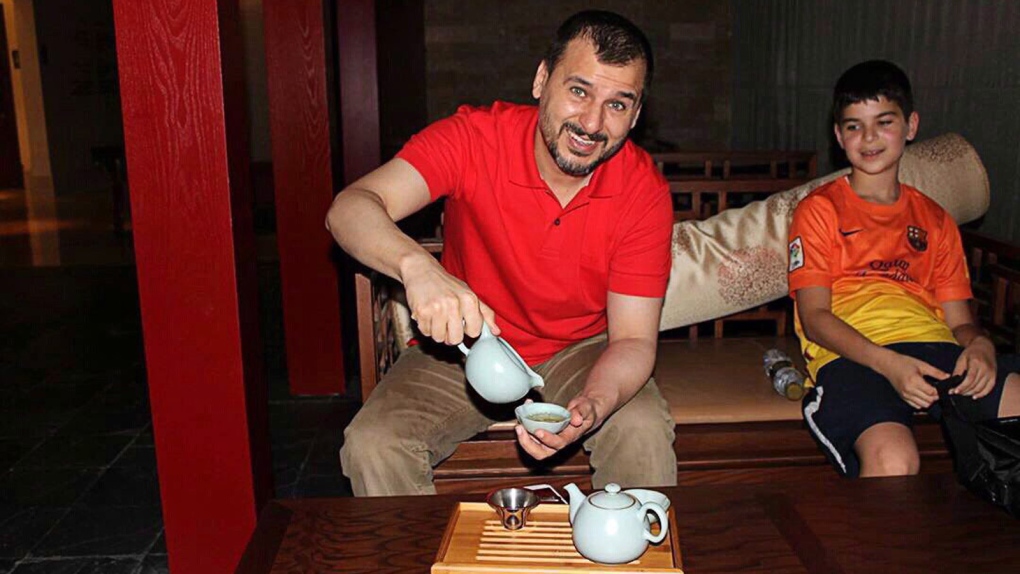 Canadian Salim Alaradi and his son, Mohamed Alaradi are shown on a family vacation in the United Arab Emirates in a 2013 family handout photo.(HO / THE CANADIAN PRESS)

Several U.N. human rights experts urged the United Arab Emirates on Monday to immediately release a Canadian man and four others who have allegedly been tortured over the last year and a half.

The call came as Salim Alaradi's trial proceeded at the U.A.E. Federal Supreme Court, where the Canadian businessman of Libyan origin has pleaded not guilty to three terror-related charges.

It was also timed with the publication Monday of an opinion by the U.N. Working Group on Arbitrary Detention, which examined the cases of Alaradi and his fellow detainees late last year.

The 13-page opinion cited advocates for the detainees alleging that the men had been deprived of sleep for up to 20 days, beaten on the hands and legs and suffered "electric shocks with an electric chair."

Some had been "hung with a rope around the neck" or had faced "constant death threats with guns being placed at the head," it added.

The five-member working group which produced the opinion is neither a court nor a tribunal and has no power of enforcement. It can call countries and their leaders to account based on their own commitments to international conventions.

The group's conclusions were referenced in a statement issued Monday by leading U.N. experts who asked the U.A.E. to respect the rights of the detained men and release them unconditionally.

"We have received credible information according to which the detainees were tortured and forced to sign confessions," UN Special Rapporteur on torture, Juan E. Mendez, said in the statement.

"The suspects have been also allegedly held incommunicado in secret detention locations and in solitary confinement for prolonged periods of time. This is very troubling as it reinforces the risks of being tortured or ill-treated."

The UN Special Rapporteur on the right to health further noted that most of the detainees suffer from serious health conditions, including permanent loss of sight and hearing and risk of paralysis, due to alleged torture and minimal access to medical care.

The experts said a reply from Emirati authorities about the detainees' cases was "unpersuasive."

"This is the most significant action we can get from the U.N. human rights system," said Paul Champ. "It really corroborates and supports what we've been saying all along, which is that this legal process and these charges have really been a sham and really a cover up for Mr. Alaradi's abuse and torture."

Champ added that Alaradi's family hoped international pressure and attention on the case would lead to charges being dropped.

Alaradi's case was briefly in court Monday, where his family said a judge agreed to a forensic medical exam for the 48-year-old before adjourning proceedings to Feb. 29.

Two specific groups -- the February 17 Brigades and the Libyan Dawn -- were named in connection with his charges.

Champ has emphasized that Alaradi has not lived in Libya in over 25 years and "is not politically involved in his former country."

The start of Alaradi's trial in January was nonetheless seen as a sign of progress for the man and his family, who had previously received no explanation from U.A.E. authorities for his continued detention.

Global Affairs Canada has said Canadian officials "at very high levels" have raised concerns about Alaradi with U.A.E. authorities, adding that the Canadian government is working to ensure "a prompt and just resolution" of the case.

Alaradi was running a business in Dubai when he was abruptly arrested in August 2014.

He was born in Libya and immigrated to Canada from the U.A.E. in 1998, settling in Vancouver with his family. He decided to return to the U.A.E. in 2007 to run a home appliance business with his brother.

He and his family were on vacation within the U.A.E. when he was arrested.

Amnesty International has noted that Alaradi was among 10 men of Libyan origin detained in the U.A.E. at the same time. Some of those men have since been released.

The U.A.E. was part of the NATO-led coalition that ousted longtime Libyan leader Moammar Gadhafi in 2011 and has taken a keen interest in the country's future since.

-- with files from the Associated Press.