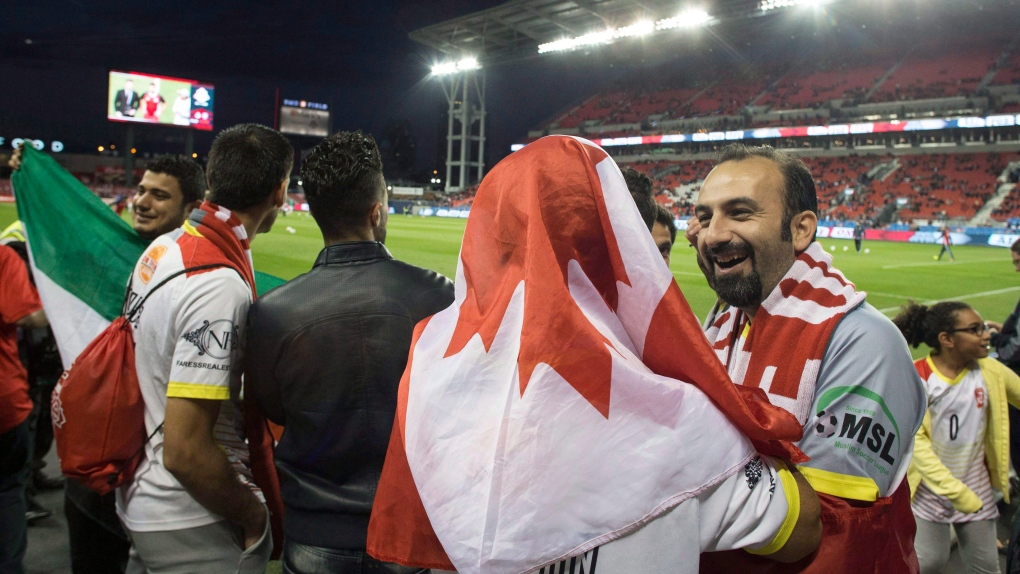 Syrian refugees gather to watch warm up ahead of Toronto FC's MLS game against Orlando City in Toronto, on Wednesday, Sept. 28, 2016. (THE CANADIAN PRESS/Chris Young)

WASHINGTON -- The United States appears to be working toward a system for privately sponsoring refugees, potentially making it the latest country to emulate the program Canada has deployed during the Syrian migration crisis.

A group that works with the government on resettling refugees says a pilot project is in the works. An assistant secretary of state reportedly referred to it at a public forum. Canada's immigration minister says he has heard about a pilot project, and one small-government advocate says he's been advising policy-makers on it.

David Bier of the libertarian Cato Institute said he used the experience of the northern neighbour while making the case to government officials that the private sector could play a bigger role in resettling refugees.

He said there was initial reticence when he first discussed it last year with government officials, but he said the White House became enthusiastic and the State Department got involved in the details.

In the meantime, the Canadian program started getting international attention.

"The fact that it was already in operation in Canada and had proven successful was invaluable to our advocacy," Bier said in an interview. "I have no doubt that this is going to happen (in the U.S.). This is something that's part of the agenda and is being developed by the most important actors in the American refugee system."

The Canadian program allows people to sponsor a refugee for $12,600, which includes help with income and initial costs like groceries and rent. Nearly half the Syrian refugees Canada brought in starting late last year entered through private or quasi-private initiatives.

At least 13 countries have made inquiries about emulating the program, said Canada's immigration minister John McCallum. Australia and New Zealand have adopted such programs, and McCallum said the United Kingdom is working on one.

"We're definitely the pioneers in it," he said in an interview. "I think this is a model that would be of some value all over the world, given that we face a huge global refugee crisis...

"I understand that (the U.S.) is going ahead with a pilot project in this area."

The White House didn't confirm or deny its intentions when asked last week.

The refugee issue is an incendiary one in this election season. Republicans are fighting a migration increase, with Donald Trump warning that the Syrians represent a threat. Democrats insist they can be carefully screened, unlike in Europe; they say the U.S. can do far more than the 10,000 it has accepted so far.

Bier said the government has the power to do it under existing legislation.

In fact, he says the U.S. has a long history with programs like this.

Contrary to popular belief, the U.S. experience may predate Canada's program. As he researched the issue, Bier realized private sponsorship from relatives and organizations helped bring in hundreds of thousands of Holocaust survivors after the Second World War.

Then during the Cold War, he said, Ronald Reagan allowed private donors to bring in 16,000 Cubans and Soviet Jews.

Canada's program was born between those eras.

It occurred with little fanfare in 1976. It was embedded in a little-noticed provision of the landmark 1976 Immigration Act. Newspaper articles of the day didn't even mention that part of the law. They focused on its major reforms to the immigration system -- the law created annual quotas, the modern points system, and a new family category. It deleted outdated language banning "idiots, imbeciles and morons," and ended limits on epileptics.

Around that time, the city of Windsor, Ont., had a mayor and a priest working together to help Indochinese refugees. According to research from the University of Windsor's Giovanna Roma, on that panel with Mayor Bert Weeks and Rev. Robert Warden were federal officials. Those officials informed municipalities of new provisions of the 1976 act, and it spread to bigger cities. The federal program was officially launched in 1978, and then championed by other mayors like Ottawa's Marion Dewar.

Some of the refugees bumped into brutal nativism -- one example Roma cites in a paper is a 15-year-old Vietnamese boy who was beaten at school and wound up in a Windsor intensive-care unit.

Roma's paper for the "Refuge," published by York University's Centre for Refugee Studies, mentions that the mayor and priest in Windsor were driven by shared socialist values. In the U.S., however, a vocal proponent is driven by opposite politics.

"I'm a libertarian," Bier said. "We really thought that, right now, the government in the United States does everything on refugee resettlement. We felt like the private sector could really supplement what the government was doing."